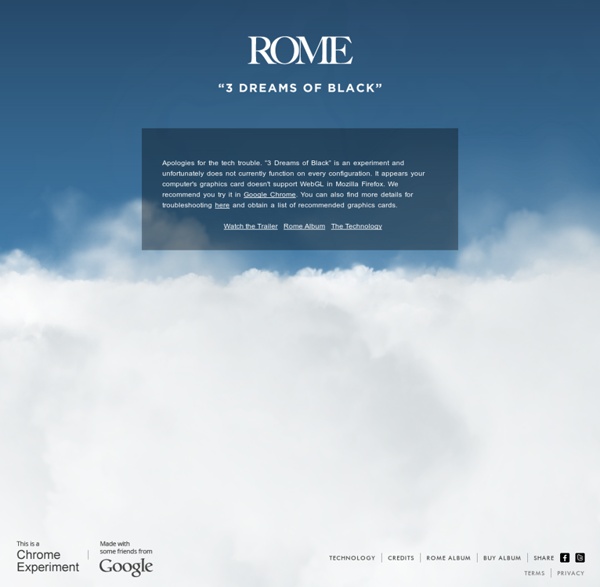 Magazine Directory - Magazines Online Backpacker The magazine of wilderness travel. Backwoods Home Solid, practical, hands-on information on a wide range of self-reliance topics. Barron's A guide to what's happening on Wall Street and all the International Markets: Who won, who will win, what happened and what's to come. Read by armchair investors and professional traders alike. NeHe Three.js tutorials Introduction To render amazing 3D scenes, nowadays no more plugins or additional installations are required. The most widespread Browsers like Chrome, Firefox, Safari, Opera and Internet Explorer support WebGL, the hardware accelerated OpenGL for browser. 10 Psychology Tricks You Can Use To Influence People Humans Before we get started, it’s important to note that none of these methods fall under what we would term the dark arts of influencing people. Anything that might be harmful to someone in any way, especially to their self esteem, is not included here. These are ways to win friends and influence people using psychology without being a jerk or making someone feel bad. Trick: Get someone to do a favor for you—also known as the Benjamin Franklin effect.

Project Syria: Premieres at the World Economic Forum  PROJECT SYRIA: AN IMMERSIVE EXPERIENCE Nearly a third of the population has been displaced in the ongoing war in Syria and no group has been as severely affected as the children. According to a joint statement issued by the United Nations High Commissioner for Refugees (UNHCR) and UNICEF last August, one million children have already been forced to flee Syria since the start of the country’s civil war. Some news reports indicate that children are actually being specifically targeted in the violence.

Download & Streaming : Moving Image Archive : Internet Archive by Internet Archive collection eye Physijs - a physics plugin for threejs Examples Physics plugin for three.js Physijs brings a very easy to use interface to the three.js framework. One of the reasons three.js is so popular is because it is so incredibly easy for graphics newbies to get into 3D programming. The Reality of Repressed Memories In 1990, a landmark case went to trial in Redwood City, California. The defendant, George Franklin, Sr., 51 years old, stood trial for a murder that had occurred more than 20 years earlier. The victim, 8-year-old (Susan Kay Nason, was murdered on September 22, 1969).

What It’s Like to Try Magic Leap’s Take on Virtual Reality Breakthrough A device that can make virtual objects appear in real life. Why It Matters The technology ­ could open new opportunities for the film, gaming, travel, and telecommunications industries. Three.js and Babylon.js: a Comparison of WebGL Frameworks Today’s web browsers have come a long way since the days of Sir Tim Berners-Lee and his Nexus software. Thanks to fantastic JavaScript APIs like WebGL, modern browsers are fully capable of rendering advanced 2D and 3D graphics without help from third-party plugins. By leveraging the horsepower of dedicated graphics processors, WebGL gives our web pages access to dynamic shading and realistic physics. As you might have guessed, such powerful APIs typically come with a drawback.

Social exclusion Social exclusion (also referred to as marginalization) is a concept used in many parts of the world to characterise contemporary forms of social disadvantage and relegation to the fringe of society. It is a term used widely in the United Kingdom and Europe, and was first utilized in France.[1] It is used across disciplines including education, sociology, psychology, politics and economics. Social exclusion refers to processes in which individuals or entire communities of people are systematically blocked from rights, opportunities and resources (e.g. housing, employment, healthcare, civic engagement, democratic participation and due process) that are normally available to members of society and which are key to social integration.[2] The resulting alienation or disenfranchisement is often connected to a person's social class, educational status, relationships in childhood[3] and living standards.