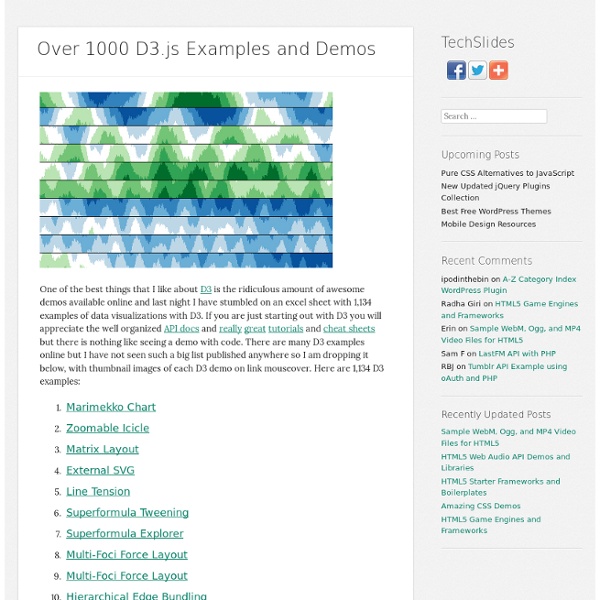 Interactive Data Visualization for the Web Copyright © 2013 Scott Murray Printed in the United States of America. O’Reilly books may be purchased for educational, business, or sales promotional use. Online editions are also available for most titles ( For more information, contact our corporate/institutional sales department: 800-998-9938 or <corporate@oreilly.com>. Nutshell Handbook, the Nutshell Handbook logo, the cover image, and the O’Reilly logo are registered trademarks of O’Reilly Media, Inc. Many of the designations used by manufacturers and sellers to distinguish their products are claimed as trademarks. While every precaution has been taken in the preparation of this book, the publisher and author assume no responsibility for errors or omissions, or for damages resulting from the use of the information contained herein.

sahat/hackathon-starter Home · mbostock/d3 Wiki A Tour Through the Visualization Zoo Jeffrey Heer, Michael Bostock, and Vadim Ogievetsky Stanford University Introduction Thanks to advances in sensing, networking, and data management, our society is producing digital information at an astonishing rate. According to one estimate, in 2010 alone we will generate 1,200 exabytes — 60 million times the Library of Congress. Within this deluge of data lies a wealth of valuable information on how we conduct our businesses, governments, and personal lives. The goal of visualization is to aid our understanding of data by leveraging the human visual system's highly-tuned ability to see patterns, spot trends, and identify outliers. Creating a visualization requires a number of nuanced judgments. In this article, we provide a brief tour through the "visualization zoo," showcasing techniques for visualizing and interacting with diverse data sets. Each visualization is accompanied by an interactive example: click the image to load the full visualization. Time-Series Data Index Charts Maps

xml - SQL Server SELECT to JSON function The 20 best tools for data visualization | Design tools It's often said that data is the new world currency, and the web is the exchange bureau through which it's traded. As consumers, we're positively swimming in data; it's everywhere from labels on food packaging design to World Health Organisation reports. As a result, for the designer it's becoming increasingly difficult to present data in a way that stands out from the mass of competing data streams. Get Adobe Creative Cloud One of the best ways to get your message across is to use a visualization to quickly draw attention to the key messages, and by presenting data visually it's also possible to uncover surprising patterns and observations that wouldn't be apparent from looking at stats alone. As author, data journalist and information designer David McCandless said in his TED talk: "By visualizing information, we turn it into a landscape that you can explore with your eyes, a sort of information map. There are many different ways of telling a story, but everything starts with an idea.

The world’s top 50 billionaires: A demographic breakdown. Top 50 Billionaire Breakdown If you asked anyone to picture the wealthiest person in the world at any given time, you could bet on some common denominators: probably a man; probably somehow attached to the words “multinational” or “conglomerate”; probably on a yacht off a private island. With Slate’s Top 50 Billionaire Breakdown, we attempt to visualize the richest of the rich by paring them into demographic categories: age, location, industry, source of wealth, education, and religious affiliation. Some of the sortings are heartening: There are more self-made men than born-rich kids in the top 50, and the self-made billionaires’ total wealth is bigger. Some are less so: The entire African continent has the same number of billionaires as Canada (one each), and there isn’t a single woman in the top 50 who’s self-made. Correction, Nov. 18, 2013: The interactive originally mislabeled the Koch brothers as Jewish.