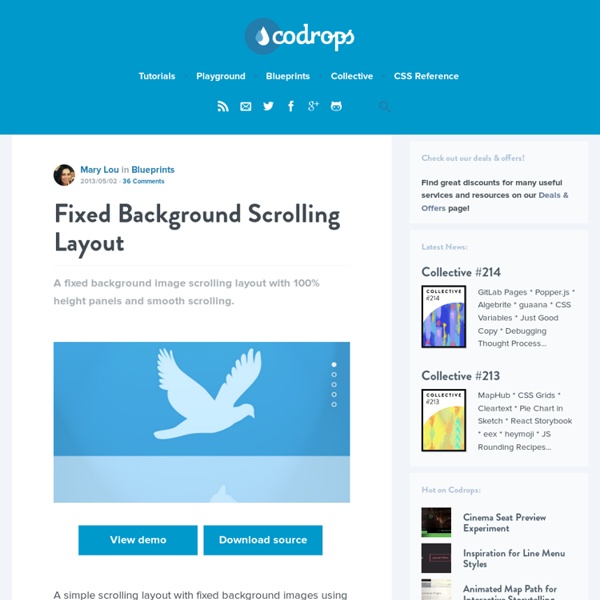 Text Opening Sequence with CSS Animations A simple and fun text opening sequence effect with blurry letters using CSS animations. View demo Download source Today I want to show you how to create a fun little typography effect with CSS animations and text shadows. Maybe you know those eerie opening sequences of movie trailers where some text is being faded in on a dark background. The idea is to blur text and make it appear with a rotation while animating the space between the letters. So, let’s do it. Please note: this is highly experimental and only works as intended in browsers that support the respective CSS properties. The idea is to have a couple of sentences fade in with the aforementioned effect, so we’ll want to wrap every appearing bit into an h2: <div class="os-phrases"><h2>Sometimes it's better</h2><h2>to hide</h2><h2>in order to</h2><h2>survive evil</h2><h2>Thanatos</h2><h2>This fall</h2><h2>Prepare</h2><h2>Refresh to replay</h2></div> This will created the following insane structure: Let’s add some space between words:

Vertical Timeline A responsive vertical timeline layout with icons and example media queries. View demo Download source This is a simple responsive timeline with alternating colors for the labels. An icon font is used for the icons in the timeline waypoints and some example media queries show how to adjust the timeline for smaller screens. The main structure of the timeline is an unordered list. The HTML <ul class="cbp_tmtimeline"><li><time class="cbp_tmtime" datetime="2013-04-10 18:30"><span>4/10/13</span><span>18:30</span></time><div class="cbp_tmicon cbp_tmicon-phone"></div><div class="cbp_tmlabel"><h2>Ricebean black-eyed pea</h2><p>Winter purslane... The CSS

ScrollMe - For simple scrolling effects Fullscreen Layout with Page Transitions A simple responsive layout with some fancy page transitions. The idea is to show four items initially and expand them. Some additional page transitions are added for inner items. View demo Download source Today we’d like to share an experimental responsive layout with you. All effects are done with CSS transitions and controled by applying classes with JavaScript. Please note: this only works as intended in browsers that support the respective CSS properties. The beautiful illustrations used in the works section of the demo are by talented Isaac Montemayor. Let’s take a look at some screenshots: The initial screen has the four flexible boxes. When clicking on a box, it get’s expanded to fullscreen. The view of a box that is expanded. In the works section, we add a thumbnail grid which will reveal a details panel once we click on an item. The navigation through the items has the same page transition. We hope you like this little experiment and find it inspiring!

Web Design Ledger - Web Design Blog Free, simple, PHP based email contact form This page presents the sample code for a simple ‘contact us’ form. The form collects a few pieces of information ( email, name and a message ) from your visitor and emails it to you. Note: You can make contact forms quickly with Simfatic Forms. Simfatic Forms helps you to make complete, feature rich forms and get it online quickly. Why to have a contact form? “Contact us” forms are essential for almost any website. The HTML contact form code We will create a simple contact form with 3 fields: name, email address and a message field. The HTML code of the form is given below: In the contact form download, the form code is in the email-contact-form.html page. Validating the form submission Form validations are essential for any web form. It is better to do validations both on the client side and on the server side. For client side validation, we will use the Free JavaScript Form Validation Script. Here is the client side form validation code: Server-side processing More Contact forms:

Creating a Border Animation Effect with SVG and CSS The website of Carl Philipe Brenner has some very creative and subtle animations and today we want to explore how to recreate a border animation effect using CSS transitions on SVG lines. View demo Download source Today we’d like to explore a very subtle, but interesting border animation effect that can be seen on the creative website of Carl Philipe Brenner. When you hover over one of the white portfolio items in the grid, you will see a subtle animation happening: the grid item becomes transparent and the border lines of each side animate clockwise, creating a really nice effect. In this case, the effect is done by animating the widths or heights of several spans with some JS. Let’s take a look at the basic concept first, and then we’ll work towards the final effect. Please note that we’ll be using CSS transitions on SVGs which might not be supported in all browsers. You can surely create this effect without SVG, even without extra elements, just using pseudo-elements. And that’s it!

The 17th Surgery Seconds later, seemingly out of nowhere, Noah was next to her. He was crying and covered in ash — but he was okay. Pete’s aunt, who’d been standing near them during the explosion, had picked him up and brought him over to Rebekah. “I thought it was a sign,” she says. ”I thought, ‘He’s here, he’s okay. And now I really am going to die.’” His aunt embraced her tightly, repeating, “Stay with me, okay? What happened next was a blur. She and Pete were in and out of surgery for the next few weeks. Pete was released from Massachusetts General Hospital after 17 days. Rebekah remained at Beth Israel Deaconess Medical Center in Boston for 39 days undergoing various reconstructive surgeries, then transferred to Houston Methodist Hospital for three weeks. “It just dragged on and on,” she says.