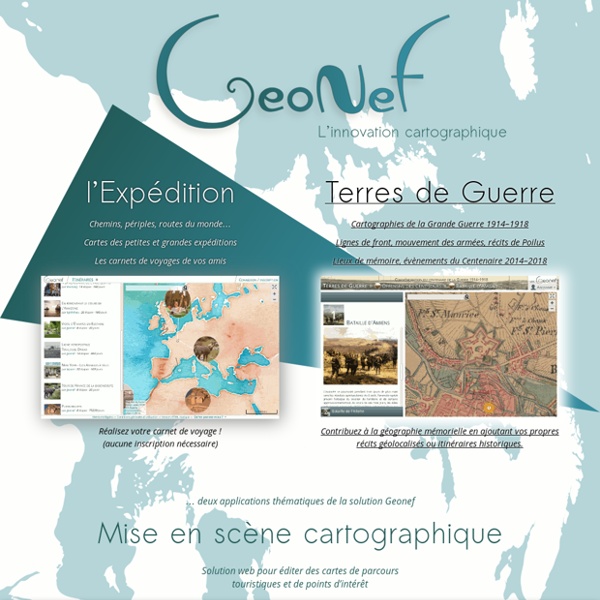 25 Free Vector World Maps Generally, finding World map templates is not an easy task. Unlike patterns and textures, high-quality world maps are not the easiest to come across. We realized this problem some time back, and here we are today, with a solution to it — an assortment of 20 world maps in various formats (PSD, SVG, and PNG).

3 Very Good Resources of Historical Maps for Teachers April 12, 2016 Yesterday we reviewed an excellent tool teachers can use to create animated multimedia scenarios on a map. Through this tool we discovered some very good resources where history teachers or anyone else interested in past cartography can access a plethora of historical maps. Some of these maps are copyright friendly and you can download and use them with your students in class. We invite you to check them out and share with us if you have other suggestions to add to this list.

How to Create a Custom Travel Map with Google Maps {New Google My Maps Tutorial} If you’ve got a vacation coming up, I have a super useful tutorial for you today to help you easily organize and manage your trip. Before I leave on a trip, I always create a custom travel map so I can keep track of my hotel, sights I want to see, photo ops, restaurants, and more all in one easily accessible spot. That way I can see where everything is, see what places are close to each other, and have directions and notes right at my fingertips. Today I’m going to show you how easy it is to make one. 5 TED-Ed Lessons about awesome women in history If it’s true that well-behaved women seldom make history, then we’d like to introduce you to a few of our favorite troublemakers. Here are 5 TED-Ed Lessons about remarkable women: 1. The pharaoh that wouldn’t be forgotten Hatshepsut was a female pharaoh during the New Kingdom in Egypt. Twenty years after her death, somebody smashed her statues, took a chisel and attempted to erase the pharaoh’s name and image from history.

Acropolis An `acropolis’ is any citadel or complex built on a high hill. The name derives from the Greek Akro, high or extreme/extremity or edge, and Polis, city, translated as 'High City’, 'City on the Edge’ or 'City in the Air’, the most famous being the Acropolis of Athens, Greece, built in the 5th century BCE. Though the word is Greek in origin, it has come to designate any such structure built on a high elevation anywhere in the world. The Castle Rock in Edinburgh, Scotland, for example, upon which looms the famous castle, was fortified as early as 850 BCE and would be known as an acropolis, as would be those cities of the Maya Civilization which fit that definition, even if they were not built on a natural elevation. Athens Acropolis

Histography- A Wonderful Interactive Timeline for History Teachers October , 2015 Histography is an excellent interactive timeline that spans the history of humankind from the Big Bang to 2015. All historical content embedded in this timeline has been drawn from wikipedia and is self-updated on a daily basis. Historical events are represented by dots and placed on a chronological order. Hovering your mouse over any dot will bring up an informational box with more details on the event. Among the things included in the description of each event are : videos (if available), a link to wiki page where you can read more on the event, and a link for related events. Courtesy of Larry Ferlazzo

Mental Canvas Player The Mental Canvas Player allows you to view and explore a drawing like you never could before. Immerse yourself in hand-drawn three-dimensional content that brings artists' sketches to life. Explore the world the artist imagined by playing an animation, or by moving around the scene and discovering compelling moments and ideas for yourself. You never know what could be waiting around a corner to surprise you. All content in the Mental Canvas Player was created exclusively using the Mental Canvas authoring system, which will be available publicly soon. Mental Canvas is a new class of graphical-media-design system that lies between today's 2D digital draw-and-paint systems and 3D computer-aided design systems, combining the ease and fluidity of sketching with expansive 3D capabilities.

NEED A HIGH RESOLUTION (300DPI) GOOGLE MAP FOR PRINTING? – Alvi Pixels Blog March 28, 2019June 14, 2019 Adding Google map to the printing material is common these days to guide your audience to your business location. The normal practice is to take a screenshot of the Google map screen and use it in the artwork. I recently used Google map in a flyer design following the above screenshot method, the print result was very poor which ruin the look of the artwork. The 72 dpi screenshot was expected to result in a poor print but it was beyond the expectations. Rebuilding Ancient Egyptian Temples in 3D The reconstructions, in this section, give an idea of how these ancient temples might have appeared to ancient eyes. Ancient peoples liked to decorate their buildings and temples with bright colours. Take the Parthenon, in Athens, for example; nowadays we have this vision of those beautiful columns and fabulously carved marbles showing the bare stone, which appeals to our modern aesthetic. However, in ancient times the bare stone was hidden from view because it was all painted in the most brilliant colours. Rebuilding Ancient Egyptian Temples in 3D The mystery of Egyptian cult temples explained, illustrated with videos, photos, drawings and 30 highly detailed computer generated reconstructions.

Resources for Primary Source Documents Primary sources are resources that were first-hand created in a given period of time and never undergone any kind of editing or distortion. These sources are multimodal and they come in different forms. They can be artifacts, documents, pictures, recordings, essays, photographs, maps...etc. Now with the globalization of knowledge and the pervasive use of digital media, primary sources become accessible to everybody with an internet connection. However, the search for these materials is akin to a scavenger hunt and hence the importance of having a handy list such as the one below to keep for rainy days. I have been scouring the web for several hours and finally come up with this selection.