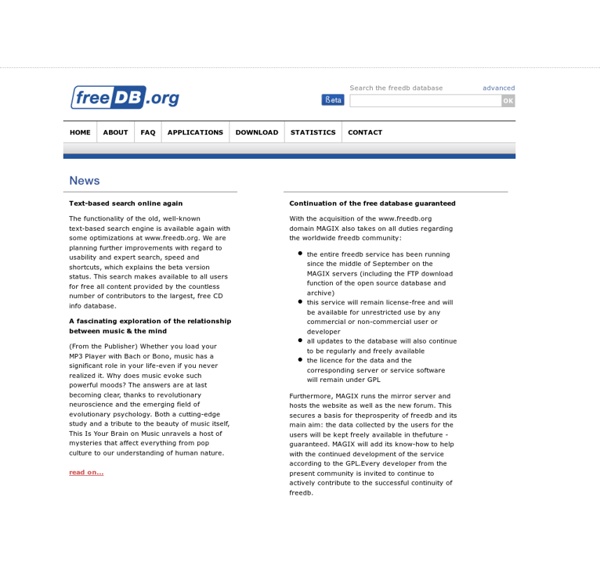 Free Software details | Cornell Electroacoustic Music Center One of the explicit goals of CEMC is to incite users to develop their own working methods and creative procedures. Part of this is accomplished through information provided in lectures and in your time engaging the software available in the studios. But as time goes by you will want to build your own software toolkit. Free software is an excellent way to do this and there are many powerful applications available. Indeed, many represent unique compositional tools unmatched in the world of commercial music software. Below is a recent compilation of recommended software for various operating systems. First, a few quick links to downloads directly pertinent to lectures: PureData installers (for pd-extended, all operating systems)JACK audio connection kit for OSX Images/office/publishing: GIMP (Photoshop replacement) -- GIMPShop (Photoshop replacement) -- Mac-specific Recommendations (often Mac version of above apps): Linux Applications:

gong discos AJAX SOUND STUDIO | PYO dedicated Python module for digital signal processing Pyo is a Python module written in C to help DSP script creation. Pyo contains classes for a wide variety of audio signal processing. GNU LGPL v3 (c) Olivier Bélanger 2020 Pyo was awarded second prize in the Lomus 2012 Free Software Competition. Installing pyo 1.0.3 Pyo is now uploaded to the Python Package index. python -m pip install pyo For more details, visit Installing pyo with pip. Older releases of pyo (prior to 1.0.0) are available here. The GIT repository at is used to keep track of the source code and for bug reports. Online documentation Complete documentation of pyo 1.0.3 classes can be found here. You can subscribe to the pyo-discuss mailing list here. Here is an update of the slides (also in french) about the integration of pyo on the Bela platform. Pyo Feature Market You want to help the development of pyo ? Go to the pyo features market and make a donation for the feature you want to promote.