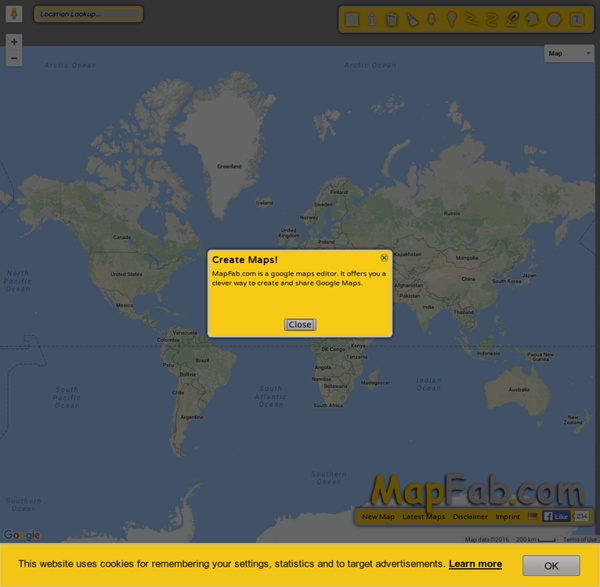 MapFab.com is a google maps editor. It offers you a clever way to create and share Google Maps. Your map was successfully stored on the server. Height px Width px Show map information Conditions The use of the embedded map is for free, but you must agree to following conditions. You are not allowed to modify the generated embedded code (this includes the link beneath the embedded map). The embedded map can be removed or disabled at any time, without mentioning a reason.

Mac and More: Tableau Public 8.2 Launches Today we're pleased to announce that the newest version of Tableau Public, version 8.2, is available on Windows and Mac! Tableau Public is the free version of our revolutionary software that we make available to anyone wanting to tell engaging stories with public data on the web. A free 14-day trial of Tableau Desktop 8.2 is also available.

Social Studies Projects & Ideas for PBL History, Geography & Civics These 350 social studies projects take your students beyond dioramas and research papers to authentic learning, through community and civic problem-solving and outreach. Students collaborate with classes across campus, town, or the world to develop solutions, share international cultures, and understand local, state, national, and world issues. I got my start on social studies projects with an ePals project. My class paired up with a class in Germany to learn about the culture and geography of Germany and Europe. The structure of the ePals project helped me to organize my lessons and helped my students to present what they learned to other second grade classes. I hope you find these project ideas helpful for your next (or first) project!

Using Dynamic Non-Spatial Data In GeoCommons In my previous post, I described how I used a Python script to scrape power outage information from a local web site and convert it into an RSS feed. In this post, I’ll show how I used GeoCommons to visualize the changing information over time. The process starts by creating a data set in GeoCommmons based on a URL link to the feed created in the previous post. The general process for doing that can be found here in the GeoCommons documentation. My feed is not a GeoRSS feed so it has no location data of its own for GeoCommons to work with. During the upload process, I reached this screen, which starts the process of helping to attach location to my data. Map 1500988 Map 1500988 San Francisco, CA Advertisements Categorized Markers view locations on separate page Build This Map

Super Teacher Tools Speed Match Our Speed Match Review Game tool is the newest review game to be added to the site. Players must drag and drop answers onto the correct question to clear the board. 20 Good Map Creation Tools for Students A couple of years ago I published a list of 21 online map creation tools. Since then some of those tools have gone offline and new tools have replaced them. Here's my updated list of online map creation tools for students and teachers. Wikia Maps is a map creation tool from Wikia. Wikia Maps has two map creation options. You can use Wikia Maps to create maps in a manner similar to those that you may have previously created in Google Maps.

Global Competency Students can: Generate and explain the significance of locally, regionally or globally focused researchable questions. Identify, collect and analyze the knowledge and evidence required to answer questions using a variety of international sources, media and languages. Weigh, integrate and synthesize evidence collected to construct coherent responses that is appropriate to the context of issues or problems. Develop an argument based on compelling evidence that considers multiple perspectives and draws defensible conclusions.

Monasterium.net Welcome to the collaborative archive of Monasterium.Net! In our virtual archive, you can access a content of more than 500,000 primary sources from more than 100 European archives. The documents are organized in archival fonds and research collections. 20 Good Map Creation Tools for Students A couple of years ago I published a list of 21 online map creation tools. Since then some of those tools have gone offline and new tools have replaced them. Here's my updated list of online map creation tools for students and teachers. Wikia Maps is a map creation tool from Wikia.

Global SchoolNet: Programs Announcements Donate Now Global Forest Link Share Your Silence John Cage’s 4'33" is a composition four minutes and thirty-three seconds in length, during which the performer—or performers—does not play a note. Often described as Cage’s "silent" piece, 4'33" was in fact meant to shift attention away from the performer, to the audience itself, and to the richness and variety of ambient sound. Reflecting years later on the 1952 debut performance, Cage wrote: "What they thought was silence, because they didn’t know how to listen, was full of accidental sounds." Use your mobile device to record the "silence" around you. Visit this web site to submit your recordings to MoMA's SoundCloud dropbox. Indicate where you recorded it in the description field.