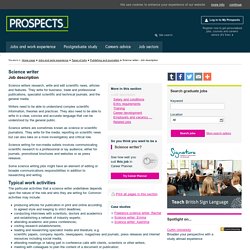 They write for business, trade and professional publications, specialist scientific and technical journals, and the general media. Writers need to be able to understand complex scientific information, theories and practices. They also need to be able to write in a clear, concise and accurate language that can be understood by the general public. Science writers are sometimes known as science or scientific journalists. They write for the media, reporting on scientific news but can also take on a more investigatory and critical role. Science writing for non-media outlets involves communicating scientific research to a professional or lay audience, either for journals, promotional brochures and websites or as press releases. Association of British Science Writers (ABSW) Home. For *some* of your science communication jobs needs ;)

Getting into….Science Communication. CC-BY mikael altemark on FlickrAre you passionate about science but not keen on a career ‘at the bench’? 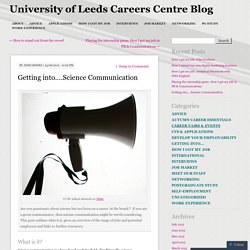 If you are a great communicator, then science communication might be worth considering. This post outlines what it is, gives an overview of the range of jobs and potential employers and links to further resources. What is it? Science communication is a broad and evolving field. Traditionally, science communication was the realm of scientists themselves or specialised science journalists (i.e. reporting on scientific developments for media outlets). Essentially it concerns communicating scientific developments and activity to the wider public, and/or enthusing others about the value of science. What and where are the jobs? As the sector grows, so the range of jobs is diversifying, now encompassing a broad range of potential activities. Jobs can be found with potentially any organisation which is involved in, or concerned with, science. What qualifications do I need? Further resources. 030020041. JA V14 I2 Whelan1. SYWTBASW. Careers In Science and Medical Writing.

If you can't explain it to a six year old, you don't understand it yourself. 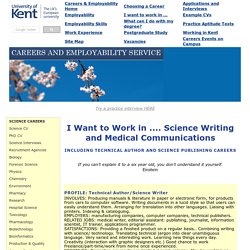 Einstein Skills Required Medical Writers These have to write protocols, clinical trials reports, and patient information for the pharmaceutical industry regulatory authorities. They also have to write, design and develop marketing literature for medical sales representatives, posters and presentations for conferences.

Research and development. Medical writing offers plenty of scope to do work you feel is worthwhile and suited to your character and talents. 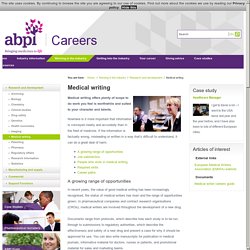 Nowhere is it more important that information is conveyed clearly and accurately than in the field of medicine. If the information is factually wrong, misleading or written in a way that's difficult to understand, it can do a great deal of harm. A growing range of opportunities In recent years, the value of good medical writing has been increasingly recognised, the status of medical writers has risen and the range of opportunities grown.

Secrets of good science writing. ISTC - The Institute of Scientific and Technical Communicators. ScienceWriters (www.NASW.org) Female science writers celebrated. A Royal Society discussion has considered the behind-the-scenes and often neglected roles that women have long played in the advancement of science. 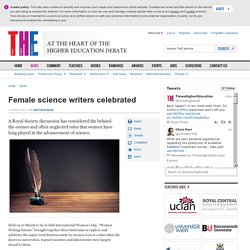 Held on 10 March to tie in with International Women’s Day, “Women Writing Science” brought together three historians to explore and celebrate the major contributions made by women even at a time when the doors to universities, learned societies and laboratories were largely closed to them. Patricia Fara, senior tutor in the philosophy of science at the University of Cambridge, considered their crucial place in communicating and translating science.

Michael Faraday was “an example of a major scientist brought into science by a woman”, since he always stressed the life-changing impact on him of Jane Marcet’s 1805 book, Conversations on Chemistry, Intended More Especially for the Female Sex. Isaac Newton was such a dull speaker he always ended up “lectur[ing] to the walls” and greatly needed others to popularise his ideas. Science communication in the United Kingdom. Welcome to this learning resource on UK Science Communication. 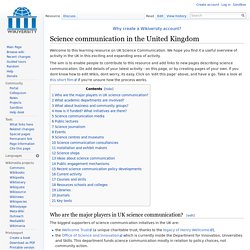 We hope you find it a useful overview of activity in the UK in this exciting and expanding area of activity. The aim is to enable people to contribute to this resource and add links to new pages describing science communication. Do add details of your latest activity - on this page, or by creating pages of your own. If you dont know how to edit Wikis, dont worry, its easy.

Click on 'edit this page' above, and have a go. Who are the major players in UK science communication? The biggest supporters of science communication initatives in the UK are: the Wellcome Trust (a unique charitable trust, thanks to the legacy of Henry Wellcome),the Office of Science and Innovation which is currently inside the Department for Innovation, Universities and Skills. Bursary memorial for Ivan Noble. A bursary for journalists to work on the BBC News website is to honour Ivan Noble, the science and technology reporter who died of a brain tumour. 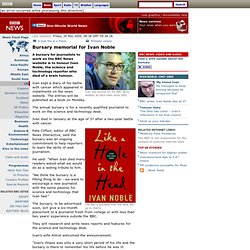 Ivan kept a diary of his battle with cancer which appeared in instalments on the news website. The entries will be published as a book on Monday. The annual bursary is for a recently qualified journalist to work on the science and technology desk. Ivan died in January at the age of 37 after a two-year battle with cancer. Pete Clifton, editor of BBC News Interactive, said the bursary was an ongoing commitment to help reporters to learn the skills of web journalism. He said: "When Ivan died many readers asked what we would do as a lasting tribute to him.