Video Game Jobs - Learn About Video Game Jobs. Software for creating video game (RPG maker, Mugen, etc.). WRITING A VIDEO GAME SCRIPT - WRITE THE GAME by Keira Peney. Home of ISOTX – Video Game Development and Game Design. Become a Computer Game Developer: Writing your first game. VRIC20029.pdf. VRIC20029. How to write a video game script. Writing a script for a video game There are two components to writing a script for a video game.There is a Flowchart that lays out the decision making of the game and shows the various logical paths the user can take and there is the prose script that describes what happens. 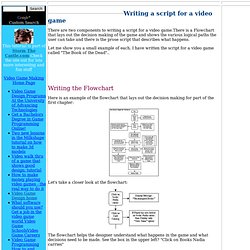 Let me show you a small example of each. I have written the script for a video game called "The Book of the Dead".. Writing the Flowchart. How to Make a Video Game for free. Everything you need to make a video game at no cost is readily available. 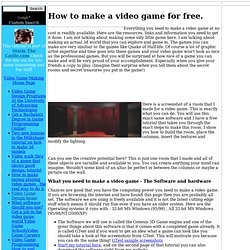 Here are the resources, links and information you need to get it done. I am not talking about making some silly little game here. I am talking about making an actual 3d world that you can explore and game in. The games you can make are very similiar to the games like Quake of Half-life. Of course a lot of graphic artist expertise and time goes into these games and your video game won't look as nice as the professional games.