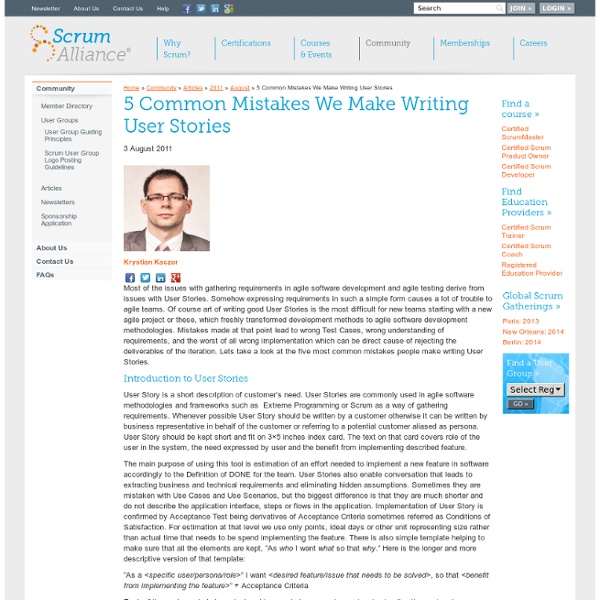 Most of the issues with gathering requirements in agile software development and agile testing derive from issues with User Stories. Somehow expressing requirements in such a simple form causes a lot of trouble to agile teams. Of course art of writing good User Stories is the most difficult for new teams starting with a new agile project or these, which freshly transformed development methods to agile software development methodologies. Mistakes made at that point lead to wrong Test Cases, wrong understanding of requirements, and the worst of all wrong implementation which can be direct cause of rejecting the deliverables of the iteration. Introduction to User Stories User Story is a short description of customer’s need. The main purpose of using this tool is estimation of an effort needed to implement a new feature in software accordingly to the Definition of DONE for the team. Each of these elements is important and has a role in expressing and understanding the captured requirement. Related:  Agile

Agile Story Card Templates - SolutionsIQ Help Drive Consistency Simplicity – maximizing the amount of work not done – is an essential aspect of achieving organizational agility, and also happens to be one of the twelve Agile Principles behind the Agile Manifesto. A quick way to make your team’s space a little more simple is by having consistent looking Story Cards up on the wall. Why waste time trying to remember the story’s name – always have it in the same place. What do they look like? What’s the best way to use the cards? Here are the primary guidelines: Story NameStory TypeStory SizeAcceptance Criteria (on back)Comments You can also easily track: PriorityKano AnalysisDependenciesTargeted ReleaseIteration CommittedDay Started & Day Finished Why is the back upside down? It may seem a little odd, but we’re Agile Practitioners and do this stuff every day and trust us – it can get annoying to always have to take a card off the wall to read your Acceptance Criteria. Here are a few other ways to use the SolutionsIQ Story Card Template.

Agile Software Development In 5 Minutes | Stephen Haunts { Coding in the Trenches } Recently, I have been doing lots of recruitment for .NET consultants. Each of the CV’s we receive all stress that they are experienced in working in agile development shops. This is great. We are an agile development company so these people sounds like a great fit. Agile Software Development – Embracing Change So we get them into an interview and ask them, ‘What does agile mean?’ We do Test Driven Development.Daily stand-ups.We pair program.We use continuous integration.We use SCRUM, KanBan, XP etc.Use work in iterations.We use story points.We calculate team velocities. These answers are all well and good, but they don’t describe what an agile team is. To describe what agile is all about, you can sum is all down to the following, (quoted from the agile manifesto website). Manifesto for Agile Software Development We are uncovering better ways of developing software by doing it and helping others do it. Agile Manifesto is all about team work and collaboration. Like this: Like Loading... Related

Scrum Role Playing Scrum is very explicit in its clarification of roles and responsibilities. Scrum has only three roles; together they cover the responsibilities needed to ensure a successful project. The Product Owner represents the customer and sets the vision, goals and priorities of the project. Almost anyone who has been on a Scrum project has noticed the issues that can arise when one Scrum team member wears two hats (for instance, when one person plays both the role of ScrumMaster and the role of developer or when one person plays Product Owner and developer). Another less-than-ideal scenario is having one person play the roles of ScrumMaster and Product Owner. While none of the problems in the above scenarios is insurmountable, arguably the most anxiety-inducing and uncommon dual-role is the combination of ScrumMaster and Product Owner. The developers were happy for Ben to take on the role (perhaps because none were too keen on being ScrumMaster themselves!)

Overview - Large Scale Scrum (LeSS) code2plan – Free Agile project management for the single developer or dev team code2plan This is a pretty cool looking project written in .Net 3.51, WPF and LINQ to SQL. While the source is not available, the basic edition will be free for forever. If you’re looking for a simple project management tool for your project and/or team, are doing agile based dev (XP, Scrum, etc), then this might be something to check out. Since it’s in beta I’m sure the team (two coding till their fingers bleed guys) will be very open to your comments and suggestions… Thanks for the Jesse for the heads up Nexus Framework What is Nexus? Nexus is a framework that drives to the heart of scaling: cross-team dependencies and integration issues. It is an exoskeleton that rests on top of multiple Scrum Teams who work together to create an Integrated Increment. The result can be an effective development group of up to 100 people. How Do I Implement Nexus? You will need several techniques to bind the work of the Scrum Teams in your Nexus. We have developed or reformulated over 50 practices to help you launch and sustain a Nexus predictably.

Stand Up Meetings - Learning from Scrum & Agile Project Management Stand up meetings - also called Scrum meetings - are an important factor of Scrum project management. Scrum is a form of agile project management that breaks projects down into smaller, easier to manage chunks that are completed as sprints. Daily Scrum meetings are important as the method is so changeable. They ensure that everybody is on track and minimise the chances of two team members performing the same task. However, because they are daily they must be kept short and so Scrum meetings are usually stand up meetings. Learn more about Scrum and become accredited with Scrum Training. The Scrum process is explained in the graphic below: For more information on Agile and Scrum read What Is Agile Project Management? Why Stand Up? We have already established that stand up meetings are an important part of Scrum as they help keep project on track. The logic behind stand up meetings is that it is uncomfortable to stand for long periods. 3 Tips for Successful Stand Up Meetings 1. 2. 3. Scepticism

Winston W. Royce From a talk Royce gave on August 10, 1990 Winston Walker Royce (August 15, 1929 – June 7, 1995) was an American computer scientist, director at Lockheed Software Technology Center in Austin, Texas. He was a pioneer in the field of software development,[1] known for his 1970 paper from which the Waterfall model for software development was mistakenly[2] drawn.[3] Biography[edit] Born in 1929, Royce entered the California Institute of Technology, where he received his BS in physics, his MS in aeronautical engineering and in 1959 his PhD in aeronautical engineering under Julian David Cole[4] with the thesis Transonic flow over a non-lifting, slender body of revolution. Royce had begun his career as Assistant Professor at the California Institute of Technology. Work[edit] Managing the development of large software systems[edit] The Waterfall model for software development is mistakenly attributed to Royce. The unmodified waterfall model. Software system engineering[edit] According to Richard H.

How to Create Sticky Notes in PowerPoint 2010 A sticky note was originally designed by 3M and is also known as Post It. It is a small piece of paper stationery with a re-adherable strip of adhesive on the back. Post its were designed for temporarily attaching notes to documents and other surfaces. In PowerPoint we can easily create post it by using PowerPoint shapes. As we will see below, we will be able to insert as many post it or sticky notes we want into the PowerPoint presentation slide. This can be strongly helpful for agile product development, project planning tasks, as well as other presentation needs. The example above shows a custom white post it design but it is important to notice that the original color is a canary yellow in a squared piece of paper. To insert a post it in PowerPoint 2010 go to Insert menu and then choose Shapes. Insert this shape into the slide and now we are ready to customize the post it style. Post It PowerPoint Template (177 downloads) share

FBI's Sentinel Project: 5 Lessons Learned Agency used agile development and private sector know-how to finish its long-delayed digital case management system. American Red Cross Social Media Command Center (click image for larger view and for slideshow) After six years of development, the FBI says its next-gen digital case management system, Sentinel, is finally up and running. Sentinel had been a case study in federal IT projects gone awry--missed deadlines, budget overruns, feature shortcomings, and a benchmark test last October that pooped out. Keep in mind that Sentinel has roots in an earlier IT project failure, the so-called Virtual Case File system. Whether the system will work as advertised and be accepted by the agency's rank and file remains to be seen. 1. 2. 3. 4. 5. Johnson offered the first public demonstration of Sentinel this week at FBI headquarters. Fulgham wasn't around to participate in the unveiling. The Office of Management and Budget demands that federal agencies tap into a more efficient IT delivery model.

Why Kafka needs to be one of your scrum team members | pmScrum The agile world and Scrum are promoting the fact to make everything on project clear & visible. Hence that is why the taskboards, post-it, red impediment stickers were invented. And they do their job very well. However in our project a lot of other things emerged that required visibility to the project team and it’s stakeholders. This is how our wall is looking right now (11/10/2010)You immediately see that we don’t have a normal task-board anymore. We did in the beginning but soon realized that the project was too big to manage it on task level during the stand-ups. Our storyboard shows on the left hand all the application teams that work on the project and then from left to right you have to normal ‘not started’, ‘ongoing’, ‘done’ columns in which we follow-up the stories on which a specific application team is working. For the biggest application team (which takes up about 50% of all development work - +/-2000 md) we created a separate storyboard, combined with some KanBan principles.