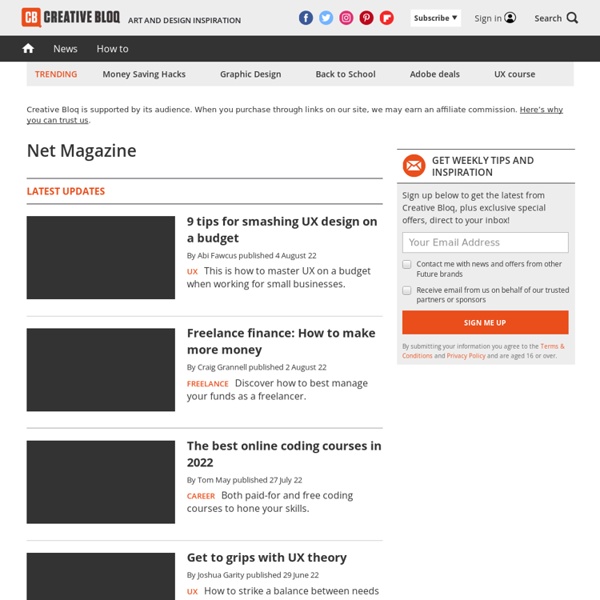 net magazine is the number one choice for the professional web designer and developer. It's here that you find out about the latest new web trends, technologies and techniques – all in one handy package. Each issue boasts a wealth of expert tips and advice, including in-depth features and over 30 pages of advanced front and backend tutorials on subjects as diverse as CSS, HTML, JavaScript, WordPress, PHP, and plenty more. net compiles the hottest new sites from around the web, and being the voice of web design, our mission is to source the best articles written by the best people in the industry and feature interviews and opinions crammed with inspiration and creative advice. In short, If you're serious about web design and development, then net is the magazine for you. Editorial Oliver Lindberg, editor, oliver.lindberg@futurenet.com Ruth Hamilton, production editor, ruth.hamilton@futurenet.com Rebecca Shaw, art editor, rebecca.shaw@futurenet.com Advertising

What Can You Do With Paper.js? There are many JavaScript frameworks that leverage HTML5. Paper.js is one of these frameworks that uses Document Object Model (DOM) to structure objects in an easy-to-understand manner. It offers creative and neat ways of doing lots of stuff on a Web browser that supports the <canvas> tag. It also offers a new and interesting approach to drawing vector graphics. The basic setup is shown below: As you can see, the paper.js is included after which you add your code file under “type=”text/….”

Free CAD Files of 241 Major World Cities Free CAD Files of 241 Major World Cities Creating designs for cities all over the planet may have just gotten a whole lot easier - thanks to Brandon Liu, a Software Developer from San Francisco who used data from OpenStreetMap to create .DXF CAD files of 241 major cities worldwide. These files are entirely free to download, and from San Francisco to Sydney, Buenos Aires to Beijing and Helsinki to Harare, most of the world's major cities are included.

Windows Desktop UI Concept Posted by Sputnik8 on February 24, 2012 10:24 pm This is a desktop concept that I’ve recently put together for fun. I thought I’d post a few screens to see what people here think. The screens include variations of explorer, ie (with a quick redesign of windows.com and bing), media center/player, and skype. The Cityscape Project "The Cityscape" or "Virtual Reality for the New New Economy" Begin illustrated tutorial: What Is It? --> As seen in Wired Magazine, The New York Times, Dwell Magazine, Slashdot, and NBC11's Tech Now. How do I contact the idiot that made this? © 2002 Ryan Hoagland

Requirements Envisioning: An Agile Best Practice 1. When Should You Do Initial Agile Requirements Modeling? Agile Model Driven Development (AMDD), see Figure 1, explicitly includes an initial requirements envisioning effort during Iteration 0 of an agile project (what some processes might call the Warm-UP, Inception phase, or Initiation phase). Initial requirements envisioning is particularly important for scaling agile software development techniques to larger, more complex, or globally distributed development (GDD) efforts. The goal is to understand the requirements at a high-level, it isn't to create a detailed requirements specification early in the lifecycle, a traditional practice referred to as "Big Requirements Up Front" (BRUF) which proves to be very risky in practice (traditional theory is that BRUF is a best practice, but experience shows otherwise). Figure 1.

Dragan's Blog  Aka canvas / SVG paradox. This year it will be full 10 years that I officially work for various companies, and i could add 3-4 years of freelancing / solo experimenting to that. Most of that time i spent drawing various data in browser. playLAND / LIKEarchitects Architects: LIKEarchitects Location: 4940 Paredes de Coura, Portugal Architect In Charge: Diogo Aguiar, João Jesus, Teresa Otto and João Salgueiro, Daniel Mudrak Year: 2014 Photographs: Dinis Sottomayor photography Main Materials: Beach floats Client: O Mundo ao Contrário | Paredes de Coura City Hall From the architect. playLAND is a set of three bouncy and colorful spatial interventions geared for children in the public space of Paredes de Coura, that built a human scale Lego using beach buoys as module. Removed from the usual water context and used in three colors – green, orange and pink – the beach floats serve as the modular construction element, allowing the creation of a light and colorful world, built with recognizable objects belonging from another place.

Google Maps: Designing the Modern Atlas It is often the case in interaction design that the best solutions simply get out of the way, allowing the user to achieve their goal and get on with their life. With Google Maps, this is certainly the desired outcome. Geographic navigation and search should be smooth, efficient, and ultimately straightforward. When this is successful and the product works as it should, the nuances and details behind these experiences can often go unnoticed, written off as algorithmically derived and invisible. Since its launch in 2004, Google Maps has come a long way from its relatively simple beginnings as a simple pannable and zoomable road map of the United States and United Kingdom.

50 free web design tools that rock! This article first appeared in issue 219 of .net magazine – the world's best-selling magazine for web designers and developers. With web design encompassing all kinds of disciplines from code editing to photo manipulation, building up a set of tools to cover every eventuality can quickly become a very expensive exercise. However, spending huge sums on big-name packages isn’t the only option: it’s possible to pick up everything from image editors to integrated development environments and entire content management systems that won’t cost you a single penny. 10 ways to encourage customer reviews online Customer reviews are a hugely important in ecommerce for improving your conversion rate, and can lead to an uplift of 18% in sales. Research has shown that 61% of customers read online reviews before making a purchase decision and 63% of customers are more likely to make a purchase from a site that has user reviews. Annoyingly though, customers generally can’t be bothered to leave their feedback. As such you need to find ways of encouraging your customers to leave their feedback without coming across as desperate. It’s a topic we’ve previously touched on in posts looking at how to organise ecommerce product reviews and how to optimise reviews for higher conversion rates. And here are 10 tips to help you drive up the number of reviews on your site...

HTML5 Game: Air Raid Defender – Gary Smith Welcome to my second attempt at an HTML5 game: Air Raid Defender! This game was coded in HTML5 Canvas and JavaScript with the Paper.js library. I’ve only used a few of the library’s many features (and pretty much ignored its focus on vector-based graphics in favour of bitmaps) but I found the library vastly simplified basic tasks such as placing image objects on the screen, rotating them, and refreshing and redrawing the canvas with every frame. In this respect it feels like progress over my more rudimentary first HTML5 game. The gameplay itself is straightforward: use the mouse to aim the anti-aircraft gun, and click to shoot. It takes three hits to bring down a plane.

Crossword Puzzle Maker Instructions: Complete the crossword below We have premade word/clue sets. Or use our Copy-n-Paste Quick Add Feature *NEW* Word List Saving Options Save your entered words for our other puzzle makers! Revolutionary User Interfaces A few years ago, around the middle of the last decade, the mobile phone market was characterized by the rivalry between a few established vendors. These were Nokia, Samsung, LG, Motorola and Sony Ericsson. These incumbent companies had a broad portfolio of devices including smartphones and feature phones and basic phones. The Web Design and Development Blog - StumbleUpon DesignWoop welcomes this guest post by Tomas Laurinavicius. Since the iPhone and iPad entered the market you can hear lots of news about apps for these devices. Tons of apps available today and you can find everything you want. But today I would like to share 10 handy web-based apps for designers. To use these apps you don’t need to buy an iPhone or iPad, you can use them without any additional software or device, you just need a web browser. In this collection I’ve picked 10 useful and time-saving web apps for designers.