Discussions about Energy and Our Future 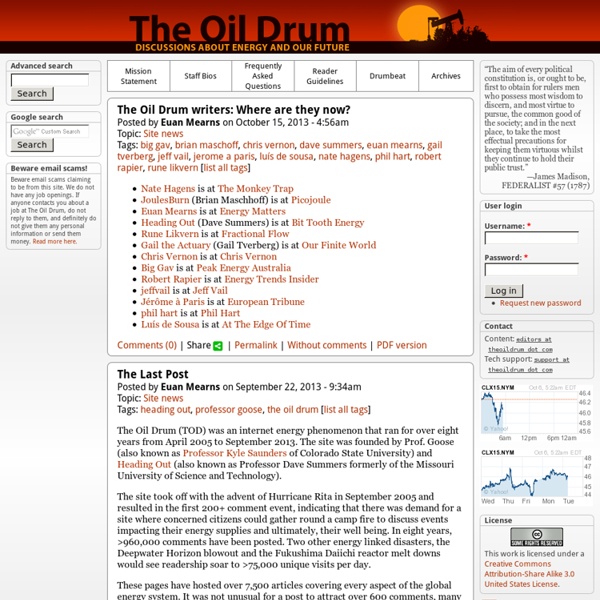 The Oil Drum (TOD) was an internet energy phenomenon that ran for over eight years from April 2005 to September 2013. The site was founded by Prof. Goose (also known as Professor Kyle Saunders of Colorado State University) and Heading Out (also known as Professor Dave Summers formerly of the Missouri University of Science and Technology). The site took off with the advent of Hurricane Rita in September 2005 and resulted in the first 200+ comment event, indicating that there was demand for a site where concerned citizens could gather round a camp fire to discuss events impacting their energy supplies and ultimately, their well being. In eight years, >960,000 comments have been posted. Two other energy linked disasters, the Deepwater Horizon blowout and the Fukushima Daiichi reactor melt downs would see readership soar to >75,000 unique visits per day.

Nottingham Description TSB Integrated Smart Meters Srping 2011: This site demonstrates a Moixa Smart DC system installation in the David Wilson Eco-House. The Eco-house is part of a trial site of 7 houses built on a green close within the University of Nottinham, to evaluate and test renewable energy solutions as part of the Department of Architecture & Built Environment.

IEA acknowledges peak oil If you go to the executive summary of the 2009 International Energy Agency World Energy Outlook, and search for "peak oil", your browser will come up empty. The whole subject was so beneath the dignity of a serious energy agency that they didn't even bother mentioning it. However, yesterday, the 2010 IEA World Energy Outlook became available. And if you repeat the exercise in that executive summary, you will come upon a section titled: As Food Stamp Recipients Hit New Record, 400 Americans Account For 10% Of Capital Gains Today SNAP released the most recent food stamp numbers. Not surprisingly, we just saw another all time high 44.2 million poverty-level Americans relying on government funding for day to day sustenance. Granted the number appears to be plateauing, so all those who bought the change if not the ho[y]pe, can rejoice as it may start declining next month: a development that is sure to be herald for Obama a 4th Putin-esque term. That said, another number that has to be kept in perspective and for which we have to thank none other than Pauly-K is that offsetting these 44.2 million of impoverished Americans who can get a tax refund for writing off the American dream, are 400 Americans who accounted for 10%, or $91 billion of total, in capital gains taxes, or said otherwise, 400 US taxpayers account for 10% of all capital gains in 2007!

ACEEE Blog Late on Friday, the Department of Energy (DOE) proposed new efficiency standards for commercial icemakers, which make the ice provided by drink dispensers in fast food restaurants among many other uses. While the proposed standards would be a significant step toward improving icemaker efficiency, higher cost-effective efficiency levels could be achieved using commercially available technologies. At a fast food restaurant, icemakers typically sit on top of the fountain drink dispensers. Commercial icemakers are also used in places like hotels, hospitals, and convenience stores. DOE estimates that icemakers meeting the proposed standards sold over thirty years would reduce U.S. electricity consumption by about 30 billion kilowatt-hours, which is equivalent to the annual electricity use of three million U.S. homes, and save businesses $1.8 billion.

Can Crowdfunding Unlock an Off-Grid Solar Revolution? The poorest people on the planet spend more on energy than we do. Surprised? I live in a two-bedroom apartment in Brooklyn and calculated that my roommate and I spend about $850 annually on electricity and gas. This represents 0.5 percent of our combined annual income (before I joined the startup world, that is). The century of old age - macrobusiness.com.au As mentioned previously, the 21st century will be the century of old age, where declining birth rates meet longer life expectancies. This ageing of the population will affect many areas of the international economy, from consumption and growth to asset valuations. The impacts from ageing will likely be most acute in Western Nations, although some developing countries, most notably China, will also be negatively affected.

How to Contribute - Networked Researcher Networked Researcher is a UK-based academic publishing and networking platform with an international outlook. Here we explain how to join us as a contributor to our blog. The very nature of social media means that this project will grow through user interaction. WEBINAR RECORDING: Community Solar 101 Energy | Mar 5, 2013 In January 2013 New Dream hosted a webinar about how everyday people can work with neighbors to bring solar energy to their community. Topics included solar cooperatives, bulk purchasing, group net metering, and more. The End of Cheap Oil, by Colin J. Campbell, Jean Laherrere Why is the global economy constrained by the energy cost of energy? In 1973 and 1979 a pair of sudden price increases rudely awakened the industrial world to its dependence on cheap crude oil. Prices first tripled in response to an Arab embargo and then nearly doubled again when Iran dethroned its Shah, sending the major economies sputtering into recession. Many analysts warned that these crises proved that the world would soon run out of oil.

America’s Middle Class Crisis: The Sobering Facts Two recessions, a couple of market crashes, and stubbornly high unemployment are all wreaking havoc on America's middle class. In the accompanying interview, The Daily Ticker's Aaron Task discusses the state of the middle class with Sherle Schwenninger, director of economic growth and American strategy programs at the New America Foundation. Schwenninger's recent report "The American Middle Class Under Stress" has some stunning facts that highlight the struggles the average American is having getting a decent-paying job and keeping up with rising cost of living.