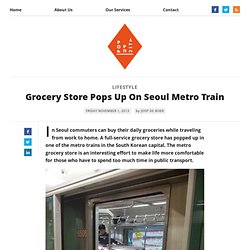 A full-service grocery store has popped up in one of the metro trains in the South Korean capital. The metro grocery store is an interesting effort to make life more comfortable for those who have to spend too much time in public transport. Some years ago the Dutch design office NL Architects launched a plan to transform a train cabin in the Netherlands into an Albert Heijn grocery store. Unfortunately, their idea to make shopping mobile and offer commuters the option to buy their daily needs on the go has never been brought into reality as it has never been taken seriously by the conservative Dutch Railways. 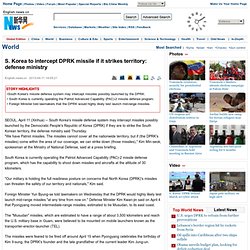 "We have Patriot missiles. The missiles cannot cover all the nationwide territory, but if (the DPRK's missiles) come within the area of our coverage, we can strike down (those missiles)," Kim Min-seok, spokesman at the Ministry of National Defense, said at a press briefing. South Korea’s Nuclear Defense. In a few weeks, South Korea’s newly-elected President, Park Geun-hye, will arrive in the United States on her first state visit. 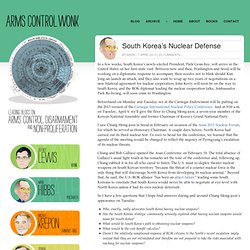 Between now and then, Washington and Seoul will be working on a diplomatic response to accompany their resolve not to blink should Kim Jong-un launch an attack, and they also want to wrap up two years of negotiations on a new bilateral agreement for nuclear cooperation. John Kerry will soon be on the way to South Korea, and the ROK diplomat leading the nuclear cooperation talks, Ambassador Park Ro-byung, will soon come to Washington. Beforehand–on Monday and Tuesday–we at the Carnegie Endowment will be putting on the 2013 version of the Carnegie International Nuclear Policy Conference. And at 9:00 a.m. on Tuesday, April 9, we’ll give the floor to Chung Mong-joon, a seven-year member of the Korean National Assembly and former Chairman of Korea’s Grand National Party. Chung and Bob Gallucci opened the Asan Conference on February 19.

South Korea Adjusts Military Posture After Ship Attack. PrintShareEmailTwitterFacebookLinkedIn Nearly one year after a submarine-launched torpedo was blamed for sinking a South Korean warship, killing scores of sailors, Seoul has adopted a more forceful military posture in the face of potential new attacks from the North, the Korea Herald reported on Saturday (see GSN, March 18). 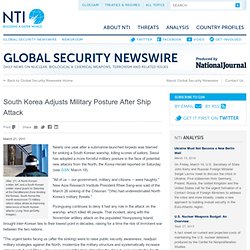 "All of us -- our government, military and citizens -- were haughty," New Asia Research Institute President Rhee Sang-woo said of the March 26 sinking of the Cheonan. Korean deploys Aegis ships to track rocket launch. S. 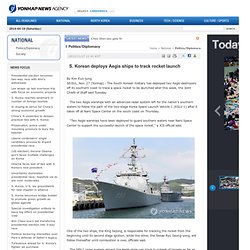 Korean deploys Aegis ships to track rocket launch By Kim Eun-jung SEOUL, Nov. 27 (Yonhap) - The South Korean military has deployed two Aegis destroyers off its southern coast to trace a space rocket to be launched later this week, the Joint Chiefs of Staff said Tuesday. The nuclear information project: US Nuclear Weapons in Korea. On September 19, 2005, the Bush administration affirmed in a Joint Statement of the Fourth Round of the Six-Party Talks that "it has no nuclear weapons on the Korean Peninsula and has no intention to attack... 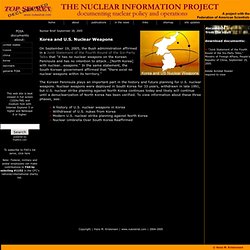 [North Korea] with nuclear...weapons. " In the same statement, the South Korean government affirmed that "there exist no nuclear weapons within its territory. " The Korean Peninsula plays an important part in the history and future planning for U.S. nuclear weapons. Nuclear weapons were deployed in South Korea for 33 years, withdrawn in late 1991, but U.S. nuclear strike planning against North Korea continues today and likely will continue until a denuclearization of North Korea has been verified. 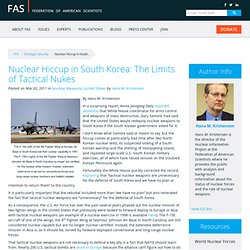 Kristensen In a surprising report, Korea Joongang Daily reported yesterday that White House coordinator for arms control and weapons of mass destruction, Gary Samore, had said that the United States would redeploy nuclear weapons to South Korea if the South Korean government asked for it. I don’t know what Samore said or meant to say, but the hiccup comes at particularly bad time after two North Korean nuclear tests, its suspected sinking of a South Korean warship and the shelling of Yeonpyeong island, and repeated large-scale U.S. -South Korean military exercises, all of which have raised tension on the troubled Korean Peninsula again. Fortunately the White House quickly corrected the record, explaning that “tactical nuclear weapons are unnecessary for the defense of South Korea and we have no plan or intention to return them” to the country. As a consequence, the U.S. That tactical nuclear weapons are not necessary to defend a key ally is a fact that NATO should learn from.