Phytotherapy. Herbalism ("Herbology" or "Herbal Medicine") is use of plants for medicinal purposes, and the study of such use. 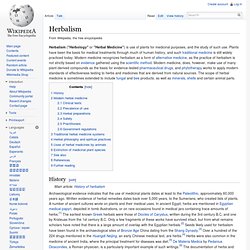 Plants have been the basis for medical treatments through much of human history, and such traditional medicine is still widely practiced today. Modern medicine recognizes herbalism as a form of alternative medicine, as the practice of herbalism is not strictly based on evidence gathered using the scientific method. Modern medicine, does, however, make use of many plant-derived compounds as the basis for evidence-tested pharmaceutical drugs, and phytotherapy works to apply modern standards of effectiveness testing to herbs and medicines that are derived from natural sources. The scope of herbal medicine is sometimes extended to include fungal and bee products, as well as minerals, shells and certain animal parts. History[edit] Archaeological evidence indicates that the use of medicinal plants dates at least to the Paleolithic, approximately 60,000 years ago.

The U.S. Succulent plant. Aloin. Aloin, also known as Barbaloin,[1] is a bitter, yellow-brown colored compound noted in the exudate of at least 68 Aloe species at levels from 0.1 to 6.6% of leaf dry weight (making between 3% and 35% of the total exudate) (Groom & Reynolds, 1987), and in another 17 species at indeterminate levels [Reynolds, 1995b]. 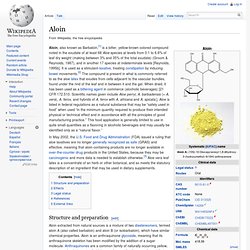 It is used as a stimulant-laxative, treating constipation by inducing bowel movements.[2] The compound is present in what is commonly referred to as the aloe latex that exudes from cells adjacent to the vascular bundles, found under the rind of the leaf and in between it and the gel. When dried, it has been used as a bittering agent in commerce (alcoholic beverages) [21 CFR 172.510. Scientific names given include Aloe perryi, A. barbadensis (= A. vera), A. ferox, and hybrids of A. ferox with A. africana and A. spicata.].

Aloe. Succulent plants, such as this aloe, store water in their enlarged fleshy leaves, stems, or roots, as shown in this split aloe leaf. 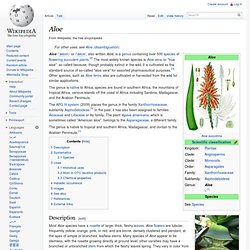 This allows them to survive in arid environments. Aloe /ˈæloʊiː/ or /ˈæloʊ/, also written Aloë, is a genus containing over 500 species of flowering succulent plants.[2] The most widely known species is Aloe vera, or "true aloe", so called because, though probably extinct in the wild, it is cultivated as the standard source of so-called "aloe vera" for assorted pharmaceutical purposes.[3] Other species, such as Aloe ferox, also are cultivated or harvested from the wild for similar applications. The genus is native to Africa; species are found in southern Africa, the mountains of tropical Africa, various islands off the coast of Africa including Sardinia, Madagascar, and the Arabian Peninsula. The genus is native to tropical and southern Africa, Madagascar, and Jordan to the Arabian Peninsula.[1] Hypha. Fungal Hyphae Cells 1- Hyphal wall 2- Septum 3- Mitochondrion 4- Vacuole 5- Ergosterol crystal 6- Ribosome 7- Nucleus 8- Endoplasmic reticulum 9- Lipid body 10- Plasma membrane 11- Spitzenkörper 12- Golgi apparatus A hypha (plural hyphae) is a long, branching filamentous structure of a fungus, and also of unrelated Actinobacteria.[1] In most fungi, hyphae are the main mode of vegetative growth, and are collectively called a mycelium; yeasts are unicellular fungi that do not grow as hyphae. 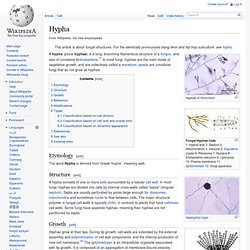 Etymology[edit] The word Hypha is derived from Greek 'huphe', meaning web. Structure[edit] Growth[edit] As a hypha extends, septa may be formed behind the growing tip to partition each hypha into individual cells. Behaviour[edit] The direction of hyphal growth can be controlled by environmental stimuli, such as the application of an electric field. Glomalin. Glomalin is a glycoprotein produced abundantly on hyphae and spores of arbuscular mycorrhizal (AM) fungi in soil and in roots. 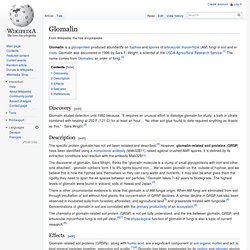 Glomalin was discovered in 1996 by Sara F. Wright, a scientist at the USDA Agricultural Research Service.[1] The name comes from Glomales, an order of fungi.[2] Discovery[edit] Glomalin eluded detection until 1992 because, “It requires an unusual effort to dislodge glomalin for study: a bath in citrate combined with heating at 250 F (121 C) for at least an hour.... No other soil glue found to date required anything as drastic as this.” - Sara Wright.[3] Description[edit] The specific protein glomalin has not yet been isolated and described.[4] However, glomalin-related soil proteins (GRSP) have been identified using a monoclonal antibody (Mab32B11) raised against crushed AMF spores.

There is other circumstantial evidence to show that glomalin is of AM fungal origin. Arbuscular mycorrhiza. It has been said that it is quicker to list the plants that do not form mycorrhizae than those that do.[2] This symbiosis is a highly evolved mutualistic relationship found between fungi and plants, the most prevalent plant symbiosis known,[3] and AM is found in 80% of vascular plant families in existence today.[4] The tremendous advances in research on mycorrhizal physiology and ecology over the past 40 years have led to a greater understanding of the multiple roles of AMF in the ecosystem. 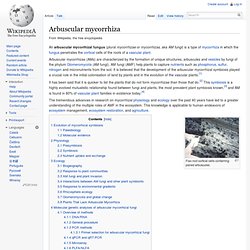 This knowledge is applicable to human endeavors of ecosystem management, ecosystem restoration, and agriculture. Flax root cortical cells containing paired arbuscules Evolution of mycorrhizal symbiosis[edit] Paleobiology[edit] Both paleobiological and molecular evidence indicate that AM is an ancient symbiosis that originated at least 460 million years ago. The Early Devonian saw the development of terrestrial flora. Aloe vera. Aloe vera (/ˈæloʊiː/ or /ˈæloʊ/) is a succulent plant species. 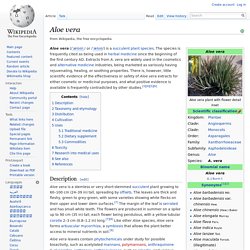 The species is frequently cited as being used in herbal medicine since the beginning of the first century AD.