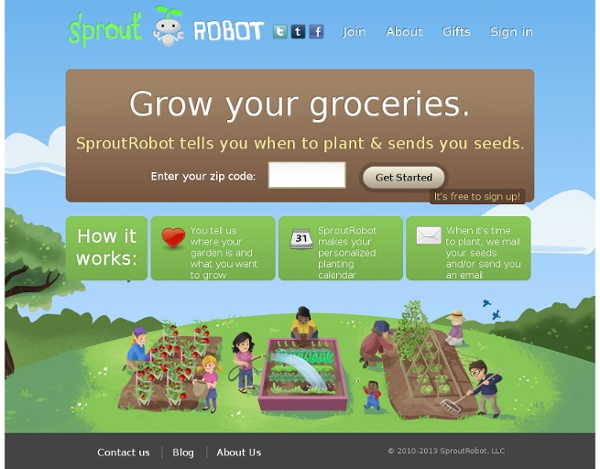 Prophecy of the Popes Final part of the prophecies in Lignum Vitæ (1595), p. 311 The prophecies conclude with a pope identified as "Peter the Roman", whose pontificate will allegedly bring the destruction of the city of Rome.[3] History[edit] Statue of Saint Malachy (1094–1148), to whom Wion attributes the authorship of the prophecies. Malachy died over four centuries before the prophecies first appeared. Gardening Tips - 7 Habits of Successful Gardeners Originally published January 2009 Or is it the Seven Pillars of Horticultural Wisdom? As everyone's resolutions remind us, we love attaching a number to advice, a number smaller than the one I regard as most realistic: The Twenty Three Thousand Four Hundred and Sixty-Two Things It's Important to Remember Before Getting Out of Bed. So be warned: I haven't really honed it down to only seven; these are just the first seven essentials that came to mind when I decided to do this. And not in order, either.

10 Weird Plants From Around The World at Ideal Home Garden Strange and unusual plants make great conversation pieces. All around the world there are unusual flowers that will give you plenty to talk about. Some of the world’s weirdest plants sport flowers with unexpected animal features. Others are masters of camouflage and pest removal. And, many plants have unusual growth habits and fragrances. Here are 10 weird and wacky plants that can be grown by any gardener. The Farming Technique That Could Revolutionize the Way We Eat - Roman Gaus On an early June morning in 2010, I stood outside the Aquaponics research facility at the University of Applied Sciences, perched on a green hilltop in Wädenswil, Switzerland, 20 minutes outside Zurich. The lab director, Andreas Graber, had finally given in to my persistent calls requesting a visit. Graber, Switzerland’s most prolific aquaponics researcher, had been publishing on the subject for eight years — a long time in this young field. Graber greeted me, and we stepped inside. The lab, bright and humid under its greenhouse roof, contained a few round fish basins, each about 6 feet wide.

President Obama Signs Indefinite Detention Bill Into Law December 31, 2011 CONTACT: media@dcaclu.org WASHINGTON – President Obama signed the National Defense Authorization Act (NDAA) into law today. The statute contains a sweeping worldwide indefinite detention provision. While President Obama issued a signing statement saying he had “serious reservations” about the provisions, the statement only applies to how his administration would use the authorities granted by the NDAA, and would not affect how the law is interpreted by subsequent administrations. Care and Cultivation of Permanent Garden Beds - Organic Gardening One of the basic tenets of organic gardening is to put as much effort into improving soil fertility as you put into growing your crops. When you use permanent garden beds and pathways, you can concentrate on building soil in deeply worked beds that will improve over a period of years, all the while growing robust, disease-resistant vegetables. Permanent vegetable beds also make more efficient use of water and fertilizer, and soil compaction is limited to pathways where repeated footsteps can naturally inhibit the growth of weeds. In the 2008 article Gardening for Keeps, I addressed the practical aspects of designing a garden using permanent beds, pathways and green access corridors (which also produce nutrient-rich grass clippings). In this article, I will cover some benefits of permanent garden beds, plus discuss the invisible soil food web and how you can conserve and enrich the life-forms that create superior soil fertility. Limiting Soil Compaction With Dedicated Beds

Hydrangea Questions and Answers What types of hydrangeas are available? While there are approximately 23 species of Hydrangea, only five are widely cultivated in the U.S. The most popular species is Hydrangea macrophylla, which is commonly known as bigleaf, French, garden or florist’s hydrangea. This Japanese native is rated as hardy to USDA cold-hardiness zone 6. It produces large inflorescences of white, pink or blue flowers in early summer.

This New Neighborhood Will Grow Its Own Food, Power Itself, And Handle Its Own Waste If you live inside one of the houses in a new neighborhood being built in an Amsterdam suburb, your dining room might be next to an indoor vegetable garden. Outside, you'll have another seasonal garden. And down the street, almost everything you eat will be grown in high-tech vertical farms. The neighborhood will be the first ReGen Village, a new type of community designed to be fully self-sufficient, growing its own food, making its own energy, and handling its own waste in a closed loop. Any household waste that can be composted will feed livestock or soldier flies.

Start a Quick and Easy Food Garden If your yard has at least a 20-by-28-foot space that gets full or almost full sun, you can grow enough vegetables to have fresh food all season with surprisingly little effort. Go ahead and dig beds if you’re lucky enough to have naturally fertile, well-drained soil, but don’t let soil flaws stop you from starting a food garden. Instead, use this quick and simple bag gardening technique. This method is almost too easy to believe, but it absolutely works! Fertilizing and Plant Food: Learn how and when to feed and fertilize garden plants and flowers The best way to know how much, and at what proportion, to add nutrients to the soil is with a soil test. Simple soil tests can be purchased at garden supply centers. Once you determine what nutrients are lacking or in abundance, you can amend the soil to correct most problems. There are four main nutrients that are most likely to be a problem in the soil: nitrogen, phosphorus, potassium, and calcium.