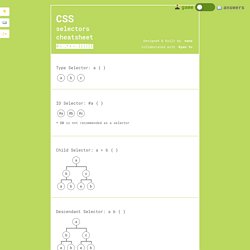 Author Andrej January 25, 2018 Made with About the code. 8 Snippets That Show the Power of CSS Grid. By now, we’ve seen some impressive examples of what CSS Grid can do. 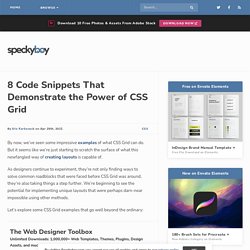 But it seems like we’re just starting to scratch the surface of what this newfangled way of creating layouts is capable of. As designers continue to experiment, they’re not only finding ways to solve common roadblocks that were faced before CSS Grid was around, they’re also taking things a step further. We’re beginning to see the potential for implementing unique layouts that were perhaps darn-near impossible using other methods. Let’s explore some CSS Grid examples that go well beyond the ordinary: The Virtual Shoe Rack. 16 top CSS animation examples. Used well, CSS animation is an incredibly useful and powerful tool. 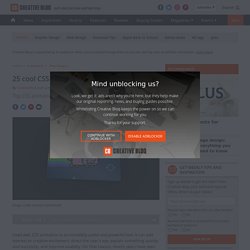 It can add interest or creative excitement, direct the user's eye, explain something quickly and succinctly, and improve usability. For that reason, recent years have seen more and more animation on sites and in app. In this article, we round up some of the coolest CSS animation examples we've seen, and show you how to recreate them. CSS: Grid Layout in alternativa a FlexBox. Visual design con WordPress per creare. Swiss in CSS. CSS vs SVG: Styling Checkboxes and Radio Buttons : Adobe Dreamweaver Team Blog.

This is the second article in a series of articles comparing some commonly-used CSS techniques to their SVG counterparts, showing the pros and cons of each, in an attempt to help you make a better decision as to which of these two to choose when solving common design problems on the web. 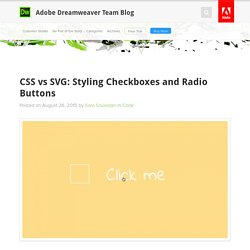 In the previous post, we talked about creating textured text effects using both CSS and SVG, and came to the conclusion that SVG is currently more capable and powerful than CSS is in doing that. In this post, we’ll tackle custom HTML form styling—specifically checkbox and radio inputs. Form elements are particularly not the easiest elements to style with CSS, as you might already know. But they’re also not particularly hard to style either.

To overcome the limitations brought by the fact that we have no style selectors for styling the innards of checkbox and radio inputs in CSS, developers have long used one popular way to style these inputs: using images. Top Free CSS3 Code Generators. Newer online tools & webapps allow developers to create rapid websites without manually writing each individual line of code. 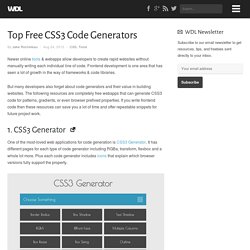 Frontend development is one area that has seen a lot of growth in the way of frameworks & code libraries. But many developers also forget about code generators and their value in building websites. The following resources are completely free webapps that can generate CSS3 code for patterns, gradients, or even browser prefixed properties. If you write frontend code then these resources can save you a lot of time and offer repeatable snippets for future project work. 1. One of the most-loved web applications for code generation is CSS3 Generator. 2. For a more dynamic application check out the Enjoy CSS website. 3. CSS Lint. How to create dynamic buttons with CSS 3D. Last year we developed the new Orangina website with Achtung, with the aim of creating something that felt organic and playful.

However, one simple feature turned out to be quite challenging: the buttons. The unorthodox shapes we were after can be tedious to create using CSS. Often the easiest option is to resort to using images – however, this is not always ideal as it makes everything far less flexible. Don't miss this You can create a lot of shapes with CSS using 2D transforms and CSS-generated content, but that didn't cut it for this particular shape. Our button is actually a shape rendered in 3D space, but since it is only one colour, the 'depth' becomes unnoticeable, creating the illusion of sloping edges. Cosa sono less e sass? A cosa servono? - CreativeProShow. Premesso che io ancora ho difficoltà a voler usare entrambi. 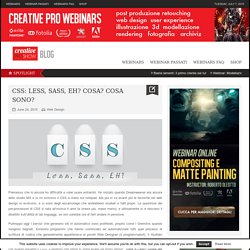 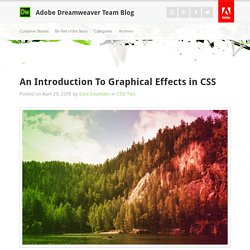 If you are like me, then that sounds like music to your ears. I don’t do well in graphics editors and would choose a code path over a graphical editor path any day. CSS now allows us to do more graphical work right in our text editors. Examples of graphical effects that we can create using CSS today include textured text effects, photo effects like color editing/tweaking, photo and element blending that also enable us to blend elements with other elements, clipping content to arbitrary shapes, and more. Creare una maschera con il CSS con “Mask box image”Total Photoshop - Il primo sito di Video tutorial in Italiano su Photoshop, Fotografia, Illustrator, Premiere, After Effects, Dreamweaver e WordPress - Total Photoshop - Il primo sito di Video tutorial in.

Gravify. The Problem A long, long time ago (in the summer of 2014), when I did everything in my stylesheet, I came across a peculiar problem. 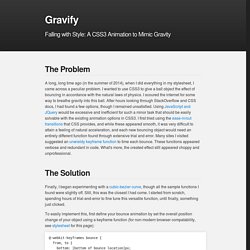 I wanted to use CSS3 to give a ball object the effect of bouncing in accordance with the natural laws of physics. I scoured the internet for some way to breathe gravity into this ball. After hours looking through StackOverflow and CSS docs, I had found a few options, though I remained unsatisfied. Using JavaScript and JQuery would be excessive and inefficient for such a minor task that should be easily solvable with the existing animation options in CSS3. The Solution. CSS Color Names. CSS3.0 Generator. A Single Div. Cody - Free HTML/CSS/JS resources.

A minimal and responsive newsletter form with the addition of some subtle CSS3 animations to enrich the user experience. Browser support ie Chrome Firefox Safari Opera 9+ Flat Drop down Menu using CSS. Making an animated radial menu with CSS3 and JavaScript. Today, let’s look at how we can easily make a simple animated radial menu with CSS3 and JavaScript. Have a look at the demo below and click the button for the radial menu to pop out. The code is readily available in the codepen demo above, so let’s go over some of the specifics. The HTML Let’s look at the HTML. We will be using the HTML5 nav element with some links inside of it and the button to activate the radial menu. I have also used Font Awesome icons and added the necessary classes to the a-tag to get some nice icons for the menu items in the radial menu.

CSS3 Background Blends: Photoshop Background Effects in pure CSS3. Jul 29 2014 With CSS3 we are able to add more than one background to an element. In doing so background images and/or colors are piled upon each other, just as you know from the layers concept of Photoshop. While transparencies exist, the underlying background file or color will shine through.

The new CSS3 Background Blends allow for even more possibilities to combine several backgrounds into one impressive appearance. 5 things you won't believe are only built with CSS - Modern WebModern Web. Trevan Hetzel breaks down 5 UI interactions typically built with JavaScript, implemented only with CSS. By Trevan Hetzel I often find myself amazed at what plain ‘ol CSS can do. People float things with CSS, they clear things, they color things, they make things fancy. Creating a Full Width Responsive Tiled Menu with CSS. Get Source View Demo Introduction Full width tile navigations are a crisp way to display your site’s navigation and give end to end coverage, creating a very full-bodied effect for the user. In this tutorial, we’re going to make it fully responsive, and throw in some quick JavaScript at the end to show/hide the navigation on smaller screen widths via a navigation toggle button.

CodePen - Front End Developer Playground & Code Editor in the Browser. Pure. CSS Gradients with background-blend-mode. The CSS background-blend-mode property blends the backgrounds of an element: colors, images, and gradients, together with Photoshop-like blend modes (multiply, screen, overlay, etc). It is very new and is curently supported by the latest releases of Chrome, Firefox, and Opera. The property is coming to Safari soon but not available in Internet Explorer. CSS gradients are already immensely powerful in creating patterns, as shown in Lea Verou's CSS Patterns Gallery. Create a Masked Background Effect With CSS. CSS Shapes Editor for Brackets. LESS « Il linguaggio di stile dinamico</span> Transit - CSS transitions and transformations for jQuery. What about older browsers?

Transit degrades older browsers by simply not doing the transformations (rotate, scale, etc) while still doing standard CSS (opacity, marginLeft, etc) without any animation. Delays and durations will be ignored. // Delegate .transition() calls to .animate()// if the browser can't do CSS transitions.if (! $.support.transition) $.fn.transition = $.fn.animate; 12 Common CSS Mistakes Web Developers Make. Let’s get real for a second here. As far as web languages go, CSS is arguably the simplest. I mean, really, what could be easier than a simple list of properties affecting an element? And the syntax is almost like written English. Want to change the font size?