15 Things You Should Know about Caffeine 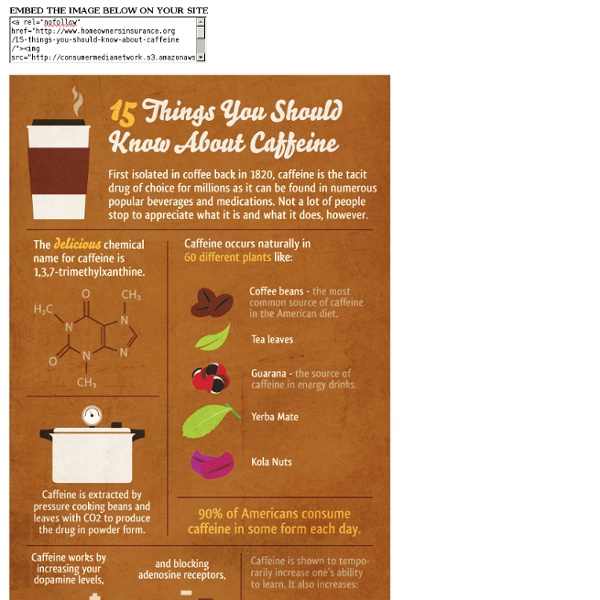 Infographics & Data Visualizations - Visual.ly How to Forecast Weather | Ever wondered how to forecast the weather without actually using instruments? Check the Clouds: Clouds can tell us a lot about the weather. For example, they can tell us if it’s going to be warmer on a particular night by simply being there. That’s because they prevent heat radiation from escaping. Check the Humidity: If you’re one of those people whose hair gets all curly when it gets really humid out, you know exactly what this is about. Check the Animals: Birds only fly in the sky when they expect fair weather ahead. Look at the Rainbow (but only in the west) and look for a Red Sky: If you see one in the west, it means a major storm front is coming. Check the Air: If it smells like a compost heap, expect some rain soon. Check the Moon: Seen any red moons lately? Check the Wind: If you can tell which way the wind is blowing, you can tell if there is a storm approaching. A Few More Ideas: Make a campfire – If the smoke goes straight up, clear skies ahead.

15 Things You Probably Didn’t Know About Star Trek Did you know that the famous Vulcan salute was invented by Leonard Nimoy and based on a priestly blessing performed by Jewish Kohanim? Also, if you’re looking for an amazing Gift for a Star Trek fan, be sure to check out Star Trek Federation: The First 150 Years, a hardcover book documenting the first 150 years of the intergalactic democracy up until the year 2311. [Via Reddit] 5 Logical Fallacies That Make You Wrong More Than You Think The Internet has introduced a golden age of ill-informed arguments. You can't post a video of an adorable kitten without a raging debate about pet issues spawning in the comment section. These days, everyone is a pundit. But with all those different perspectives on important issues flying around, you'd think we'd be getting smarter and more informed. #5. Think about the last time you ran into a coworker or family member spouting some easily disproven conspiracy theory -- somebody who still thinks Obama's birth certificate is a fake or that Dick Cheney arranged 9/11 to cover up his theft of $2.3 trillion from the government. That has literally never happened in the history of human conversation. Getty"OK, so Dick Cheney doesn't have a third arm. The Science: It's called the argumentative theory of reasoning, and it says that humans didn't learn to ask questions and offer answers in order to find universal truths. Yes, kids, being a dick works. So During Your Next Argument, Remember ... #4.

MIT Paper Works out Paradox; Fry may not be own Grandfather It would appear that longstanding and tricky paradox of time travel, that one who travels backward in time could conceivably influence it to the point where the time travel couldn’t have happened is dead. All hail the longstanding and tricky paradox. This, the “grandfather paradox,” is so named because of the thought experiment used to illustrate it. A time traveler could theoretically go back in the past and murder his own grandfather, which would render the time traveler non extant, and thus would lead to the paradox of the time traveler never having been able to go back in time in the first place. Pudding. The same holds true in a less dramatic fashion for subatomic particles like quarks and photons, which hold a much higher likelihood of ever traveling into the past, based on the strange, spooky behavior they’ve demonstrated for the people who’ve studied and been alarmed by them thus far. This little conundrum made time travel fundamentally dangerous, if not impossible.

7 Man-Made Substances that Laugh in the Face of Physics The universe is full of weird substances like liquid metal and whatever preservative keeps Larry King alive. But mankind isn't happy to accept the weirdness of nature when we can create our own abominations of science that, due to the miracle of technology, spit in nature's face and call it retarded. That's why we came up with... #7. What do you get when you suspend nanoparticles of iron compounds in a colloidal solution of water, oil and a surfactant? A ferrofluid is a liquid that reacts to magnetic fields in trippy ways that make you think that science is both magical and potentially evil. Tell us that didn't look like the birth of the most sinister dildo ever. What happens is that when a magnetic field is applied to the fluid, the particles of iron compound inside align to it. What the Hell is it Used For? Ferrofluids have a lot of pretty mundane uses, from lubricating and protecting hard drives to providing heat conduction in speakers, but their primary use is in looking cool. #6. #5.

Fossils Of 500 Million Year Old Marine Predator Anomalocaris Discovered | FinestDaily ShareShare A recent discovery in the field of paleontology reveals probably the oldest predator known to man. The fossils found on Kangaroo Island are being studied by scientists from the University of Adelaide, Australia. The fossilized eyes belonged to the 500 million-year-old Anomalocaris, a marine creature believed to be at the top of the food chain in prehistoric times. A full story regarding this subject will be available in December’s issue of Nature. Taking into consideration the studies so far, it seems that the Anomalocaris had extremely acute vision, considered better than any other insects or crustaceans, even by today’s standards. Thanks to the discovery of its eyes, meticulous analysis shows amazing details when it comes to optical design, with some similarities much alike contemporary crabs, flies and kin. These fossils make the Anomalocaris the ancestor of today’s arthropods, alongside other evolutionary implications that affect a lot of species.

100 Very Cool Facts About The Human Body The Brain The human brain is the most complex and least understood part of the human anatomy. There may be a lot we don’t know, but here are a few interesting facts that we’ve got covered. Nerve impulses to and from the brain travel as fast as 170 miles per hour. Hair and Nails While they’re not a living part of your body, most people spend a good amount of time caring for their hair and nails. Facial hair grows faster than any other hair on the body. Internal Organs Though we may not give them much thought unless they’re bothering us, our internal organs are what allow us to go on eating, breathing and walking around. The largest internal organ is the small intestine. Bodily Functions We may not always like to talk about them, but everyone has to deal with bodily functions on a daily basis. Sneezes regularly exceed 100 mph. Sex and Reproduction As taboo as it may be in some places, sex is an important part of human life as a facet of relationships and the means to reproduce. Senses