Martin-molin-marble-machine-music_n_9369816. An 8-year-old girl receives gifts from the crows she feeds. Pure of heart Eight-year-old Gabi Mann has been feeding crows in her family's Seattle backyard garden for about four years now. 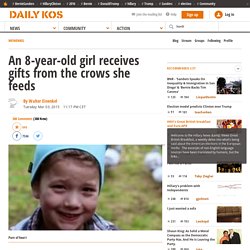 It started as an accident: Gabi's relationship with the neighbourhood crows began accidentally in 2011. She was four years old, and prone to dropping food. She'd get out of the car, and a chicken nugget would tumble off her lap. Feeding the crows A couple of years later, Gabi and her sister began setting out food for the crows on a daily basis. The crows would clear the feeder of peanuts, and leave shiny trinkets on the empty tray; an earring, a hinge, a polished rock. Some of the gifts Gabi has gotten over the years There has been ample research done over the past few decades that show that birds, specifically crows, are considerably more intelligent than first thought. No doubt, Gabi's collection is quite impressive. Loteria TVC. Iris Grace Painting. The Marbleocity Marble Machine Is Made Of Pure Wooden Goodness. In the fever dream that was my youth, I was enamored with an odd sketch on Sesame Street featuring a ball that goes up and down a long, windy track before ending up as a pile of powder. 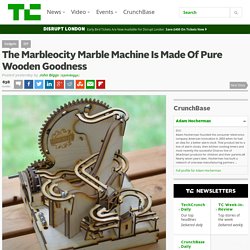 This sequence teaches us about the impermanence of existence and, more important made me love marble tracks. Now Adam Hocherman, author of a series called Going It Alone and an inventor, is bringing bally back. His new project is called Marbleocity and it’s a DIY marble experimentation kit. It’s made entirely of wood and lets you and your STEM-loving kids build clockwork machines and run marbles up and down them. The first project, called the Dragon Coaster, will cost $50 on Kickstarter and will ship next February. “My experience was with making plastic injection molded type electronic devices in Asia. Hocherman wants to add more kits to the mix including the “Skate Park, Maltese Cross, and Amazing Race.” Hocherman is well over his goal of $14,000 and the kits will be made in America using laser-cut wood. Cockatoo running around yelling absolute nonsense (subtitles)

Omgfacts. 2009 / Podalida. Voile Noir: The Sci-Fi Short Film That Will Leave You Wanting More. Learn How To Create A Screen That Only You Can See. 4fun =)) pic.496. You'll never think the same way again. . . The Revelation. The Two Phase Alternating Current induction motor. 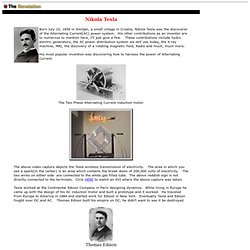 J.P. Morgan had built one of the largest financial empires of the century. Nikola was invited to Morgan's home. Tesla asked J.P. Morgan for the money he needed to start the Wardenclyffe project. A Visual Glossary of Symbols. Think or Thwim » How To Hide An Airplane Factory.

During World War II the Army Corps of Engineers needed to hide the Lockheed Burbank Aircraft Plant to protect it from a Japanese air attack. 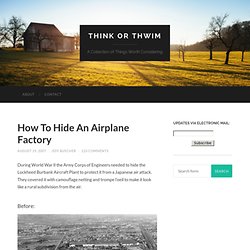 They covered it with camouflage netting and trompe l’oeil to make it look like a rural subdivision from the air. Before: After: Update:flatrock.org has more pictures. :: Good Shit :: Oviatt Digital Library Collections. Left Hand.

» How to make a Plugsuit Side tutorial- Skin tight gloves KhaosKostumes. I hate gloves.

Every costume maker does, they’re fiddily and a bad fitting glove will show up far more than a bad fitting jacket will. Here’s how I make lycra gloves, with a helping hand from my friend- freezer paper! Freezer paper is this stuff. You use it to wrap meat and put it in the freezer. But it has secret costume uses and is one of my greatest weapons in the fight with the dreaded evil of lycra. First, draw around your hand on a square of freezer paper on the matt side. Look how smart you are! Then iron the shiny side of the freezer paper onto the wrong side of your lycra fabric.