We are the 1 percent: We stand with the 99 percent 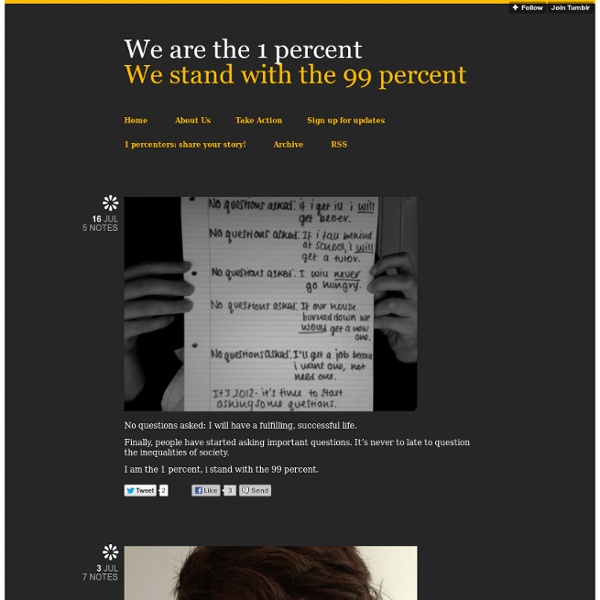 The 1% are the very best destroyers of wealth the world has ever seen | George Monbiot If wealth was the inevitable result of hard work and enterprise, every woman in Africa would be a millionaire. The claims that the ultra-rich 1% make for themselves – that they are possessed of unique intelligence or creativity or drive – are examples of the self-attribution fallacy. This means crediting yourself with outcomes for which you weren't responsible. Many of those who are rich today got there because they were able to capture certain jobs. This capture owes less to talent and intelligence than to a combination of the ruthless exploitation of others and accidents of birth, as such jobs are taken disproportionately by people born in certain places and into certain classes. The findings of the psychologist Daniel Kahneman, winner of a Nobel economics prize, are devastating to the beliefs that financial high-fliers entertain about themselves. Such results have been widely replicated. So much for the financial sector and its super-educated analysts. This is now changing.

10 of the World's Most Insanely Luxurious Houses - Oddee.com (luxurious house, amazing houses) Antilla, Mumbai - The first Billion dollar home Mukesh Ambani, the fifth richest man in the world and head of the Mumbai based petrochemical giant Reliance Industries is estimated to be worth somewhere in the region of $43 billion. He is also the owner to-be of a 27-story skyscraper in downtown Mumbai that is to cost him colossal $2 billion! His wife Nita Ambani was staying in the Mandarin Oriental in New York and was so impressed with the interior Asian style decor that she wanted something similar for her to live in. Updown Court, England - The most important private residence to be built in England since the 19th century ($150 million) Updown Court is situated only 25 miles from London, and through a pair of large sophisticated iron gates, one can see a palatial construction of immense scale and beauty. Versailles, Florida - The largest family home ever built in the US The property was called Versailles as the entrance was modeled after the Palace of Versailles in France.

Forbes list of billionaires (2011) The World's Billionaires is an annual ranking of the world's wealthiest people, compiled and published by the American business magazine Forbes in March. The total net worth of each individual on the list is estimated, in United States dollars, based on their assets and accounting for debt. Royalty and dictators whose wealth comes from their positions are excluded from these lists.[1] The list has been published each year in March since 1987.[2] Microsoft founder Bill Gates has topped the list 16 of the past 21 years, including the 2015 list. Methodology[edit] Each year, Forbes employs a team of more than fifty reporters from a variety of countries to track the activity of the world's wealthiest individuals.[5] Preliminary surveys are sent to those who may qualify for make the list. Family fortunes dispersed over a large number of individuals are included only if those individuals' holdings are worth more than a billion dollars. 2015[edit] 2014[edit] 2013[edit] 2012[edit] 2011[edit] General

Occupy Wall Street: Thoughts from a Member of the One Percent « Venture Capital I walked from the West Side Highway to Chinatown yesterday in the early afternoon. I passed not one, but two marches uptown to Times Square and walked along with them for a while. New York City is in the throes of the OccupyWallStreet protests. I’ve been thinking a lot about this movement, what it means, and what it could lead to. I spent a good part of Thursday afternoon in Zuccotti Park. I empathize with the basic complaint of the #OWS movement – that the rich are getting richer and everyone else is getting poorer. And I’ve got issues with some of the subgroups in the #OWS movement. Our institutions are failing us. And yet, I’m an optimist. So much depends on what we get out of this growing desire for change.

The One Percent (2006 The One Percent The film premiered on April 29, 2006, at the Tribeca Film Festival. It was reported to have been purchased by HBO and a revised version of the film, substantially re-edited and incorporating footage shot since the 2006 festival screening, premiered on February 21, 2008 on HBO's Cinemax. Interviews[edit] The film is 79 minutes long and features interviews with a diverse range of individuals: Reception[edit] The documentary was well received in the social activism community and the crystallization of the term "The 1%" proved useful in future activism, including the Occupy Wall Street protests. The basic premise of the documentary has been substantiated at numerous levels of U.S. and global society. See also[edit] References[edit] External links[edit]