David Gauntlett: Making is Connecting: The social meaning of creativity, from DIY and knitting to YouTube and Web 2.0, book published by Polity, 2011 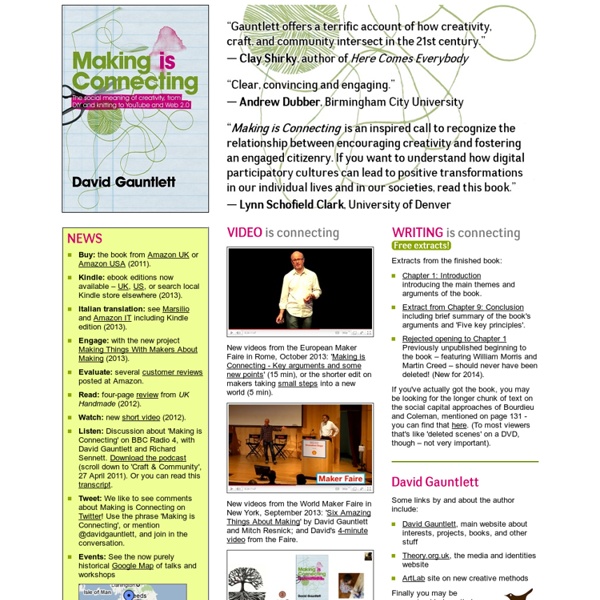 what is a group? theory, practice and development What is a group? How are we to approach groups? In this article we review the development of theory about groups. We look at some different definitions of groups, and some of the key dimensions to bear in mind when thinking about them. contents: introduction · the development of thinking about groups · defining ‘group’ · types of group · the benefits and dangers of groups · some key dimensions of groups [group interaction, group interdependence, group structure, group goals, group cohesiveness] · group development · conclusion · further reading and references · how to cite this article Groups are a fundamental part of social life. The development of thinking about groups Just how we define ‘group’ and the characteristics or ideas we use has been a matter of debate for many years. As interest in group processes and group dynamics developed and accelerated (most particularly since the 1980s) the research base of the area strengthened. Defining ‘group’ Types of groups Planned groups. Roles.

Schools must embrace mobile technology Testing out the latest school gadgets The need for schools to prepare for 21st century learning was top of the agenda at this year's BETT conference. They must embrace mobile technologies, games, podcasts and social networking, according to leading educationalist Professor Stephen Heppell. Schools should also break away from traditional classroom and curriculum models, he argued. The gap between those schools embracing technology and those not is getting bigger, he said. Prof Heppell was speaking to delegates at BETT, the world's biggest educational technology show. Technology revolution Meanwhile the UK's minister for Schools and Families Vernon Coaker reiterated the government's commitment to putting technology at the heart of the school curriculum. "Teachers need access to innovative services. "Cutting edge technology is the cornerstone of our reforms," he added. But in that timeframe there could be a big divide between schools, thinks Professor Heppell. Cells and bells Skyping infants

whatworksblog learning • ingenuity • research • policy • design • technology • delight • (+ sailing!) Social Capital - What is Social Capital Social capital refers to the institutions, relationships, and norms that shape the quality and quantity of a society's social interactions. Increasing evidence shows that social cohesion is critical for societies to prosper economically and for development to be sustainable. Social capital is not just the sum of the institutions which underpin a society – it is the glue that holds them together. Some key concepts are elaborated below: Horizontal Associations A narrow view of social capital regards it as a set of horizontal associations between people, consisting of social networks and associated norms that have an effect on community productivity and well-being. Social capital also has an important "downside" (Portes and Landholt 1996): communities, groups or networks which are isolated, parochial, or working at cross-purposes to society's collective interests (e.g. drug cartels, corruption rackets) can actually hinder economic and social development. Vertical and Horizontal Associations

experimentsincommunity Guidelines for Group Collaboration and Emergence I’m in the middle of taking a course on Virtual Learning Environments (syllabus here), and reading a few chapters from Adaptive Software Development by Highsmith. It approaches the team-building and collaboration process from the perspective of complex adaptive systems theory, and contains some interesting insights in evolutionary development and creating environments where emergence can occur. I’ve created a summary of a chapter that I’d like to share, as I think it can be valuable for many of us, and specifically for the community of practitioners around the junto concept. Collaboration is an act of shared creation or discovery. (schrage89) As a distributed group of individuals (agents) within a network, we form a complex adaptive system. Barriers to Collaboration 1. This style works well for organizations that operate effectively by regarding their people as interchangeable cogs in a machine – following specific rules in a predictable environment which is structured hierarchically. 2.