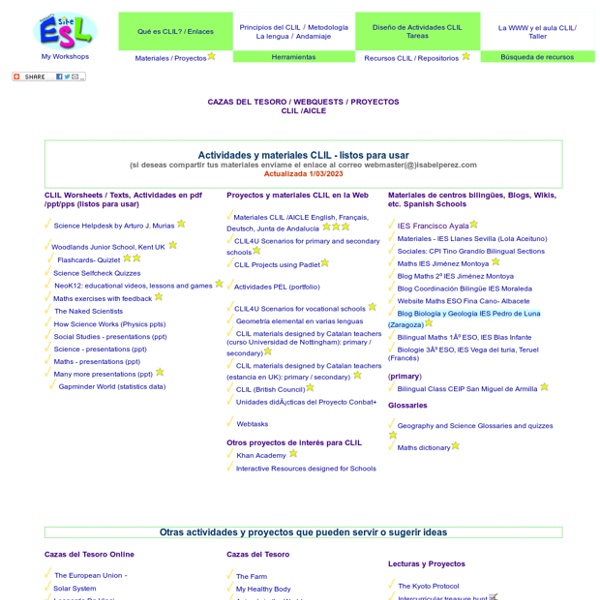 Clil4U CLIL implementation with pools of resources for teachers, students, and pupils Back to Top The project needs were based on several reports, e.g. Eurydice “Content and Language Integrated Learning (CLIL) at School in Europe 2006” which in “Factors inhibiting general implementation” points at a need for training language teachers in the special skills needed to provide CLIL through initial and in-service training programs devoted to methods used to teach a subject in other languages. The report also points at a need for teaching materials geared to CLIL in the target language that cover subjects in the national curriculum. In “CLIL/EMILE in Europe”, the recommendations for extending good practice proposes to develop thematic CLIL modules that would also act as a means for developing teacher competence in CLIL. CLIL (Content and Language Integrated Learning) is emerging across Europe where only six countries appear to be bystanders.

Berritzegune Nagusia A Content-Based approach to teaching and learning second languages has been adopted both for INEBI and BHINEBI. The content-based teaching-learning approach provides a very adequate frame to organise various aspects of this proposal. It helps make the acquisition of language parallel to that of natural language acquisition and of concept development. This approach promotes the teaching of languages through the teaching of contents and it is based on a communicative methodology, far away from the traditional and grammatical language teaching methods that propose unreal and often irrelevant activities.

Useful Links AA Foundation for Road Safety Research www.aatrust.com Arrive Alive www.arrivealive.info Association of Industrial Road Safety officers (AIRSO) www.airso.org.uk Magazines for children and teenagers: our top picks Magazines for children, tweens and teens, including comics and newspapers for children. This list features recommended titles suitable for use in primary and secondary school classrooms and libraries in the UK. Suggested titles include subscriptions for publications suitable for pupils aged 3-6, 7-12 and 13+; and also periodicals for teachers, Heads of Departments, subject coordinators, school leaders, and school librarians.

KS what? They key stages clarified once and for all When looking for interesting new authentic material to use in my lesson, I often encounter the fact that the different education orientated materials found on the web are categorised in different key stages. That’s fine, it is a matter of simply linking the correct key stage to my target age range. If only it were that simple. Differences between UK and USA When I tried to figure out which books would be best for my students according to the key stages, I had to visit multiple websites in order to understand exactly what books I had to buy. Indeed, Wikipedia was actually wrong this time. AAA Math Index of Exercises A-B C D E F G H I-K L M N O P Q-R S T-Z AAA Math Home (Use the "BACK" button to return to top) Bloc de l'Aula d'Anglès de l'Escola del Parc, El Prat de Llobregat THE RESPIRATORY SYSTEM 3r The respiratory system is a group of organs that work together to help us breathe. + We breathe in air through our nose and mouth. + The air goes down into our lungs. + Oxygen is passed to the circulatory system, where it moves around the body.

The Librarian and Story Behind The Vintage Library Posters! Last year, I wrote a post about these sweet little library posters from 1965. You can read the post from my blog here. These were created to help children with topics such as research, finding a book using the card catalog and even borrowing books from the library. I love these posters so much. They even inspired my friends at Buncee and I to create lots of stickers, animations, sayings, background and even more special assets so librarians can create their own wonderful posters and different kinds of branding and signage too. Tests created by students: CLIL at its finest For some time now, I have asked students to create activities for each other. According to Bloom, creating is a high level thinking skill, so asking this of students could be quite a challenge. Another reason for doing this activity is to help students remember things better. After all, you will learn more if you talk about the activity than if you just copy it from the book. Still I found this activity not to be as effective as it could be, so I decided to add some scaffolding to make sure the activity would be more effective.

Clil4U CLIL implementation with pools of resources for teachers, students, and pupils Back to Top The project needs were based on several reports, e.g. Eurydice “Content and Language Integrated Learning (CLIL) at School in Europe 2006” which in “Factors inhibiting general implementation” points at a need for training language teachers in the special skills needed to provide CLIL through initial and in-service training programs devoted to methods used to teach a subject in other languages. The report also points at a need for teaching materials geared to CLIL in the target language that cover subjects in the national curriculum.

Science math language school project classroom dialog cyberpal Think together our feelings, emotions and thoughts about Peace: peace in the world, interior peace, Peace development.. The idea of the project is sending Peace messages to students of different countries. What's Peace for you? What does Peace mean for you? Do you help keep Peace? How to Plan a Book Fair Posted by Kate White You’ve agreed to plan the book fair this year? Have no fear! Five of the best CLIL resources online - CLIL Media In the posts on this website I usually share my opinion on CLIL as well as share some ideas of others. This time however, I would like to share CLIL resources that I think are really worth your time and can be used to advance both your knowledge of CLIL as well as help you with ideas for your lessons. 1.

How do we know what color dinosaurs were? - Len Bloch The dinosaurs were a large group of animals that first appeared in the fossil record about 227 million years ago. Then, about 65 million years ago, most of the dinosaurs went extinct, but one group– the birds– continues to thrive. The era during which the non-avian dinosaurs lived is called the Mesozoic. The Mesozoic is divided into three periods called the Triassic, Jurassic, and Cretaceous; the bird-like dinosaurs didn't appear until the Jurassic, and they continued into the Cretaceous.