50 Guerrilla Marketing Tactics You Should Be Using 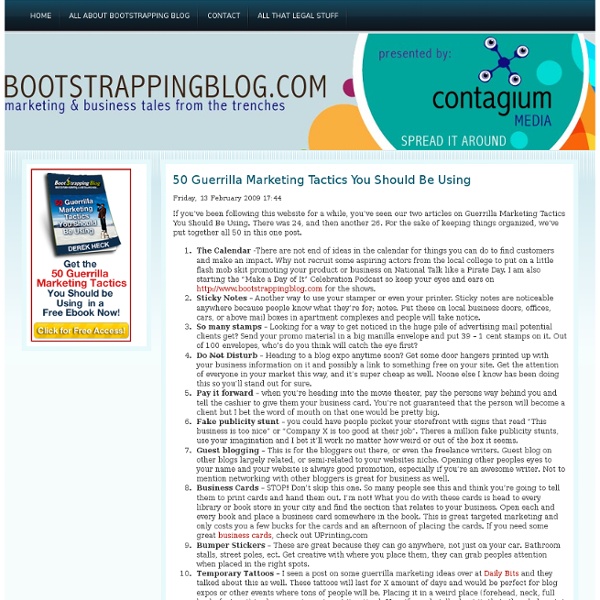 50 Guerrilla Marketing Tactics You Should Be Using Friday, 13 February 2009 17:44 If you’ve been following this website for a while, you’ve seen our two articles on Guerrilla Marketing Tactics You Should Be Using. There was 24, and then another 26. For the sake of keeping things organized, we’ve put together all 50 in this one post. The Calendar -There are not end of ideas in the calendar for things you can do to find customers and make an impact.

Most creative and interesting advertisements for 2011 It is always said that first impression is the best impression so to grab public attention towards their products the agencies and the large conglomerates stick to the creative advertisements. These advertisement techniques and unique idea helps you to spread your product or services successfully. Whether the ad is about cars, cool drinks, electronics anything which you think off; with its hilarious and creative ideas will either impress you or makes you look twice. We will take you to an excursion into the world of stunning creative ads enjoy! About the author

history HISTORY: AMERICAN ADVERTISING IN THE TWENTIETH CENTURY Between the Civil War and World War I, advertising grew tremendously as a field, though no one thought of it as a science. The United States experienced a boom in newspaper and magazine publishing funded largely by advertisers. Every major city had inexpensive competing dailies and a national magazine industry grew. ADVERTISING AS MASS PSYCHOLOGY Advancements in photographic technology and the emergence of radio definitely encouraged the move away from text-driven advertising. As psychology called into question the Enlightenment vision of humans driven by reason, advertisers began to attach emotional values like friendship and status to products. So social scientists from academia followed Watson and migrated to sales. Stevenson's insistence on addressing the individuality of the customer while believing in the basic uniformity of human response is a paradox that the advertising industry has never overcome.

7 Day Business Plan Quick Practical, Tactical Tips for Presentations In the past I’ve given some tips for handling meetings effectively, covering topics like: - How not to let your meeting go down a rat hole; - Dealing with the elephant in the room; - Dealing with skeletons in your closet; - How to make meetings discussions, not “pitches” - A tale of two pitches (I eventually invested in the first company that pitched) Today’s post is a subtle one about positioning yourself in a presentation. This might be a VC meeting but also might just be a sales or biz dev meeting. It’s any meeting where you are in a small room and are being called on to present on some form of overhead slides 1. If you look at Diagram A above you’ll see that the presenters are sitting at the opposite end of the table from where the screen is. If you look at Diagram B you’ll see that the people you’re presenting to can look you in the eyes and glance up at the screen. 2. I’ve lately been attending meetings with our shareholders (called LPs or limited partners). 3. 4. 5. 6.

7 Not So Obvious Habits To Maximize Your Productivity I was a big fan of productivity, and, in some respects, I still am. I’ve been a very early adopter of GTD, and, for years, I did my weekly reviews with the discipline of a zen monk. But, eventually, I hit a roadblock. GTD is about getting things “done”, but in life we have much more to experience than “doing”. We feel. We dream. So, I confess I fell out from the GTD wagon. But enough with all this shameless self-promotion intro. So, instead of doing a presentation of the Assess – Decide – Do framework, I chose to isolate only 7 simple tips for today’s post. As a matter of fact, they’re even organized as such. 1. I firmly believe that the art of ignorance should be taught in schools. Especially on Mondays, when all the previous week unprocessed stuff seems to crash on us, try to apply this. Slash out Twitter, Facebook, email. 2. Each tiny task that you finish is an achievement. Tuesdays are great for this habit, because they’re the first link after the week hast started. 3. 4. 5. 6. 7.

7 Ways to Use Brain Science to Hook Readers Writing and brain science Story is universal. There isn’t a society on earth that doesn’t tell stories. It’s no wonder, because stories captivate us in a way nothing else can. And yet, until recently, story was primarily seen as a delightful form of entertainment. Sure, we thought, stories make life much more enjoyable, but they don’t play a necessary role when it comes to survival. Wrong! It turns out story has been crucial to our survival from day one. In the same way that food tastes good so we’ll eat it, stories are entertaining so we’ll pay attention to them. Curiosity is the trigger. In other words, the desire to find out what happens next. This information is a game changer for writers. So, with that in mind, let’s explore 7 ways your story can hook the reader’s brain. 1. Surprise gets our attention by defying our expectations. That’s exactly how a story grabs the brain’s attention: by instantly letting us know that all is not as it seems – yes, beginning with the opening sentence. 2.

Eight Questions To Ask Before You Start A Business Are you thinking of starting a web business? Starting a PPC Management agency? Setting up your own site and selling things, or building a web publishing empire? Before you start, ask yourself the following eight questions. 1 . Define what service the business provides. Try to focus. McDonalds could, no doubt, provide up-market meals, but they focus on selling quick, cheap food. That is what they do. 2. Who are your customers? Create a mental image of your typical customer. 3. What is your unique selling proposition? If your customers can buy the same services for less elsewhere, or more easily, they will. There is a tendency to model yourself on others. This is not to say doing something wildly new or different is any guarantee of success. 4. This point is so important, it really should be number one. Businesses may have great ideas. Then the bank manager calls. The overdraft has hit its limit and you can’t meet payroll this week. There is no fooling cashflow. 5. 6. 7. Set company goals. 8.

6 Leadership Styles, And When You Should Use Them You don’t need an MP3 player, a turntable, or a CD player to listen to Tristan Perich’s new album, Noise Patterns. All you need is a pair of headphones—"not earbuds," says the composer—and a willingness to hear music in noise. The 34-year-old Perich’s compositions push the border between white noise and electronic music, frequently straddling the two as if the static on your old television started emitting a strangely beautiful pattern of sound. But Perich doesn’t just compose music: His music is the instrument itself. Perich, who studied math, music, and computer science at Columbia and received a masters from NYU's fabled hacking-meets-art Interactive Telecommunications Program, has spent the last dozen years of his life exploring the frontiers of one-bit sound, transforming those lines of 1s and 0s into a living art form. "One-bit music is electronic sound that’s created entirely with just on-and-off values," says Perich, who grew up composing music for classical ensembles.

How I Built A Blog To More Than 70,000 Subscribers In 21 Months--FREE According to one source, there are more than 164 million blogs... ...Most of which get less than 1,000 visitors per month, and, for the lack of a better word, are business failures. But I'd like to help you BEAT THE ODDS I'm Derek Halpern, the founder of Social Triggers (a company that produces a blog with more than 70,000 subscribers, a top podcast on iTunes, and a web tv show)... ). ...And I created this free blog building email series where I reveal: Why you MUST start building your blog TODAY The psychology behind why blogs fail The 3 big "time-wasters" most new bloggers squander their time on (and what to do instead) The secret behind getting readers (not just any readers, but readers that buy what you sell) And much more... All you have to do to gain access to this training is enter your name and email in the form to the right, and press "GET INSTANT ACCESS."

5 Ways To Start A Business For Under $1000 We're not trying to pull a lame pick up line on you, but do you come here often? If so, you might like to subscribe to our free articles by email for the freshest stuff sent straight to your inbox. :) In 2004, I started 2 Virtues Inc. to bring my inventions, Swaddleaze and Blankeaze to market. I spent money like a rock star. Out of the gate, I spent: $15,000 on a website with a custom shopping cart that didn’t work$2,000 for a logo that looked more like a Kama Sutra position than a symbol of safe sleepwear for infants.$1,300 on stationery and business cards$2,000 on a merchant account setup and monthly fees$1,000 on PR leads from ProfNet$12,000 on a publicist$17,000 on advertising in Pregnancy Magazine$4,000 on Google AdWords I spent $54,000 and that didn’t even include product manufacturing. A lot has changed since then and Chris Guillebeau’s article titled “The Case for the $100 Business” got me thinking. If I started 2 Virtues now, I’d do things so differently. 1. Cost: $787 2. 4. Cost: $0

Create a Killer Business Plan - Martha Stewart Career and workplace You've got the idea, now package it well! The way you present your company and vision will determine whether you get the right financial partners and the right deal. Marketing Your IdeaLife is marketing. As a former entrepreneur and a start-up consultant today, I've certainly seen more business plans than I care to remember. Make your business plan shine with the three "Cs" to success: Be ConciseA concise plan provides a simple explanation for why the business is a great idea, as well as how it will be executed. Be CompellingThe goal is to make your company appear to be deeply compelling. Be CompleteYou must have a trusted third party review your plan to ensure it addresses all possible issues an investor may have. A Lesson to RememberHere's a sample paragraph from an executive summary I read a while ago: Freight trucks in America travel 30 billion miles empty each year. Wow! Here's how to do it: Do not use a business plan package. You'll also need a financial model.