An editor for academics 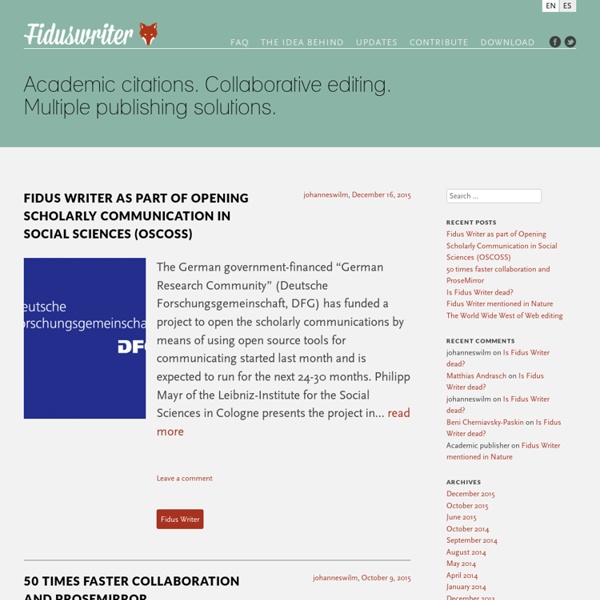 comicado_main Comicado is an easy and lightweight graphic application for creating comics and other illustration works. It combines many standard elements of digital illustration (layers, editable brushes...) with some new concepts like panels based artwork composition, which allows creation of editable comic layouts. Comicado provides tools and artwork elements for various phases of comic creation, from sketching to inking and coloring. Its flexible brush engine is well suited for drawing and painting.

Native American Netroots What is now the state of Nevada was home to American Indian people for several millennia prior to the arrival of the first Europeans in the area. As a part of the Great Basin, Nevada is often seen as being somewhat inhospitable to human habitation. The Great Basin Area includes the high desert regions between the Sierra Nevada and the Rocky Mountains. It is bounded on the north by the Columbia Plateau and on the south by the Colorado Plateau. It includes southern Oregon and Idaho, a small portion of southwestern Montana, western Wyoming, eastern California, all of Nevada and Utah, a portion of northern Arizona, and most of western Colorado.

Massimo Rimondini - Useful downloads This page contains some useful programs I have written. PPspliT is a PowerPoint add-in that splits animation effects into different slides. Its most practical application is when you want to produce a PDF file of a presentation where several different shapes are drawn overlapped (because they are supposed to appear at different times). PPspliT does for you the job of producing a separate slide for each entry/exit/emphasis effect you would apply when the presentation is being actually played. Online tools for researchers Here you will find a list of online “web 2.0″ tools, designed for researchers. The list will be updated progressively as this blogs explores the different services out there. I – Using “the crowd” for research (crowdsourcing, surveys…) II – Scientific Social Networking III – Sharing Science (data, figures, code, samples…) IV – Lab and Research Management Tools V – Producing research (data analysis, writing, publishing) VI – Find expertise VII – Find, organize and discuss papers I – Crowdsoucing Research – New tools specifically designed for crowdsourcing research are developing rapidly. For

13 Google Search Tricks That Make Life A Whole Lot Easier You think you know how to Google? You don’t know how to Google. Even the most seasoned Googler might not know every tip and trick available with just a few extra keystrokes in the search bar. The 11 Best Code Editors Available in 2015 I recently found myself looking for a new text editor for web development. I’m new to development but I wanted to have a tool that I could become familiar with and “grow into” as I improved. Which would doubtless result in my spending a lot more of my time working inside said text editor. Rock Art by Native Americans in Nevada Nevada is a key location for viewing ancient Native American rock art in the form of petroglyphs and pictographs, much of it thousands of years old. Some of the most significant and well - preserved sites in Nevada are in easily - accessible areas. Other important rock art sites are found throughout the southwestern United States. The dry desert climate and sparse population in Nevada have been big factors in preserving these remnants of prehistoric life in the Great Basin. In both northern and southern, there are several rock art sites that are open to the public.

TreeSheets The ultimate replacement for spreadsheets, mind mappers, outliners, PIMs, text editors and small databases. Suitable for any kind of data organization, such as Todo lists, calendars, project management, brainstorming, organizing ideas, planning, requirements gathering, presentation of information, etc. It's like a spreadsheet, immediately familiar, but much more suitable for complex data because it's hierarchical.