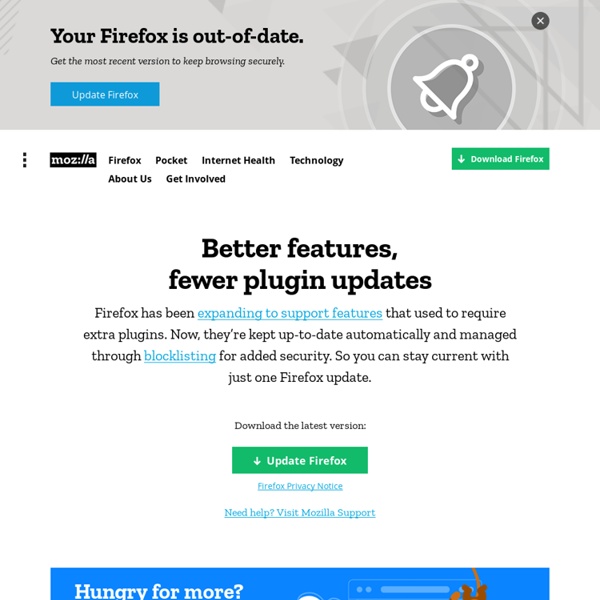 How can Firefox help me? In the future, Firefox will update plugins for you. Until then, you should regularly check this page and update your plugins to stay safe. Which Plugins do I have? We automatically detected your plugins above, to view your installed plugins in Firefox follow these steps: Open the . How do I disable a plugin? In Firefox: Open the . Caution: disabling a plugin means that you will no longer be able to do certain things.

Citrix ICA Client Plugin - Windows ICA Client 10.0Firefox 3.0.5 As others have done, I installed Firefox after I had already installed the Citrix ICA client. The ICA plugin was unavailable, and I would have to download/launch the .ica files manually or through a local file association. The only solution I had seen so far included copying a handful of DLLs from the Citrix ICA client installation directory to the Firefox plugins directory, but I was hesitant to do so. If I ever update/upgrade my local ICA client, I wouldn't want the plugin to be out-of-sync. Instead, register the plugin without having to put copies of DLLs all over the place.

Computing Factorials of a huge number in C/C++: A tutorial - CodeChef Discuss Hello @all, As in MARCH13 contest we needed to use primary school arithmetics once again, and as it is a topic that comes up quite frequentely here in the forums thanks to this problem, and also, as I don't see a complete and detailed tutorial on this topic here, I decided I'd write one before my Lab class at university :P (spending free time with Codechef is always a joy!!) Some preliminary experiences with C If we want to implement a factorial calculator efficientely, we need to know what we are dealing with in the first place... Some experiences in computing factorials iteratively with the following code: #include <stdio.h> long long int factorial(int N) { long long ans = 1; int i; for(i=1; i <= N; i++) ans *= i; return ans; } int main() { int t; for(t=1; t <= 21; t++) { printf("%lld\n", factorial(t)); } return 0; }

14+ YouTube Playlists To Watch & Learn Computer Programming Quickly Since it never hurts to learn something new, especially a skill set like computer programming in different languages, we will go over some of the best channels that will introduce you to the world of programming. Let’s look at which channels made the cut. thenewboston thenewboston is a truly great channel with an immense collection of programming tutorials. The official website contains a list of all the tutorials made so far, which are well into the thousands (about 1500 videos as of this writing). Not only does it have tutorials for various programming languages, but it also has videos on building computers, tutorials for software like Dreamweaver and After Effects, as well as 3D-modeling software.

keyconfig 20110522 keyconfig allows you to change keyboard shortcuts. [Firefox, Thunderbird, SeaMonkey, and any other XULRunner Application] keyconfig adds the ability to create new or modify existing shortcuts defined by a <key> element, but only changing those which itself call a function (those with a command or oncommand attribute) has an effect (all others fulfill only cosmetic purposes it seems and are grayed out). The configuration screen can be accessed via Tools > Keyconfig (in most Applications), the Add-ons Manager, or Ctrl+Shift+F12 (Command+Shift+F12 on MacOS) from the main window.

Android versions comparison The latest version of the platform is now Android 10. Android 8 introduced an Android flavor for low-end devices the Go Edition. It aims devices with low RAM (1GB or less), slow internet connections and lower-end CPU. It comes with popular apps dedicated to this flavor: Gmail Go, Google Go, Maps Go... Customizable Shortcuts for Firefox Lets You Create Key Commands for Anything For the ultimate control use KeyConfig along with Functions for KeyConfig. For example, I have "i" set to start inspecting elements on webpages using Firebug, "t" to open a new tab, "k" to focus search box, "c" to close current tab, "r" to reload, "z" to go back, "x" to go forward, "a" to switch to prev tag, "s" to switch to next tag, "v" to view page source, "u" to copy current page URL, "p" to open Page Info view (for easy downloading of images when needed), "d" to open up add to delicious dialog etc.

How to Become a World Class Computer Engineer : NextBigWhat.com [There is a difference between engineers and software developers; and here is a guest post by Abhishek on what does it take to become a world class engineer.] Reasons for writing this post: I feel I have not done enough to become a good computer engineer.First reason is may be I did not have someone who can guide me properly. We were the second only batch of Computer Engineering at Nirma Institute of Technology, Ahmedabad, so no person was in the industry at that time from our college. Second reason, may be we were not mature enough. Third reason, 3 Idiots was not released at that time :)