Pentagon admits suffering major cyber attack in March. 15 July 2011Last updated at 00:01 The deputy defence secretary said future cyber attacks could even cause deaths The Pentagon has admitted it suffered a major cyber attack in which thousands of files were taken by foreign hackers. Deputy Defence Secretary William Lynn said that in a March attack and other breaches, hackers had taken information on "our most sensitive systems". The admission came as the Pentagon rolled out a strategy for strengthening US cyber capabilities and addressing threats and attacks in cyberspace. The plan would treat cyberspace in a similar manner to land, air and sea. "In the 21st Century, bits and bytes can be as threatening as bullets and bombs," Mr Lynn said, unveiling the plan. In a speech at National Defense University in Washington, Mr Lynn said about 24,000 files containing Pentagon data were stolen from a defence industry computer network in March, marking one of the largest cyber attacks in US history. 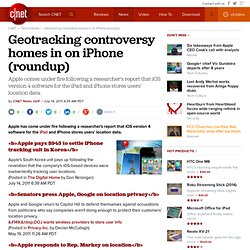 &#149;&nbsp;DOJ wants wireless providers to store user info (Posted in Privacy Inc. by Declan McCullagh)May 19, 2011 11:26 AM PDT <b>Apple responds to Rep. Apple has responded to a letter from U.S. <b>Congressman wants FTC probe of iPhone tracking</b> Apple's explanation for location tracking, and promise of a fix, doesn't satisfy Rep. Rep. <b>Sen. I Flunked My Social Media Background Check. Will You? Over 140,000 Children Victims of Identity Fraud Yearly. For most people, the thought of their children being victims of identity fraud is even more chilling than being a victim themselves. While children are less at risk for identity fraud than adults, when it happens it can be much more devastating because the fraudulent activity can go undetected for years, making it all that much harder to restore the victim's good name. A new ID: A Labs study from ID Analytics found that a startling 140,000 identity frauds are perpetrated on minors each year.

In addition to the rate of child identity fraud, the study also found: Credit card and wireless activity most common—60 percent of the potential fraudulent identity use alerts sent to minors originated from the credit card industry. The vast majority of the remaining alerts were from the telecommunications industry, mostly wireless providers. "Child identity fraud poses complex challenges to consumers, businesses and regulators. Children’s Book Uses iPad Interactivity to Teach Open Mindedness. When artist Raghava KK had two children, he decided it was time for a new approach to children’s books. 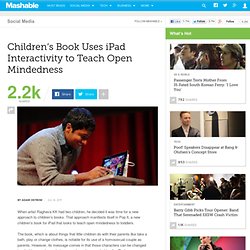 That approach manifests itself in Pop It, a new children’s book for iPad that looks to teach open mindedness to toddlers. The book, which is about things that little children do with their parents like take a bath, play or change clothes, is notable for its use of a homosexual couple as parents. However, its message comes in that those characters can be changed to a lesbian couple or a heterosexual couple upon shaking the iPad. “It’s a metaphor for shaking from one perspective to another,” said Raghava in an interview with Mashable. “The relationship between parent and child does not change if they have two moms, two dads. In creating the book, Raghava did testing with children, analyzing how much time they spent with each page and ultimately using that data to determine which pages to put in the book.