10 must-have SketchUp plug-ins. Google has always prided itself on the simplicity of SketchUp’s toolset. 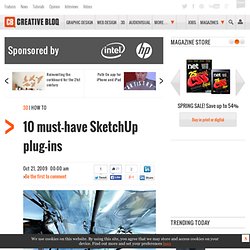 In fact, the last new tool to be introduced to the standard set was the Follow Me tool, which came in with version 4.0 (we’re now on 7.0) and added the capability to extrude profiles along paths. But version 4.0 also saw the introduction of the Ruby scripting interface. This enabled anyone with scripting skills to write plug-ins for SketchUp to extend its core functionality, and that’s exactly what users did – in their thousands. We’ve sifted through the add-ons currently available to bring you our list of the 10 most vital plug-ins. While it’s still perfectly possible to build complex structures using the standard SketchUp toolset, sometimes it’s nice to have helpers to take a little of the load off you.

Some of these plug-ins automate tasks that would take a fair bit of planning and desk time, while others add capabilities that would simply not be achievable using the base toolbox. 01. 02. 03. 04. 05. 06. 07. BuildEdge. 30-DAY Moneyback GUARANTEE All we ever wanted was a way to model a building without huge complicated CAD software. 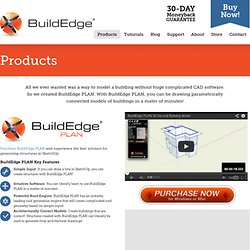 So we created BuildEdge PLAN. With BuildEdge PLAN, you can be drawing parametrically connected models of buildings in a mater of minutes! Purchase BuildEdge PLAN and experience the best solution for generating structures in SketchUp. BuildEdge PLAN Key Features. 10 Things About SketchUp. Kitchen design plugin released! It’s finally here! 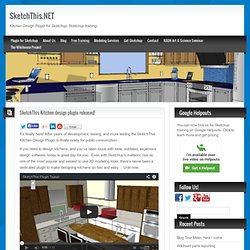 After years of development, testing, and more testing the SketchThis Kitchen Design Plugin is finally ready for public consumption. If you need to design kitchens, and you’ve been stuck with slow, outdated, expensive design software, today is great day for you. Even with Sketchup’s meteoric rise as one of the most popular and easiest to use 3D modeling tools, there’s never been a dedicated plugin to make designing kitchens so fast and easy… Until now… This plugin features an incredibly flexible library of Dynamic Components built by kitchen designers, for kitchen designers. In addition to that you’ll find a growing materials library, Shaderlight enabled lights for rendering, and a host of help videos. Speaking of the cloud, every aspect of this plugin is hosted in the cloud. The plugin runs on any version of Sketchup 8 or later. SketchUp to LayOut Book. WWX Mortise & Tenon Plugin for Sketchup - wudworx. 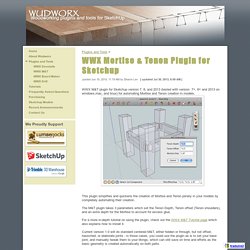 This plugin simplifies and quickens the creation of Mortise and Tenon joinery in your models by completely automating their creation. The M&T plugin takes 3 parameters which set the Tenon Depth, Tenon offset (Tenon shoulders), and an extra depth for the Mortise to account for excess glue. For a more in-depth tutorial on using the plugin, check out the WWX M&T Tutorial page which also explains how to install it. Current version 1.0 will do standard centered M&T, either hidden or through, but not offset, haunched, or elaborate joints - in those cases, you could use the plugin as is to set your base joint, and manually tweak them to your likings, which can still save on time and efforts as the basic geometry is created automatically on both parts.