Millennial Dads Turn to Digital in Their Moments of Need. Good news for moms and marketers: The new generation of millennial dads is playing a big role at home. 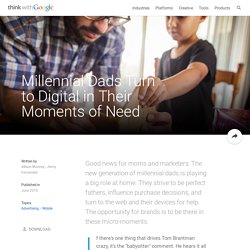 They strive to be perfect fathers, influence purchase decisions, and turn to the web and their devices for help. The opportunity for brands is to be there in these micro-moments. Written by Allison Mooney , Jenny Fernandez Published in June 2015 Topics If there's one thing that drives Tom Brantman crazy, it's the "babysitter" comment. Across the U.S., men like Tom are becoming much more involved in raising their children. "Millennial dads are more involved in the day-to-day of childcare than any generation before them," says Julie Michaelson, head of global sales at BabyCenter, a site for new and expecting parents. 88% of millennial dads feel it's at least somewhat important to be the 'perfect dad,' a higher percentage than millennial moms.

Rising expectations lead millennial dads online These rising expectations are leading to a lot of anxiety for new dads. Related Story. Good Egg Safety - Safety advice for families. Child Safety, Young drivers, Older people, In the home and road safety ... I-Size (@isizeorg) Child Seat Safety (@carseatladies) The Britax King II ATS - the intelligent car seat. This clever invention is full of the latest technology to keep your little one safe in the car, including a tip-forward feature to make it easier to secure using the seat belt. A new development in the world of group 1 car seats has seen the launch of the Britax King II ATS. This clever car seat monitors the tension of the harness. It features a green light and sound alert to let you know if it’s fitted correctly and tight enough. This is really useful, as toddlers can often wriggle around when you strap them in a car seat, so the harness isn’t always as tight as it should be. Discover the winners of the M&B Awards Best Pushchairs & Car Seats 2015 The Britax King II ATS also features an Active Tensioning System, which automatically adjusts the harness to maintain the right tension for the whole journey.

The Britax King II ATS is priced at £180, exclusive to Mothercare - available in stores. Smart Car Seat Alerts Parents of Danger. <div>You must enable Javascript to watch this video! 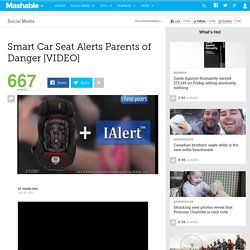 </div> Keeping babies and toddlers safe is a top priority for driving parents. TOMY International is unveiling a new car seat that will send cellphone alerts when the car seat is installed improperly, if the child becomes unbuckled and when a child is accidentally left behind. The smartphone-connected car seat is called The First Years Convertible Car Seat with iAlert. It's designed to help parents avoid auto-related disasters that claim the lives of thousands of children every year.

In car child safety - Common car seats mistakes - Choosing a child car seat - Child car seat reviews - Baby transport - Which? Baby & child. Many parents get confused about child car seats - make sure you're not one Are you up to speed on how to fit a baby or child car seat properly and in the know about the laws you need to follow? 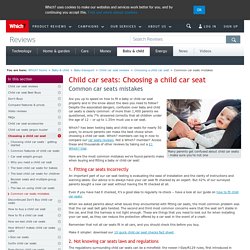 Despite the associated dangers, confusion over baby and child car seats is clearly common: of more than 1,400 parents we questioned, only 7% answered correctly that all children under the age of 12 – or up to 1.35m must use a car seat. Which? How child safety seat is made - manufacture, history, used, parts, components, product, industry, History, Raw Materials. Background In the United States, more than 2,000 children under 14 years of age die each year in vehicle crashes. Not only are vehicle crashes the leading killers of children, in 1997 they also injured nearly 320,000 youngsters. Most of the fatalities happen because the children aren't secured in specially designed car seats. Instead, they are strapped in the wrong kinds of seats, such as adult seats that neither position the children's bodies properly nor cushion them against impact, or they aren't wearing any restraints at all. Children aged four to 14 are least likely to be restrained properly. I-Size is the new European-wide standard for child car seats. I-Size (@isizeorg) Child Seat Safety (@carseatladies) Parents warned as 31 babies killed by car seats. Baby Lochlan Richards tragically died in a car seat Because their airways are still developing, young infants are at risk of suffocation when their bodies become scrunched up, making it hard for them to breathe. 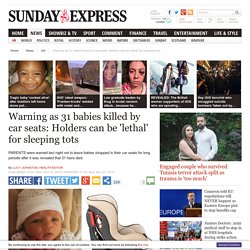 Of the 31 children aged two or under, 15 suffocated while the rest were strangled by the seat’s straps, a study found. The Lullaby Trust, which is dedicated to preventing sudden infant deaths, is to issue new guidance advising parents to ensure babies are supervised when in car seats and not left in them for extended periods. It called last night for more research into the issue.

The trust’s scientific adviser, Justin Daniels, a consultant paediatrician at North Middlesex University Hospital, said: “Car seats are desperately important to save lives from car accidents. “Small babies do not have the ability to support their heads and this study shows being upright in a seat is a risky position for a long period of time.”

Volvo Unveils Inflatable Child Car Seat – Would You Use It? Gone are the days when you’re stuck without a car seat and need to get your tot somewhere. 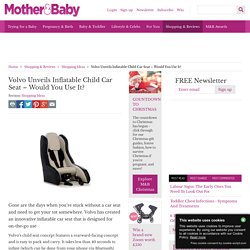 Volvo has created an innovative inflatable car seat that is designed for on-the-go use Volvo’s child seat concept features a rearward-facing concept and is easy to pack and carry. It takes less than 40 seconds to inflate (which can be done from your phone via Bluetooth) and weighs less than 5 kg – half the weight of the usual car seat. 2015 Volvo S60 Child Seat Review. Volvo Unveils Inflatable Child Car Seat – Would You Use It?