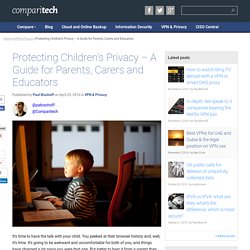 You peeked at their browser history and, well, it’s time. It’s going to be awkward and uncomfortable for both of you, and things have changed a lot since you were that age. But better to hear it from a parent than learn it from a stranger or God-knows-who online. No, not that talk. Won’t the internet and government regulate this for me? Haha. Because we all know how honest people are when asked their age before entering a website. At least, that’s what the forward-thinking legislators that drew up the 2000 Children’s Online Privacy Protection Act thought. Safety tips for parents. Esafety & in-app purchases - iClevedon. Thanks to the many parents who have attended the various ‘Meet Your iPad’ sessions. 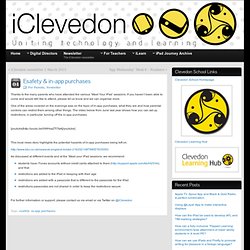 If you haven’t been able to come and would still like to attend, please let us know and we can organise more. One of the areas covered on the evenings was on the topic of in-app purchases, what they are and how parental controls can restrict them among other things. The video below from June last year shows how you can set up restrictions, in particular, turning off the in-app purchases. [youtube] This local news story highlights the potential hazards of in-app purchases being left on. As discussed at different events and at the ‘Meet your iPad sessions, we recommend: students have iTunes accounts without credit cards attached to them ( and thatrestrictions are added to the iPad in keeping with their agerestrictions are added with a passcode that is different to the passcode for the iPadrestrictions passcodes are not shared in order to keep the restrictions secure. eSafety for Mobile Devices. Around half of parents do not use internet controls or filtering software 13 per cent of parents of children aged 5–15 have not heard of such controls.• Parents are even less aware of safeguarding controls for mobile phones and games consoles.• While children are generally aware of how they should behave to stay safe online, they often do not use these strategies. 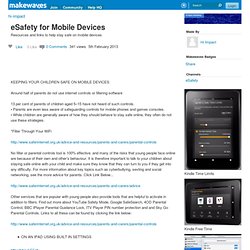 *Filter Through Your WiFi No filter or parental controls tool is 100% effective, and many of the risks that young people face online are because of their own and other’s behaviour. Mounts-bay.cornwall.sch.uk/wp-content/uploads/2012/10/eSafety-for-Parents.pdf. Www.saferinternet.org.uk/ufiles/Facebook-checklist-Aug2013.pdf. Internet Safety Training for Parents and Families. It’s been a long day. 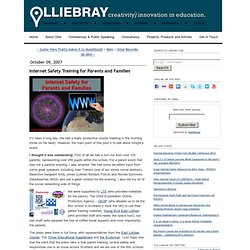 We had a really productive cluster meeting in the morning (more on his later). However, the main point of this post it to talk about tonight’s event. I thought it was outstanding. First of all we had a turn out from over 100 parents, representing over 250 pupils within the school. For a parent event that was not a parents evening, I was amazed. We were supported by LTS (who provided materials for the packs), The Child Exploitation Online Protection Agency – CEOP (who allowed us to be the first school in Scotland [I think the UK] to use their parent training material), Young Scot East Lothian (who provided staff and nearly the space bus!)

The press were there in full force, with representatives from the East Lothian Courier, The Times Educational Supplement and the Scotsman. Thinkuknow - home. The CEOP Command’s Thinkuknow programme provides resources, training and support for professionals who work directly with children and young people. 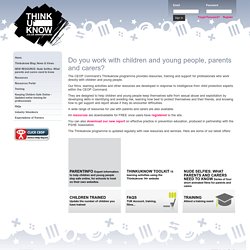 Our films, learning activities and other resources are developed in response to intelligence from child protection experts within the CEOP Command. Chatdanger - how to keep SAFE while chatting online. Young people and social networking sites. The new Ofsted e-safety framework: is your school ready? From this September, Ofsted has issued new guidelines in regards to e-safety provision in schools. 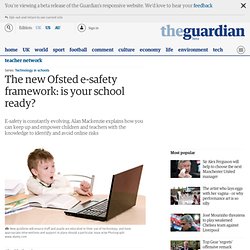 This basically means that during an inspection, Ofsted will be on the look out for how the school protects and educates staff and pupils in its use of technology, and what measures the school has in place to intervene and support should a particular issue arise. As the framework is concerned with safeguarding pupils, it has to be a top priority for schools. Many schools might already have effective policies and systems in place, but those who haven't will need to revise their priorities to make sure this features. Www.wisekids.org.uk/BECTA Publications/esafety.pdf. eSafety Training and Consultancy for Schools. Thinkuknow - home. How to teach … esafety and digital citizenship.

In recent weeks, the problem of safe and appropriate use of the internet, and specifically social networking sites, has been brought to the fore. 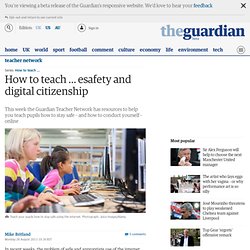 There has been the high-profile incident involving Stella Creasy MP and the feminist campaigner Caroline Criado-Perez, who both received death and rape threats due to their campaign on Twitter supporting women who highlight online abuse. There has also been the tragic suicide of Hannah Smith, who took her own life as a result of the bullying she suffered online through the ask.fm website. As such, esafety goes beyond staying safe, it's also about how you conduct yourself online – digital citizenship. The importance of esafety and digital citizenship for schools is a significant one; the provision of which will be inspected when Ofsted comes knocking at the door. Therefore, it is essential that schools find interesting and engaging ways in which to deliver what can be repetitive but vital information to students of all ages.