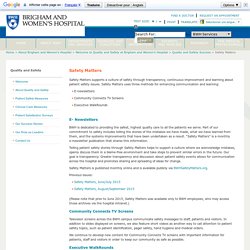 Safety Matters uses three methods for enhancing communication and learning: E-newslettersCommunity Connects TV ScreensExecutive WalkRounds E- Newsletters BWH is dedicated to providing the safest, highest quality care to all the patients we serve. Part of our commitment to safety includes telling the stories of the mistakes we have made, what we have learned from them, and the systems improvements that have been undertaken as a result. Telling patient safety stories through Safety Matters helps to support a culture where we acknowledge mistakes, openly discuss them in a blame-free environment and take steps to prevent similar errors in the future. Safety Matters is published monthly online and is available publicly via BWHSafetyMatters.org. Previous issues: Community Connects TV Screens Executive WalkRounds. 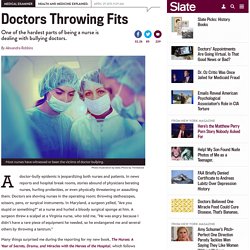 Photo by Thinkstock A doctor-bully epidemic is jeopardizing both nurses and patients. In news reports and hospital break rooms, stories abound of physicians berating nurses, hurling profanities, or even physically threatening or assaulting them. Doctors are shoving nurses in the operating room; throwing stethoscopes, scissors, pens, or surgical instruments. In Maryland, a surgeon yelled, “Are you stupid or something?” Many things surprised me during the reporting for my new book, The Nurses: A Year of Secrets, Drama, and Miracles with the Heroes of the Hospital, which follows the stories of four nurses and is based on interviews with hundreds of other nurses across the country. Why is doctor bullying veiled in organizational silence? These fears may be justified. A nurse relayed this scenario to the Journal of the American College of Surgeons, for example: “Cardiologist upset by phone calls and refused to come in.

The hierarchy is often enforced from above. Ensuring Nothing's Left Behind in a Patient. Hospitals Zero In On Drug-Resistant Infections as Pressure Builds - Health Blog. By Laura Landro Baycrest, Toronto Hospitals are beefing up hygiene amid growing recognition that drug-resistant organisms can lurk on the most common surfaces, as WSJ’s Informed Patient column reports today. 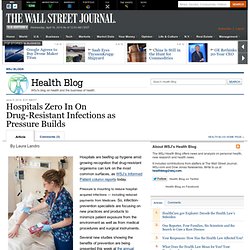 Pressure is mounting to reduce hospital-acquired infections — including reduced payments from Medicare. So, infection-prevention specialists are focusing on new practices and products to minimize patient exposure from the environment as well as from medical procedures and surgical instruments. Several new studies showing the benefits of prevention are being presented this week at the annual meeting of the Association for Professionals in Infection Control and Epidemiology, known as APIC, in San Antonio, Texas. Chingiz Amitov, director of infection control and prevention, tells the Health Blog that the results were so encouraging that the small unit’s methods have become standard practice and Baycrest is considering expanding the practice to other floors. Hospitals Move to Contain Deadly Infections. A Different Kind of Checklist for Hospitals - Health Blog. By Laura Landro iStockphoto Hospitals have checklists galore these days — step-by-step-guidelines to prevent infection, avoid re-admissions, reduce surgical complications and make sure babies and mothers aren’t harmed during delivery. 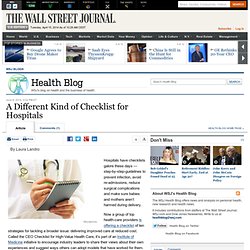 Now a group of top health-care providers is offering a checklist of ten strategies for tackling a broader issue: delivering improved care at reduced cost. Called the CEO Checklist for High-Value Health Care, it’s part of an Institute of Medicine initiative to encourage industry leaders to share their views about their own experiences and suggest ways others can adopt models that have worked for them. Unlike the specific tasks on checklists used in medicine, these are fairly broad, such as having senior leadership that is “committed, visible and determined,” and having “safeguards to reduce injury and infection.” “It’s a mechanism people can use at different levels to assess where they are at,” she says.

Cutting the Cost of Cacophony in Hospitals - Health Blog. By Jie Jenny Zou iStockphoto A noisy hospital does more than just annoy patients; it may also potentially hamper recovery — according to a new study on sleep disruption published in the Annals of Internal Medicine. 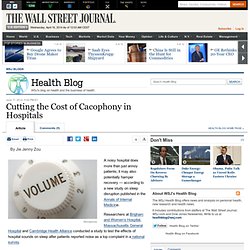 Researchers at Brigham and Women’s Hospital, Massachusetts General Hospital and Cambridge Health Alliance conducted a study to test the effects of hospital sounds on sleep after patients reported noise as a top complaint in a national survey. “Previous studies have looked at a tone or two, but never all of them in one study,” says Dr.

Orfeu M. Healthy study participants in a sleep lab, not hospital patients, were exposed to recordings of typical sounds a patient might hear while trying to sleep, including external noise such as street traffic and hospital-specific sounds such as nurses talking or ice machines down the hall. Unsurprisingly, the study found that the louder the noise was, the more likely it would be to wake someone up. After all, as Dr.