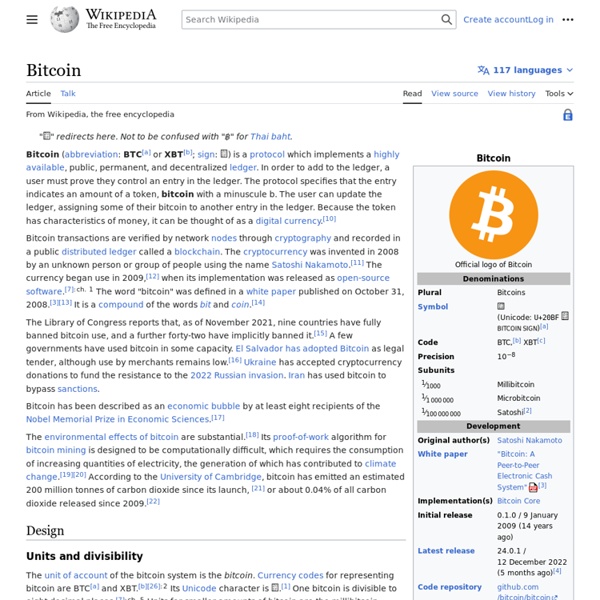 decentralized cryptocurrency Bitcoin (₿) is a cryptocurrency, a form of electronic cash. It is a decentralized digital currency without a central bank or single administrator that can be sent from user to user on the peer-to-peer bitcoin network without the need for intermediaries.[8] Bitcoin has been criticized for its use in illegal transactions, its high electricity consumption, price volatility, thefts from exchanges, and the possibility that bitcoin is an economic bubble.[14] Bitcoin has also been used as an investment, although several regulatory agencies have issued investor alerts about bitcoin.[15] History Creation On 3 January 2009, the bitcoin network was created when Nakamoto mined the first block of the chain, known as the genesis block.[20][21] Embedded in the coinbase of this block was the following text: "The Times 03/Jan/2009 Chancellor on brink of second bailout for banks In 2011, the price started at $0.30 per bitcoin, growing to $5.27 for the year. Design Units Blockchain

wikipedia, History of Bitcoin The price of a bitcoin reached previous all-time high of US$1124.76 on 29 November 2013, up from just US$13.36 on 5 January at the start of the year; the price subsequently dropped into the $700 range. Bitcoin is the first cryptocurrency, a form of money that uses cryptography to control its creation and management, rather than relying on central authorities.[1] However, not all of the technologies and concepts that make up Bitcoin are new; the presumed pseudonym Satoshi Nakamoto (the creator of Bitcoin, see below) integrated many existing ideas from the cypherpunk community when creating Bitcoin. Pre-history[edit] Independently and at around the same time Wei Dai proposed b-money [3] and Nick Szabo proposed bit-gold.[4] Subsequently Hal Finney implemented and deployed RPOW a reusable form of hashcash based on IBM secure TPM hardware and remote attestation (centralized but with no issuer inflation risk). Creation[edit] Growth[edit]

Beginners Guide to Mining Bitcoins Last updated on December 18th, 2017 at 06:06 pm One of the biggest problems I ran into when I was looking to start mining Bitcoin for investment and profit was most of the sites were written for the advanced user. I am not a professional coder, I have no experience with Ubuntu, Linux and minimal experience with Mac. So, this is for the individual or group that wants to get started the easy way. The Beginners Guide To Bitcoin – Everything You Need To Know - Monetarism - A UK Money and Personal Finance Blog In February 2013, version 0.8.0 of Bitcoin was released. This virtual payments system is the financial equivalent of Latin, the language with no native speakers. In the case of Bitcoin, though, what you are dealing with is a financial structure with no central bank, no one regulatory body as such, and no physical form. That may sound odd – so let’s look in more detail at Bitcoin, how it works, and what its future might be.

wikipedia, Satoshi Nakamoto Satoshi Nakamoto (中本 哲史[1], Nakamoto Satoshi?) is a person or group of persons who created the Bitcoin protocol and reference software, Bitcoin Core. In 2008, Nakamoto published a paper[2][3] on The Cryptography Mailing list at metzdowd.com[4] describing the Bitcoin digital currency. In 2009, he released the first Bitcoin software that launched the network and the first units of the Bitcoin currency, called bitcoins.[5][6] Nakamoto is said to have continued to contribute to his Bitcoin software release with other developers until contact with his team and the community gradually began to fade in mid-2010. Near this time, he handed over control of the source code repository and alert key functions of the software to Gavin Andresen.[7] Also around this same time, he handed over control of the Bitcoin.org domain and several other domains to various prominent members of the Bitcoin community.

10 Search Engines to Explore the Invisible Web Not everything on the web will show up in a list of search results on Google or Bing; there are lots of places that their web crawlers cannot access. To explore the invisible web, you need to use specialist search engines. Here are our top 12 services to perform a deep internet search.

wikipedia, Bitcoin protocol The Bitcoin network is a peer-to-peer payment network that operates on a cryptographic protocol. Users send bitcoins, the unit of currency, by broadcasting digitally signed messages to the network using Bitcoin wallet software. Transactions are recorded into a distributed public database known as the block chain, with consensus achieved by a proof-of-work system called "mining". The block chain is distributed internationally using peer-to-peer filesharing technology similar to BitTorrent. The protocol was designed in 2008 and released in 2009 as open source software by "Satoshi Nakamoto", the pseudonym of the original developer or group of developers. The network timestamps transactions by including them in blocks that form an ongoing chain called the block chain.

Bitcoin 2.0 Explained: Colored Coins Vs Mastercoin Vs Open Transactions Vs Protoshares While the entire world is beginning to learn about the power of the Bitcoin payment network, the real innovation behind this protocol is happening behind the scenes. There have been many different Bitcoin enthusiasts who have been talking about the holy grail of decentralized exchanges and using the Bitcoin protocol for more than just payments, and it seems that 2014 is going to be the year when we see these features finally get implemented into some real world applications. There are many different projects that are currently aiming to take Bitcoin to the next level, and it's likely that there won't be one clear winner when everything is said and done.

Satoshi Nakamoto, bitcoin.it Satoshi Nakamoto is the pseudonymous person or group of people who designed and created the original Bitcoin software, currently known as Bitcoin-Qt. His involvement in the original Bitcoin software does not appear to extend past mid-2010. Identity There are no records of Nakamoto's identity or identities prior to the creation of Bitcoin. On his P2P foundation profile, Nakamoto claimed to be an individual male at the age of 37 and living in Japan, which was met with great skepticism due to his use of English and his Bitcoin software not being documented nor labeled in Japanese.

bitcoin.it, Contracts A distributed contract is a method of using Bitcoin to form agreements with people via the block chain. Contracts don't make anything possible that was previously impossible, but rather, they allow you to solve common problems in a way that minimizes trust. Minimal trust often makes things more convenient by allowing human judgements to be taken out of the loop, thus allowing complete automation. By building low trust protocols that interact with Bitcoin, entirely new products can be created: Smart property is property that can be atomically traded and loaned via the block chain. wikipedia: Remittance A remittance is a transfer of money by a foreign worker to an individual in his or her home country. Money sent home by migrants competes with international aid as some of the largest financial inflows to developing countries. In 2012, according to the World Bank Report, $401 billion went to developing countries (a new record) with overall global remittances at $514 billion.[1] The economic impact remains contested among researchers,[2][3] however, remittance transfers do draw people towards the financial services that are available to them.[citation needed]

Bitcoin for Undergrads, Wall Street’s Next Pump-and-Dump The story was everywhere last week: MIT undergraduates will each receive $100 in Bitcoin when they arrive on campus next fall. The gift comes thanks to an affluent donor and two precocious student entrepreneurs — one a sophomore computer science major, the other a first-year Sloan MBA student and president of the MIT Bitcoin Club. I exaggerate slightly when I say the story was everywhere. As far as I know, Foreign Affairs hasn’t yet picked it up.