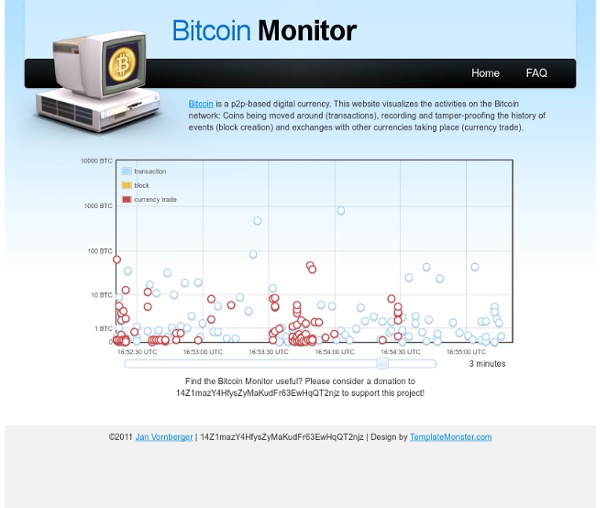 Login Area Friday, August 5th, 2011 From the desk of Tom Williams, operator of MyBitcoin.com For immediate release. After careful analysis of the intrusion we have concluded that the software that waited for Bitcoin confirmations was far too lenient. An unknown attacker was able to forge Bitcoin deposits via the Shopping Cart Interface (SCI) and withdraw confirmed/older Bitcoins. It appears to be human error combined with a misunderstanding of how Bitcoin secures transactions into the next block. In hindsight we should have credited deposits after one confirmation so they would show up in the transaction history, and held the deposit until it reached at least 3 confirmations. We are in the process of building a claim procedure for the remainder of the holdings now. The claim process will consist of a online form where the claimant will be required to enter their MyBitcoin username and password. Tom Williams

Mt Gox - Bitcoin Exchange Digital Black Friday: First Bitcoin "Depression" Hits Much like the New York Stock Exchange, Bitcoin exchanges have suffered from their first massive loss -- a virtual "Black Friday", so to speak. (Source: Google Images) Some say Bitcoins could make buying illegal drugs easier. However, in reality Bitcoins are far from "untraceable". (Source: YouTube/Beardo/Dirt Nasty) Mt. Currency experiences massive inflation in a single day, markets stay open The day was October 28, 1929 and the sky was falling. Today modern exchanges automatically close to prevent such catastrophic sell offs. I. This Friday the New York Stock Exchange (NYSE) was hammered, losing 172.45 points (approximately a 1.4 percent dip) to close below 12,000 for the first time since March 18, 2011 -- nearly three months ago. But as bad a day as Friday was for NYSE traders, it was far worse for those who invested in an increasingly popular digital currency -- Bitcoins (BTC). But, wait let's not get ahead of ourselves. Well, today on Mt. 1. II. III. IV. V.

Bitcoin News Network: Kevin Day Makes Show Of Good Faith In the recent controversy surrounding Mt. Gox and the major security breach they (and the entire Bitcoin community) experienced, the Bitcoin community seems to be in civil dispute about what should happen to the 643 BTC that Kevin Day acquired at a ludicrous rate of 0.0101 USD on Sunday, night of the Bitcoin hackcrash. Community members seem to be trying to burn Kevin at the stake, questioning his actions and morals, some even claiming him to actually be the Mt. Gox perpetrator. In order to clear his name, Kevin Day (Bitcoin Forum Username: toasty) has put the bounty of Bitcoin in escrow at ClearCoin to be donated to the Bitcoin Faucet after thirty days if the whole sticky mess surrounding the scandal at Mt. Read more about Kevin's decision in his official announcement at the Bitcoin forums.

The dramatic fall of BitCoin: No end in sight We’ve discussed BitCoin at some length on Memeburn, including how it works, its potential downfalls, and its genuine merits. BitCoin has experienced its ups and downs in the few years that it has emerged as an online currency. Last year, a major ‘pick-pocketing’ scandal when an anonymous BitCoin user claimed that thieves had managed to steal nearly US$ 500 000 worth of BitCoin. Although the case was unverified, a series of similar incidents caused the BitCoin exchange rate to crash at the time. This year, a number of new attacks on BitCoin have raised further concerns for the online currency. Proponents of the online currency claim that there is no fault with the currency itself. While BitCoin proponents fight hard against any critique of the economic viability of the currency (see comments), some more serious technical challenges are slowly emerging that may not bode well for BitCoin’s long-term survival.

Virgin Galactic to accept bitcoin: Branson Branson did the interview from his private island in the Caribbean, Necker Island, where the rebuilding project of his luxury home is now complete. The previous one burned down two years ago. "It's rebuilt. Before the CNBC interview, Branson tweeted: Many bitcoin users are the type of people who will buy tickets for space travel, Branson told CNBC via a Skype video connection with a cellphone for audio pressed to his ear. "I think the fact that there's going to be a limited number of bitcoins out there and it will ultimately be capped—unlike normal currencies where governments can print more currencies—gives it a sense of security," he said, but acknowledged the risk. For bitcoin's latest price, (click here.)

There's Now A Crowdfunded 'Assassination Market' In Which People Pay Bitcoins To Have Public Figures Killed The more we learn about Bitcoin, the more it seems like it was designed exclusively for criminals. And now it seems that Silk Road creator Ross Ulbricht isn’t the only one who has turned to the digital currency to finance murders. According to Forbes, an anarchist who goes by the pseudonym Kuwakatake Sanjuro has created a crowdfunding service that lets people anonymously contribute Bitcoin towards the assassination of government officials. In the four months in which Assassination Market has been online, six targets have been submitted, including NSA director Keith Alexander, Federal Reserve chairman Ben Bernanke and President Barack Obama. 124.14 bitcoins – the largest current bounty on the site – was offered for Bernanke, most likely because he is considered the greatest threat to Bitcoin’s survival. At Bitcoin’s rising exchange rate, that amounts to almost $75,000 for Bernanke’s killer. He says Assassination Market’s sole purpose is to destroy “all governments, everywhere.”

This is what people in 9 emerging markets think about Bitcoin (survey) | VentureBeat | Business | by Rebecca Grant Bitcoin took us on a wild ride this year — it saw highs and lows, attracting both heady optimism and angry tirades from skeptics. Most of the action happened in established tech markets in the U.S., Europe, China, and Japan, but the greatest implications could be for the developing world. Jana is a mobile platform that connects brands with consumers in emerging markets. When asked “have you ever heard of Bitcoin before today,” 48% of Indonesian respondents said yes, followed by 45% in Vietnam, and 34% in the Philippines — all Asian countries. 58% of all respondents said they would “feel comfortable” investing in virtual currency. Bitcoin is highly volatile — it soared from under $10 to over $1,200 over the course of the year, with various ebbs and flows. One of Bitcoin’s biggest selling points is how cheap and easy it is to transfer money. Adam Draper, who runs a Bitcoin-oriented accelerator program, said that Bitcoin is still more of an asset than a currency.

Hawala: The Working Man’s Bitcoin An Afghan money broker, or hawaladar, in Kabul. Source: NPR It’s an alternative monetary system that operates largely outside government control, avoids large transaction fees by circumventing banks, and has associations with money laundering and the illegal drug trade. No, it’s not Bitcoin, the digital currency beloved of libertarians and bankers, cypherpunks and Silicon Valley developers, and the buyers and sellers of illegal drugs on the Silk Road marketplace. It’s hawala, an informal money transfer system popular in the Middle East, North Africa, and South Asia that dates back to the Middle Ages. Hawala is not a currency like Bitcoin. While its advocates believe that Bitcoin is a technological leap forward, in many ways its dynamics resemble a return to our hawala-like, pre-banking past. Finance on a Diet The promise of Bitcoin and appeal of the hawala system is attributable to a simple fact: the traditional finance sector is expensive. Bitcoin and hawala can do better.

The Bitcoin Model for Crowdfunding Bitcoin is not just a protocol or money, it’s a new business model for Open Source Software. Prior to Bitcoin, you had to raise money, write software, distribute your product, build a business model, and work towards liquidity. Angels, VCs, salespeople and bankers guided you the entire way, through a maze of tolls and controls. The Bitcoin model for crowdfunding dispenses with everything except the software: Write software to power a completely distributed network in which any node can participate anonymously.Allocate scarce resources in the network using a scarce token – an “Appcoin”. This is true crowdfunding – get funded by your users in proportion to their usage. In economics, the artificially scarce token used to allocate scarce resources is called “money.” The Tor network is slow because it relies on volunteers to relay traffic. Can we just use Bitcoin instead of Torcoin? What else can we allocate in a network? Bitcoin is more than money, and more than a protocol.

The MtGox 500 Bitcoin: what happens when the miners pack up their gear? Radar has a backchannel, and sometimes we have interesting conversations on it. Mike Loukides and I recently had a long chat about bitcoin. Both of us were thinking out loud and learning as we went along, and on re-reading the thread I’m astonished by our advanced level of ignorance. Anyway, we’re not going to publish it. However, some of the things we were wondering about are worth wondering about publicly. If you read around the web, the typical answer to that question sounds something like, “Yeah, of course they will. Well, they don’t now. Before I get to the question posed in the title of this piece, we probably need a brief explainer so the rest of what I say has a chance of making sense. Bitcoin’s central feature is a distributed ledger called the block chain that contains a record of every verified transaction ever, going back to the “genesis block” of the first 50 bitcoins. Every bitcoin in existence can be traced back to one of these blocks. Weird right?

What Smart Contracts Need to Learn - Lawbitrage One of the great promises of cryptocurrency networks such as those underlying Bitcoin and Ripple is that they will allow for the creation of a wide variety of economic applications that go far beyond transferring digital money. The "internet of money" refers to the capability of decentralized ledger networks to create unique types of transactions not involving banks, courts, and other traditional players. Smart contracts are a potentially revolutionary type of application using decentralized ledger networks. The idea underlying smart contracts is that software can automate much of the contracting process. This could allow for the performance and enforcement of contractual promises without human involvement. The potential to greatly reduce or even eliminate the need for litigation and courts may be the most attractive feature of smart contracts. Smart contracts could therefore reduce the need for litigators, judges, and arbitrators. Smart Contracts in Development

BitPay: Microsoft Has Aggressive Global Vision for Bitcoin "Our industry does not respect tradition – it only respects innovation." It was with those words that Microsoft CEO Satya Nadella sought to prepare his team for fiscal year 2015, the remarks following a lengthy period of decline in prestige for the global brand as it fell out of step with reigning tech giants like Facebook and Google. To BitPay chief commercial officer Sonny Singh, Microsoft's decision to embrace bitcoin is part of the company's campaign to change this perception. While the Washington-based company has only added bitcoin as a payment option for US digital goods consumers, Singh suggested Microsoft is already preparing to move aggressively to support the emerging technology. Singh told CoinDesk: "Microsoft has a long-term vision for bitcoin, BitPay and the blockchain. Singh indicated that the Microsoft team has made it clear that they are serious about supporting bitcoin through both words and actions. "They already have a global plan rolled out for us," Singh said.