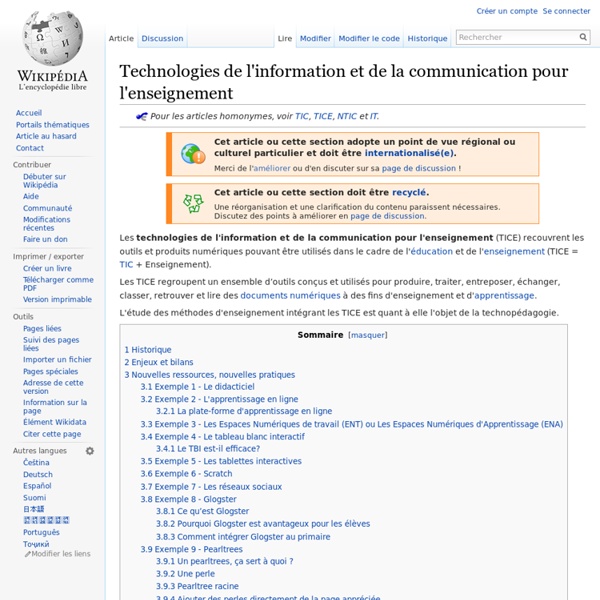 10 Social Media Tips for Reaching World Language Learners Feeling outdated, not connected, or even totally lost in the digital age? Well, let me assure you, droning on and on about grammatical structures is a surefire way to quickly lose student interest in the world language classroom. Instead, embrace something which truly interests the millennial student: social media. Utilizing it in the classroom will give your students practical, engaging ways to communicate in the language you teach.

What can computers teach that textbooks and paper can't? September 06, 2011 What can computers teach that textbooks and paper can’t? On Sunday, Matt Richtel publishing a terrific piece in the New York Times lamenting how schools are blowing billions on high-tech gewgaws, despite little evidence showing it helps learning. Richtel unearths lots of grisly facts: Study after study has found that many popular tech initiatives — such as one-to-one laptops, interactive whiteboards, and “clickers” — don’t necessarily correlate with higher test scores, and sometimes they correlate with lower ones. 7 Apps for Teaching Children Coding Skills It's hard to imagine a single career that doesn't have a need for someone who can code. Everything that "just works" has some type of code that makes it run. Coding (a.k.a. programming) is all around us. That's why all the cool kids are coding . . . or should be. Programming is not just the province of pale twenty-somethings in skinny jeans, hunched over three monitors, swigging Red Bull.

20 Ways the Apple Mac Changed Everything On January 24, 1984, at the Flint Center on De Anza College’s campus in Cupertino, California, Apple formally announced the Macintosh at its shareholder meeting, in front an audience so packed that large numbers of people who owned Apple stock couldn’t get in at all. Here’s a video of the entire event, complete with an introduction by then-CEO John Sculley apologizing to the shareholders who were stuck outside: Drawing heavily on inspiration from Xerox’s PARC lab and other research that came before it, as well as Apple’s own Lisa — but adding plenty of its own innovations — the Mac was the first successful computer with a graphical user interface, a mouse and the ability to show you what a printed document would look like before you printed it.

Stagnant Future, Stagnant Tests: Pointed Response to NY Times "Grading the Digital School" Matt Richtel's panoramic essay, "In Classroom of the Future, Stagnant Scores." weighs in this morning by "Grading the Digital School." I found myself cheering and jeering alternately throughout this piece. Why? Because it so quickly confuses "standards" with "standardized test scores" and technology put into classrooms with "preparing kids for a digital future (actually, the digital present: it's here, it's now, like it or not). These confusions are so pervasive in our culture and so urgent that I want to take a moment to focus on them. The essay is well worth reading and you can find it here:

Haïkus sur micro-blogue En savoir plus… Voir la suite... © 2014 Tw'Haïku Powered by Pinboard Theme by One Designs and WordPress 7 Apps To Turn Your iPad Into A Digital Whiteboard Whether you’re interesting in blending, flipping, personalizing, or differentiating your classroom, technology can be a huge help. Technology gives students direct access to content, which frees the teacher up for other roles. iPads function exceptionally well in this capacity, and one of their talents is to function as a digital whiteboard. Whether you want to lead an in-person class through the iPad screen, or you need remote access to eLearners or others in a school-to-school program, you’ve got options. Below are 8 apps (with various strengths and weaknesses–the only way to know if they truly fit your needs is to try them, unfortunately) that can help you blend and flip your classroom–or just give students more direct access to you, one another, and the content.

Richtel’s Rearview Mirror Misses the Mark Email Share September 5, 2011 - by Tom Vander Ark 0 Email Share Matt Richtel wrote the rearview mirror story of the last decade—technology layered on top of how we’ve always done school yielding meager results at least when measured in traditional ways. Engaging with Ebooks Can Aid Children’s Literacy, Study Finds Photo by Peter M. Fisher/Thinkstock Getty Images for SLJ. As younger and younger children recognize and use electronic devices as sources of information and entertainment, what is the impact on their literacy skills? Largely a positive one, according to a study printed in the January 2014 edition of the peer-reviewed journal SAGE Open. Matt Richtel - Bits Blog Thor Swift for The New York TimesClifford I. Nass, a professor of communication at Stanford University, in 2000. Clifford I. Nass, a professor of communication at Stanford University who died over the weekend, did pioneering work on multitasking and its impact on behavior and the brain.