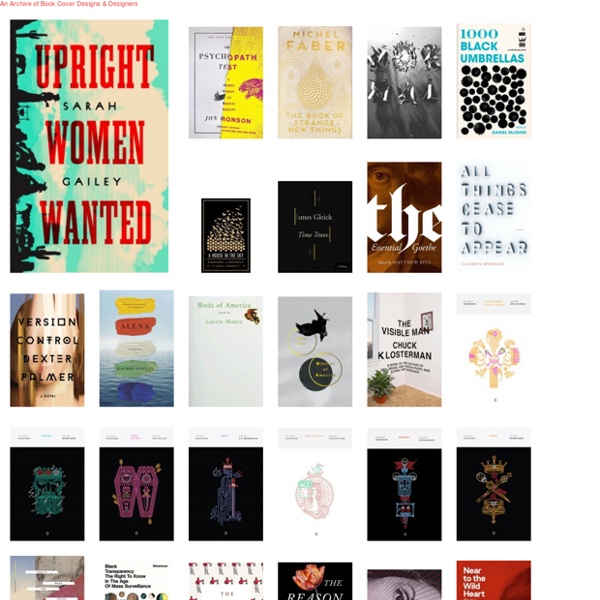 Book Cover Design: 50 Amazing Covers That You Will Want to Pick Up They say you shouldn’t judge a book by its cover. Maybe I’m superficial, but I do judge a book by its cover. And I suspect I’m not the only one. Book cover design is a crucial part of your marketing effort. You can string together the most insightful, lyrical, delicious words ever connected in the human lexicon, but if your book cover looks like Photoshop amateur hour, no one will ever pick it up.

I believe that binary arithemetickal engines will be of enormous I believe that binary arithemetickal engines will be of enormous significance Typographic illustration from Sanborn maps Title: John Wilkins in The Baroque Cycle, Neal Stephenson 25 Important Books of the 00s I decided, in the slew of retrospective ‘best of’ lists chronicling the decade we will be putting to rest in the next weeks, that even though I’m not the biggest fan of lists that try to span even a year, much less 10 of them, I might as well put something together. Of all the lists I’ve seen so far there hasn’t been a single one that came near anything remotely representing the kind of words I like to read, many of them repeating the same names by the same people in the same spots. And that’s fine and good, okay, I guess.

Animated GIF Generator What can I do with this gif maker? You can make high quality animated GIF images online for free, with simple and powerful customization options. What sources can I make gifs from? You can: Standart Mock-Up Book Standart Book Mock-Up I Features Item 7 Perspective. 300dpi. 3000×2000pix. A4 Page Size. Controlled Depth Of Field. 10 Different Book Covers of Stephen King's 'IT'! Anticipation for Andrés Muschietti’s adaptation of Stephen King’s iconic novel It is higher than ever, and in case you couldn’t tell we just love posting about it here on Bloody Disgusting (see here, here and here….or just see all of our coverage here). I’m currently in the middle of re-reading the Bible-sized novel (at the 42% mark, woo hoo!) in preparation for the film’s release in September. As I was doing so, I got stuck in the internet wormhole of looking at all of the different covers the novel has had over the years.

Radio Illustration Collective Radio is a South Africa-based illustration and design collective made up of Brad Hodgskiss, Byron Meiring and Gert Schoeman. Based on the impressive range of work in their portfolio, some of which you can see below, they are definitely a group to keep an eye on. I certainly will be. About Courtney The Rumpus Interview With David Shields David Shields, author of three novels and seven works of nonfiction, attempts to demolish the foundations of literature in his latest, Reality Hunger: A Manifesto. His target: the culture. He argues that there has been a dreadful trend in fiction, and not just genre fiction and the mass-market best seller, but within the entire literary spectrum. Stories using too much detail, too much description, stories within stories within stories deviating and dwelling in obscure tangents and conventional formula. David took time off from his busy schedule to meet in Wallingford, a neighborhood just west of the University of Washington overlooking Lake Union and the Seattle skyline.

Jerry's Map: Drawing an Imaginary World for 50 Years with the Outcome Determined by a Deck of Cards It’s a video that went undiscovered on Vimeo for years, and a project that’s been evolving for decades… with no clear end in sight. Jerry Gretzinger has an obsession unlike anyone else we’ve heard of: he’s spent almost his entire adult years creating a single never-ending map using hand painted pages and a special deck of cards to determine the outcome for his imaginary populous. It’s an all encompassing personal project that greatly predates modern games like SimCity and Minecraft, and Jerry’s brilliant (some would say obsessed) mind is at the controls.

Art and Design: Judge a Book By Its Cover Art and Design are the creative departments. Design does the interior, Art produces the jacket. The jacket is what we present to the world, but the interior text is what the actual book consists of. Both need a background in art, but you must be able to take criticism, be willing to edit your ideas, and understand that books are a collaborative effort. Vintage book covers spring to life via hypnotic, geometric animations Aeon email newsletters are issued by the not-for-profit, registered charity Aeon Media Group Ltd (Australian Business Number 80 612 076 614). This Email Newsletter Privacy Statement pertains to the personally identifying information you voluntarily submit in the form of your email address to receive our email newsletters More generally, when visiting the Aeon site you should refer to our site Privacy Policy here. This Email Newsletter Privacy Statement may change from time to time and was last revised 5 June, 2018. By clicking ‘Subscribe’ you agree to the following: