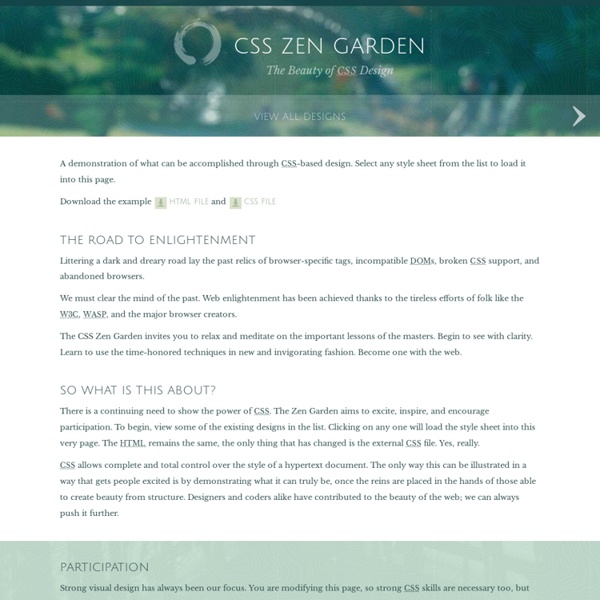 So What is This About? There is a continuing need to show the power of CSS. The Zen Garden aims to excite, inspire, and encourage participation. To begin, view some of the existing designs in the list. Clicking on any one will load the style sheet into this very page. The HTML remains the same, the only thing that has changed is the external CSS file.

Pure CSS drawings, 50 examples As Wikipedia says, Cascading Style Sheets (CSS) is a style sheet language used to describe the presentation semantics (that is, the look and formatting) of a document written in a markup language. Its most common application is to style web pages written in HTML and XHTML, but the language can also be applied to any kind of XML document, including SVG and XUL. But beyond the web design, you can use CSS to create some pretty cool graphics, as the ones we show you below. 1. 3D CSS Puzzle by Stu Nicholls This puzzle was made completely with CSS, must have taken a lot of time. 2.

The Perfect 3 Column Liquid Layout: No CSS hacks. SEO friendly. iPhone compatible. Download this layout (25kb zip file). Percentage dimensions of the holy grail layout All the dimensions are in percentage widths so the layout adjusts to any screen resolution. Vertical dimensions are not set so they stretch to the height of the content. The first 5 online resources to use when learning to code Even if you think the buzz around "learning how to code" is overkill, you have to admit it's here to stay. Just like it's easier to learn a foreign language if you start in grade school, getting an early grasp on mark-up and programming languages such as HTML, CSS and Java ensures you'll have an idea of what makes our digital lives and devices tick, even if you don't plan on becoming a software developer. Zach Sims, co-founder and CEO of Codecademy, tells Mashable that learning how to code is reasonably easy for beginners, especially people under 18. This year, Codecademy set up initiatives in England, Estonia and Argentina to bring coding education to young students — England and Estonia both added coding to their national curricula.

10 HTML5 Video Players as Alternatives to Flash Player HTML5 new specifications for a video is for sure one of the most talked aspects in the range of many new notable HTML5 features developed for more dynamic web applications and interfaces. Though support for HTML5 is still evolving, a video element has clear benefits for the users who can now get browser-native video players without any third-party plugins at all. In the current blog entry we’ve covered some of the best HTML5 media player implementations to help you get the most out of HTML5 video tag and embed video content into your web pages. This round-up is done specifically for you to decide which HTML5 video player is better for your website design project, so check out a few of the solutions that we particularly like. We invite you to rate the content, quality, and genre of these great video players and opt for the choices according to your needs.

CSS Zen Garden: The Beauty of CSS Design So What is This About? There is a continuing need to show the power of CSS. The Zen Garden aims to excite, inspire, and encourage participation. To begin, view some of the existing designs in the list. Clicking on any one will load the style sheet into this very page. 13 Excellent Tools and Systems for CSS Grid Based Layouts A good grid can be a strong foundation for any design. Using grids got its start in print design, but has made it’s way over to the web. There are several advantages to using grids in web design, but primarily they help achieve structure and consistency in layouts. If you have yet to start using grids in your web design projects, but want to get started…we’re here to help. Frameworks for Designers These days, “framework” is quite a buzzword in web development. With JavaScript frameworks like the Yahoo User Interface library, jQuery, and Prototype getting a lot of attention and web application frameworks like Rails and Django getting even more, it seems like everyone is using some kind of framework to build their sites. But what exactly is a framework? And are they only useful to programmers, or can we web designers benefit from the concept, as well? What is a framework?

Advanced HTML A more in-depth look at HTML and your WordPress.com site, continuing on from Beginning HTML. If you have some basic familiarity and understanding of HTML, you can use your Text editor to add some HTML that overrides the Visual editor’s default formatting. Here are some suggestions. Note: This resource is for using HTML to make simple changes to the formatting of individual posts and pages.

HTML5 video The HTML5 specification introduced the video element for the purpose of playing videos,[1] partially replacing the object element. HTML5 video is intended by its creators to become the new standard way to show video on the web without plugins, instead of the previous de facto standard of using the proprietary Adobe Flash plugin, but has been hampered by lack of agreement as to which video coding formats should be supported in web browsers. History of <video> element[edit] The <video> element was proposed by Opera Software in February 2007.[2] Opera also released a preview build that was showcased the same day,[3][4] and a manifesto that called for video to become a first-class citizen of the web.[5] <video> element examples[edit]

How to Create (Animated) Text Fills A tutorial on how to create various types of (animated) fills and strokes for text using different techniques including CSS and SVG. View demo Download source I like to think that the future is already here. We have already so many exciting possibilities in CSS and SVG that some time ago we could only dream about. For example, we now have many possible ways to create text with an animated fill! About a year ago the article Techniques for creating textured text by Sara Soueidan was published here on Codrops. CSS Tools: Reset CSS The goal of a reset stylesheet is to reduce browser inconsistencies in things like default line heights, margins and font sizes of headings, and so on. The general reasoning behind this was discussed in a May 2007 post, if you're interested. Reset styles quite often appear in CSS frameworks, and the original "meyerweb reset" found its way into Blueprint, among others. The reset styles given here are intentionally very generic. There isn't any default color or background set for the body element, for example.

CSS examples - Equalising columns ::You are here: Home > Equal Columns Before you start you should know that the only element that will base its height dependent on another elements height is a table-cell. Therefore if you want equalising columns in your layout then a table may still be the best alternative until there is full-support for display:table. There are some ways however to give the illusion of equal columns and I will show you some techniques below which vary in difficulty and usefulness. Using a background image This is perhaps the easiest way to imitate a full length column without requiring any additional html mark-up.

Beginning HTML A basic understanding of HTML can help you get more out of your WordPress.com site. This article explains how. WordPress.com provides you with a Text editor, so that you can see the HTML markup of each of your posts and pages. HTML5 Audio HTML5 Audio is a subject of the HTML5 specification, investigating audio input, playback, synthesis, as well as speech to text in the browser. <audio> element[edit] The <audio> element represents a sound, or an audio stream.[1] It is commonly used to play back a single audio file within a web page, showing a GUI widget with play/pause/volume controls. The <audio> element has these attributes: global attributes (accesskey; class; contenteditable; contextmenu; dir; draggable; dropzone; hidden; id; lang; spellcheck; style; tabindex; title; translate)autoplay = "autoplay" or "" (empty string) or empty Instructs the UA to automatically begin playback of the audio stream as soon as it can do so without stopping.preload = "none" or "metadata" or "auto" or "" (empty string) or empty Represents a hint to the UA about whether optimistic downloading of the audio stream itself or its metadata is considered worthwhile. Example:[2]