"Only the colors move." By request, I am making this time lapse video from the National Building Museum exhibition "Scaling Washington" available for viewing. 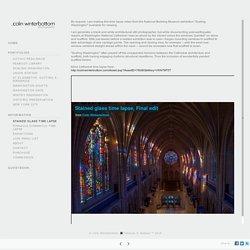 I am generally a black and white architectural still photographer, but while documenting post-earthquake repairs at Washington National Cathedral I was so struck by the vibrant colors the windows "painted" on stone and scaffold. With just weeks before a related exhibition was to open I began mounting cameras to scaffold to take advantage of rare vantage points. The opening and closing view, for example -- with the west rose window centered straight ahead within the nave -- cannot be recreated now that scaffold is down. "Scaling Washington" often played off the unexpected harmony between the Cathedral architecture and scaffold, both having engaging rhythmic structural repetitions. BEGOTTEN (1991) “In BEGOTTEN, a time is depicted that predates spoken language; communication is made on a sensory level.” 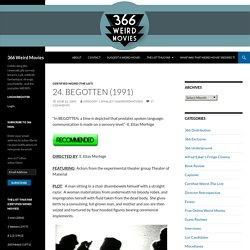 –E. Elias Merhige DIRECTED BY: E. Elias Merhige FEATURING: Actors from the experimental theater group Theater of Material PLOT: A man sitting in a chair disembowels himself with a straight razor. Each frame of film was painstakingly manipulated to create the distressed chiaroscuro universe of the movie. INDELIBLE IMAGE: The painfully graphic image of “God disemboweling Himself” with a straight razor–shot in the grainy, high-contrast black and white–is not easily forgotten.

WHAT MAKES IT WEIRD: A minimalist, mythic narrative of grotesque, ritualized suffering enshrouded in astonishing abstract avant-garde visuals and a hypnotic ambient soundtrack. Original trailer for Begotten. The Hairy Who. Little. Sheba the seductive russian spy. The Woodcuts of Fritz Eichenberg. The Master at Work It is difficult to conceive of an artistic medium more naturally suited to the Victorian Gothic than the woodcut, or a graver whose style so powerfully evokes the sinister and tempestuous spirit of the genre so well as Fritz Eichenberg. 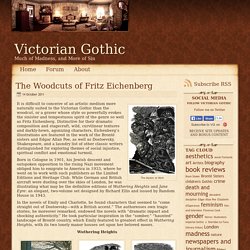 Distinctive for their dramatic composition and stagecraft, wild, curvilinear textures and darkly-hewn, agonizing characters, Eichenberg’s illustrations are featured in the work of the Brontë sisters and Edgar Allan Poe, as well as Dostoevsky, Shakespeare, and a laundry list of other classic writers distinguished for exploring themes of social injustice, spiritual conflict and emotional turmoil. Born in Cologne in 1901, his Jewish descent and outspoken opposition to the rising Nazi movement obliged him to emigrate to America in 1933, where he went on to work with such publishers as the Limited Editions and Heritage Club. Wuthering Heights In the introduction to Eichenberg’s retrospective, The Wood and the Graver, Alan Fern wrote: Threnody to the new victims of hiroshima. Ghazala's Threnody and Requiem CDs can be ordered through Realization Recordings •perfect sound forever:Perfect Sound Forever's interview with Ghazala on his art of "Circuit-Bending" •magnet: "...continuing in the tradition of such sound pioneers as Karlheinz Stockhausen and John Cage, Q R Ghazala is blazing new paths as an experimental composer, musician and instrument designer...

There are some works i seldom listen to, yet represent for me a sort of ne plus ultra of musical achievement; one of these being the "Threnody to the New Victims of Hiroshima" by Q.R. Ghazala, an electronic musician who builds his own instruments, including the "vox insecta" which performs this. His aim was to synthesize an insect voice that is the voice of all insects, & doubtless he has succeeded. The monotonous, almost subliminally-varying buzz is just a little more disturbing than white noise, & one can ask if an insect orchestra would really not invest more effort in dynamics, since bugs in general seem not overfond of repose. But these are quibbles. It's a masterpiece. (Xv. 5/30/03) – graywyvern 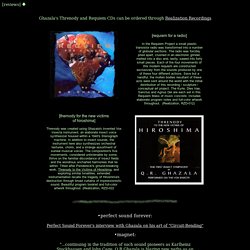 "On Alba, the G F P Bunny" With help from some whitecoats, Ed Kac Patched the genes of a rabbit in spots, So the right wavelength'd blues Turn her pelt bright chartreuse. What's wrong with this picture? Er...lots. 5-13-01 – graywyvern 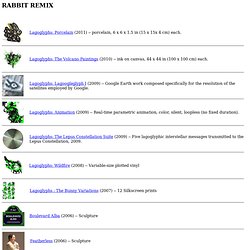 My leatherbound, repaired-with-electrical -tape, hand-lettrered-spine copy is a very special book. this thoroughly forgotten poet had one of the most mellifluous techniques in the history of english versification. he makes even swinburne sound clunky. – graywyvern