New Generation of Luxury Yurts. Construction Diary: Modern Yurt by Zach Both. Serene, chic, and decidedly modern, the yurt that Zach Both and Nicole Lopez now call home in Portland, Oregon, was completed over six months with a budget of about $63,000. 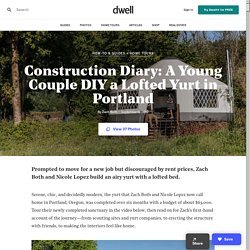 Tour their newly completed sanctuary in the video below, then read on for Zach’s first-hand account of the journey—from scouting sites and yurt companies, to erecting the structure with friends, to making the interiors feel like home. Volume 0% Press shift question mark to access a list of keyboard shortcuts Play/PauseSPACE Increase Volume↑ Decrease Volume↓ Seek Forward→ Seek Backward← Captions On/Offc Fullscreen/Exit Fullscreenf Mute/Unmutem Seek %0-9 Welcome To The Jungle House By CplusC 1.

We needed a change. Dejected over rent prices in this quasi-utopia, we immediately began considering alternative dwellings that I was introduced to during my time traveling the country in a self-converted camper van. Amazing One Of A Kind Yurt - Full Tour + Pros & Cons of Yurt Living. YURT LIFE - ten things we wish we'd known before going off grid. 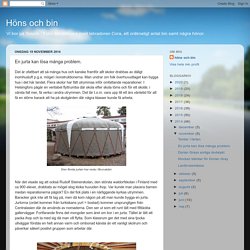 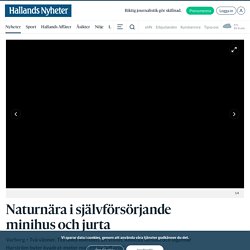 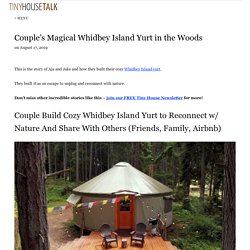 They built it as an escape to unplug and reconnect with nature. Don’t miss other incredible stories like this – join our FREE Tiny House Newsletter for more! Images via Tiny House Giant Journey/YouTube. Two-story yurt - un. Pinterest. Yurts Archives - Tiny House Swoon. Yurta precio. A Firsthand Look at the Magnolia 2300 Yurt - the First Energy Star Home in British Columbia. Many people dream of building their own home, but few actually bring that dream to fruition. 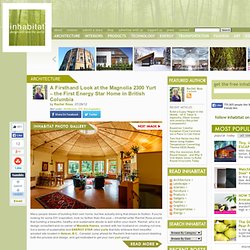 If you're looking for some DIY inspiration, look no further than this post -- Inhabitat writer Rachel Ross proves that building a beautiful, healthy and sustainable abode is well within your reach. Rachel, who is a design consultant and co-owner of Mandala Homes, worked with her husband on creating not one, but a series of sustainable and ENERGY STAR rated yurts that fully embrace their beautiful wooded site located in Nelson, B.C., Canada! Jump ahead for Rachel's first-hand account detailing both the process and design, and get motivated to get your own yurt going! Rachel Ross: Meet our house, the Magnolia 2300. It’s a three bedroom, round, passive solar home located in the lush green forest of Nelson, B.C. A yurt of sticks and mud. Round Houses & Yurts from Mindful Living. Yurt homes. Brilliant Yurt Design! - Mixing Tradition with Super Modern Construction. 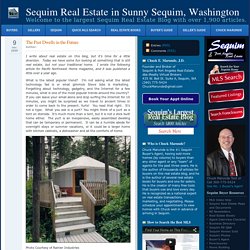 Today we have some fun looking at something that is still real estate, but not your traditional home. I wrote the following article for Pacific Northwest Home magazine, and it was published a little over a year ago. What is the latest popular trend? I’m not asking what the latest technology fad is or what gimmick Steve Jobs is marketing. Forgetting about technology, gadgetry, and the Internet for a few minutes, what is one of the most popular trends around the country? Photo Courtesy of Rainier Industries. Yurtstory: the history of yurts ancient and modern. By becky kemery, author of YURTS: Living in the Round Many, many years ago-centuries ago, in fact-there lived a people with oak colored skin and almond eyes, herders on horseback and camel who followed sheep and goats and yak across ancient grasslands at the top of the world. 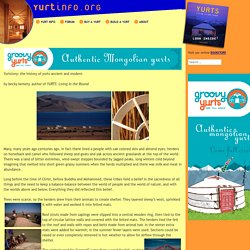 Theirs was a land of bitter extremes, wind-swept steppes bounded by jagged peaks, long winters cold beyond imagining that melted into short green grassy summers when the herds multiplied and there was milk and meat in abundance. Long before the time of Christ, before Buddha and Mohammed, these tribes held a belief in the sacredness of all things and the need to keep a balance-balance between the world of people and the world of nature, and with the worlds above and below. Everything they did reflected this belief. Trees were scarce, so the herders drew from their animals to create shelter.

It features a reciprocal roof, meaning that every beam is supported by all the beams in front, and in turn supports all behind it. The beauty of the yurt is the circular space it contains, we live so often in box shaped houses with box shaped rooms. The project made me think a lot about the underused power of the circle in architecture and society. The bamboo framework The bamboo framework anchors into the deck The wattle is woven into the yurt framework, notice the tire which aided the raising of the reciprocal roof. Gotta Getta Ger (Yurt) We have the land. 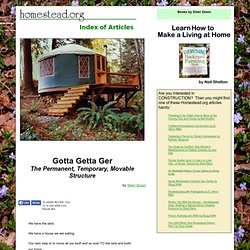 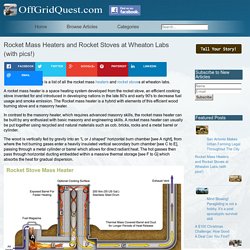 OK, yurts are no longer a bad hippie joke; they are light and efficient and a viable alternative to traditional construction. 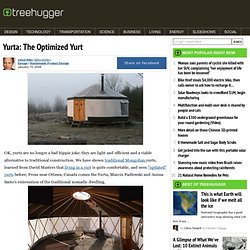 We have shown traditional Mongolian yurts, learned from David Masters that living in a yurt is quite comfortable, and seen "updated" yurts before; From near Ottawa, Canada comes the Yurta, Marcin Padlewski and Anissa Szeto's reinvention of the traditional nomadic dwelling. "The main structure, visible on the inside, is made of wood; showcasing the natural feel and aesthetic qualities of the Yurta (such as the frame) The outer covers are sewn with great care and precision and can be made of various materials, like marine canvas or polyesters. "- if you compare it to David's Pacific Oregon yurt, it appears far lighter and more open than the more traditional designs.

"The circular space is simply beautiful; combining the finest elements of traditional and modern designs.