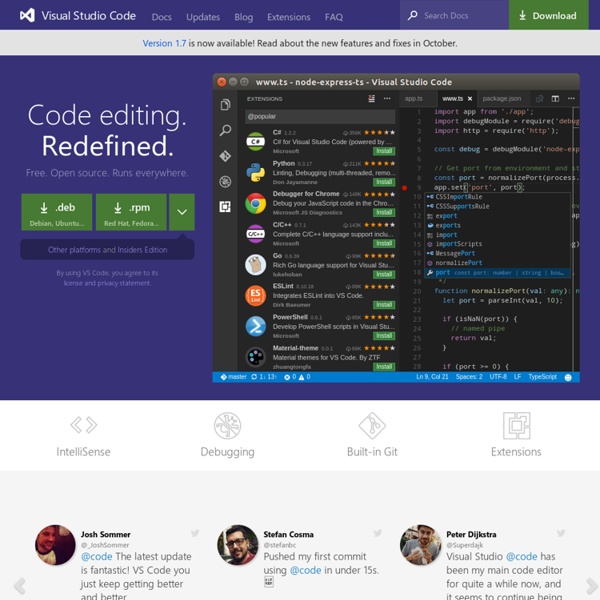 10 Must-have VS Code Extensions for JavaScript Developers In this article, I’ll focus on a list of must-have VS Code extensions for JavaScript developers. Visual Studio Code is undoubtedly the most popular lightweight code editor today. It does borrow heavily from other popular code editors, mostly Sublime Text and Atom. However, its success mainly comes from its ability to provide better performance and stability. In addition, it also provides much needed features like IntelliSense, which were only available in full-sized IDEs like Eclipse or Visual Studio 2017. The power of VS Code no doubt comes from the marketplace. SOLVED: What Do The Suffix Letters on Intel Processors Mean – Up & Running Technologies, Tech How To's Intel used to have a pretty simple naming scheme for its CPU’s but as the market demanded more features, Intel started adding suffix letters to its processors. Often the letters added on to the end of an Intel CPU number can mean enormous differences. Below is a list of Intel CPU Suffix Letters: C – Desktop processor based on the LGA 1150 package with high performance graphicsH – High performance graphicsK – Unlocked Frequency Multiplier – typically much more expensive gamer CPUsM – Mobile as in laptops, tablets…Q – Quad-coreR – Desktop processor based on BGA1364 (mobile) package with high performance graphicsS – Performance-optimized lifestyleT – Power-optimized lifestyle and typically lower performanceU – Ultra-low power – always lower performanceX – Extreme edition – typically gamer and workstation CPU’s with as many as 10 coresY – Extremely low power – typically used in tablets and Ultrabook’s To understand Intel’s CPU naming convention this example should help:

Webpage Source Code Viewer Source Code Viewer Enter a URL About Source Code Viewer What is Webpage Source Code? Well to understand what is webpage source code ? first its good to understand that website consists of a lot of webpages , like when you goto Facebook there you will find a webpage which will show your profile , other webpage will be showing videos , another webpage will be showing posts from your friends and there are tons of more like that. Clonezilla Live on USB Some machine, e.g. Asus Eee PC or Acer Aspire One, comes without CD/DVD drive. In this case, an USB flash drive or USB hard drive is the best way to boot Clonezilla live. You can follow the following to make a bootable Clonezilla live USB flash drive or hard drive using either MS Windows or GNU/Linux.

My personal favorite Visual Studio Code extensions Introduction This is a short article about all the Visual Studio Code extensions that I personally find to be great tools to have. This are my favorites, so if you use different extensions that I didn’t mention, feel free to let me know in the comments down below. Just a note… Optimize animated GIF For permanent links you can use: Lossy GIF compression GIF compressor optimizes GIFs using gifsicle and Lossy GIF encoder, which implements lossy LZW compression.It can reduce animated GIF file size by 30%—50% at a cost of some dithering/noise. You can adjust compression level with a simple slider to get the best result for your use case.This is the default method and should work for any GIF. Color Reduction

Building Forms - Learn to Code HTML & CSS Lesson 10 Forms are an essential part of the Internet, as they provide a way for websites to capture information from users and to process requests, and they offer controls for nearly every imaginable use of an application. Through controls or fields, forms can request a small amount of information—often a search query or a username and password—or a large amount of information—perhaps shipping and billing information or an entire job application. We need to know how to build forms in order to acquire user input.

Processing for Android Welcome to Processing for Android! In this tutorial you will learn how to use the Android Mode in Processing to run your sketches on an Android device or in the emulator. Installing the SDK The first time you open the Android mode after installing it through the CM or manually, you will see this window, asking to either locate a pre-installed Android SDK, or download the Android SDK automatically: If you still want to use an SDK already downloaded to your computer, choose the "Locate SDK path manually" option and select the folder containing the SDK. However, this SDK should include Android 8.0 (API level 26) or higher.

15 VS Code Extensions to Save Your Time and Make You a Better Developer A list of useful VS Code extensions for frontend developers VS Code has a marketplace, and it contains a collection of plugins that can be installed into the text editor to make it more powerful. We can open market place by selecting Extension option in View menu or simply press shift + cmd + X . The below list of extensions can be installed in VS Code to save your time in multiple ways and make you a better developer. 58 Differences Between British And American English That Still Confuse Everyone. Words can be deceiving sometimes, especially that the English language, or any language for that matter, is always evolving. There are words that confuse the logic out of our nerdy heads because we thought they meant something but in fact, they mean a completely different thing. So here is a list of some of the words that do not mean what you think they mean. Bemused If you think bemused means the same thing as amused, you're absolutely wrong.

Here Is Yahoo's Native Ad Network Yahoo's content recommendation box, which appears on both desktop and mobile sites, looks like the content marketing packages that companies like Outbrain and Taboola place on publishers' sites. Those appear near a page's main article and link to other stories from around the web that someone might be interested in reading. They also usually include links that companies pay for in order to promote their pages or brands. But Yahoo's box only shows the publisher's own content plus a Yahoo native ad. The native ad network would be one way for Yahoo to take advantage of advertisers' interest in its so-called native Stream Ads and offset the company's years-long display revenue declines. Yahoo's Stream Ads have appeared within the content feeds on Yahoo's owned-and-operated sites since they were introduced in April 2013.

sans titre by Victor A. Requena Debugging your web applications with Visual Studio Code makes you more efficient. It helps you save a lot of time and keeps your code cleaner. This is because you don’t have to write a bunch of console.logs and you can go through your code execution line by line.