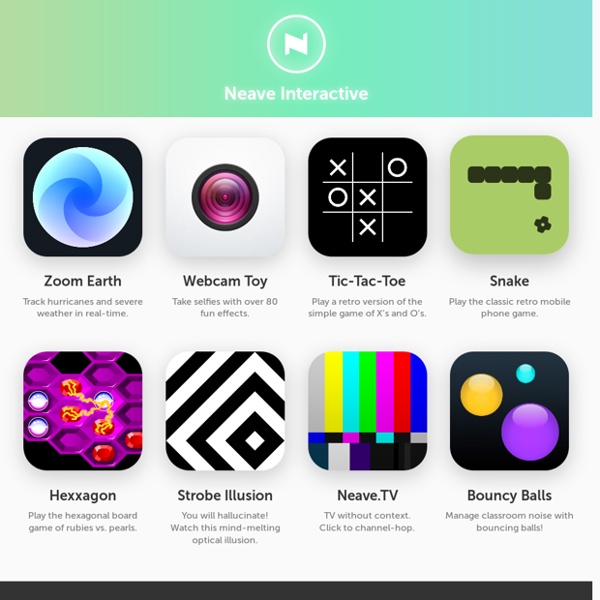 Play BREAKTHROUGH, a free online game on Kongregate Check your security settings Connection issues are typically caused by security settings on your network or computer. Check that your firewall or router has port 5222 open and allowing traffic. If you are on a school or office network, you may need to contact your network administrator to make the necessary changes. How to install Windows 10 on Raspberry Pi 2: 6 steps to bake a micro computer Introduction Windows 10 is out. If you didn’t know, you can get a free upgrade if you currently run Windows 8, Windows 8.1 or Windows 7. You lucky things. However, Microsoft has also made a totally free version of Windows 10 for Raspberry Pi 2, the super-affordable circuit board computer. It’s easy to get, too. WIND WALKING KINETIC SCULPTURES - WHOA - Nightly (Build 20120320043530) Theo Jansen is a Dutch artist and kinetic sculptor. He builds large works which resemble skeletons of animals that are able to walk using the wind on the beaches of the Netherlands. His animated works are a fusion of art and engineering; in a car company (BMW) television commercial Jansen says: “The walls between art and engineering exist only in our minds.” He strives at equipping his creations with their own intelligence to manage avoiding obstacles, by changing their course when one is detected, such as the sea itself. Theo Jansen has been creating wind-walking examples of artificial life since 1990.

24 Steps-Left Pages That Enhance The User Registration Process The registration process should entail simplicity, great usability and a high-level of accessibility. With numerous sites wanting to focus on how attractive and eye-catching their sign-up forms are, they seem to “forget” one principle; how the user interacts with the registration form. Below we’ve included a showcase of inspiration that solely focuses on one simple yet entirely effective characteristic, enhancing the registration and check out process using steps-left. Anti Joke What are Antijokes? Anti Jokes (or Anti Humor) is a type of comedy in which the uses is set up to expect a typical joke setup however the joke ends with such anticlimax that it becomes funny in its own right. The lack of punchline is the punchline. We’ve just released huge update to the iOS app! Now, access all your favorite text and photo sites like Anti-Joke, DIYLOL! A few things didn’t make the original cut (like comments) but they’ll be back soon.

A to K - 2048 clone by Creative Spark Studios How to play: Use your arrow keys to move the tiles. When two tiles with the same letter touch, they merge into the next letter in the alphabet! The goal is to create the letter K. OPAC The Computerized Catalogue has replaced the old Card Drawer System in libraries that have been computerized. It lets you browse items by author, title, subject, class or ISBN number and a Keyword search is included as well. Another major advantage of this service is that one can browse items not only pertaining to the library from where he/she is making the search but is automatically browsing all the material that is present in all the Public Libraries (and the National Library) both in Malta and Gozo. Clients are also informed of whether the item in question is available or is currently on loan, for example. Clients can make use of the various outlets that are present at the Central Public Library and at the Regional Libraries.

View -These are some useful tricks - On Just DWL Just DWL is your best source of fun. Follow @linkupviddeos Personalise Post a fun Upload funny pictures, paste pictures or YouTube, Funnyordie, Vimeo, Videofy URL, accepting GIF/JPG/PNG Log in 30 Impressive Ways to Design Sign-Up Page/Form  Learn how to earn $125 or more per hour as a freelancer - Click Here Looking for hosting?. We recommend MediaTemple for web hosting. Use Code MTLOVESDESIGN for 20% off In most online business the revenue of the site solely depends on the registered and active users and Making the visitor of your site to sign up isn’t easy, nobody likes to fill in forms .

Soda Machine Hack Most modern vending machines have little computers inside. A tiny screen usually displays some information. Although relatively little known, pressing a certain combinations of buttons can control the settings. For instance, you can check the internal temperature, view the amount of money inside, empty change, or dump certain beverages.

Pacxon - Online Game Additional Information: Use Pacman to capture sections of the board in Pacxon. Clear 80% to progress to the next level. Pacxon is the most popular game on the whole site! Michael Cerdeiros - Cerious Productions Changelog and Updates The following websites were part of the original list but they are either no longer available or have been replaced with better alternatives. 327k Shares

Unique Steampunk Insects Since the late 1990′s style steampunk is becoming more and more popular, and not only in the literature. Various modern utilitarian objects have been modded by enthusiasts into a pseudo-Victorian mechanical “steampunk” style. And often this stylization gives very unexpected results. Like, for example, art works of american sculptor Mike Libby. His studio Insect Lab make robots from dried insects. Insects for his works come from around the world, from Africa, China, New Guinea, Brazil, Texas, etc.