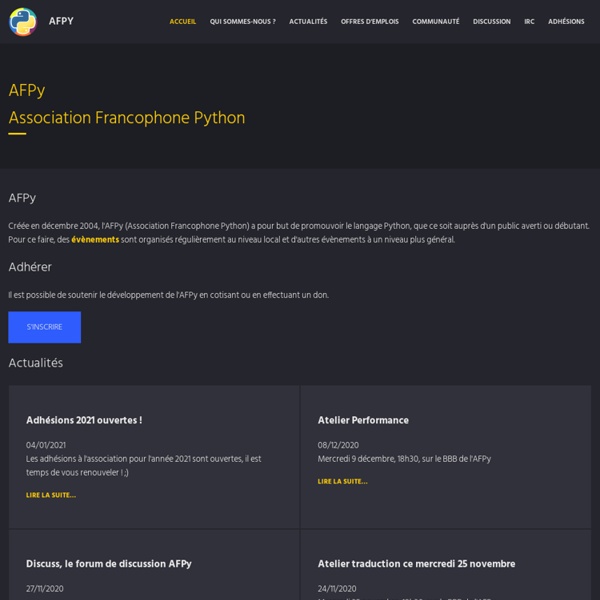 Editors If you have anything to contribute -- e.g. configurations for editors, new editors, or opinion -- don't hesitate to edit or create pages. There's an EditorConfigurationHowto available. Please keep wiki links as wiki links, use external links only if there is no existing page for the editor. Please add pages like BoaConstructor also to page IntegratedDevelopmentEnvironments. Multiplatform Editors How not to write Python code » Ikke’s blog Lately I’ve been reading some rather unclean Python code. Maybe this is mainly because the author(s) of the code had no in-depth knowledge of the Python language itself, the ‘platform’ delivered with cPython,… Here’s a list of some of the mistakes you should really try to avoid when writing Python code: Some days ago RealNitro pointed me at this list of essential Python readings.

Advanced Media Workflow Association AMWA and EBU have formed a Joint Task Force on a Framework for Interoperability of Media Services (FIMS) in TV Production. While the market is moving away from traditional videocentric technologies in favour of IT based ones, the design and management of enterprise level production systems is still a challenge for most broadcasters. A main obstacle has been identified in the lack of standard interfaces between components and systems that forces system integrators to devote consistent resources in the development of custom adapters to integrate components from different vendors. This in turn generates scalability and maintenance problems as the substitution or upgrade of one component can require further adaptation expenses. AMWA has set up a Media Services Architecture Group (MSAG) with a similar mandate. FIMS Request for Advice (doc, 200k)

Aptana Studio — Advanced Python 0.3 documentation Aptana Studio is an IDE - integrated development environment - based on the Eclipse framework. It provides powerful tools for exploring, understanding, and refactoring your code. Because Aptana Studio is Eclipse + a plugin, in class I may refer to “Aptana” and “Eclipse” interchangeably. Essential Python Reading List Here’s my essential Python reading list. I’ve tried to order the items so you can pause or stop reading at any point: at every stage you’ll have learned about as much possible about Python for the effort you’ve put in. The Zen of Python The Zen of Python is so short I can include it here in its entirety. 10 Awesome Infographics for Graphic Designers As a graphic designer, you’ve probably designed at least a few infographics for your clients – or even for fun. You can create (and sell) infographics for any topic or industry, which means infographics can be a lucrative source of income. Some designers make a full-time living designing infographics alone.

Labs Codecademy Labs is a place for you to program in Ruby, Python, and JavaScript online without downloading a code editor or IDE. Share your programs with friends and use your knowledge from Codecademy lessons! Want to learn more about these languages? Distutils-SIG Charter The Distutils-SIG exists to discuss the design, implementation, and maintenance of a suite of module distribution utilities for Python. These utilities are grouped in the 'distutils' package in Python. The goal of distutils is to make building, packaging, distributing, and installing Python modules, extensions, and applications painless and standardized. There are also third-party tools built on the top of distutils, that are using the Distutils mailing list as their home.

Digital Caliper Serial Interface I could use this unit that Kevin Timmerman designed! I have the same digital caliper that he designed the serial interface for. Project Page. "The caliper sends a burst of data approximately three times each second. Each burst contains 48 bits of data as shown in timing.pdf. The first 24 bits are the position relative to the zero point set on the caliper.

No, Seriously, Why Should I Learn to Code? The geeks have inherited the earth. A couple decades ago if you talked with friends in a chat room, you were cast as a socially-awkward nerd. Doing the same today just means you're a typical Facebook user. Broadband Internet connections and smartphones have taken the Information Age that technically started in the 1970s with PCs and pushed it into daily mainstream life. Along with this culture change is a social anxiety: Should I learn to code? ctypes tutorial Note: The code samples in this tutorial uses doctest to make sure that they actually work. Since some code samples behave differently under Linux, Windows, or Mac OS X, they contain doctest directives in comments. Note: Quite some code samples references the ctypes c_int type. This type is an alias to the c_long type on 32-bit systems. So, you should not be confused if c_long is printed if you would expect c_int - they are actually the same type.

Digital Caliper Pinouts Digital calipers are one of the most important tools for accurate machining of existing pieces, such as project boxes, switches, and custom parts. This is particularly true when you don’t have the manufacturer’s datasheet to provide the dimensions of an object. Inexpensive imported digital caliper Besides the LCD display, many calipers have a digital output port for their data. Name-brand calipers charge significantly more money for the inclusion of a data port, even though they often build it into all of their models, only to be hidden by the plastic case. Pyjamas 0.8.1 Pyjamas Widget API for Web applications, in Python Current Release: 0.8.1~+alpha1--------------- This is the 0.8.1~+alpha1 release of Pyjamas. Ruby vs Python: Choosing Your First Programming Language: Course Report (updated August 2016) So you've decided to switch careers and jump into tech. Congrats! Now, you're probably wondering which programming language you should learn first! Join Course Report and Bloc as we tackle all of your questions about two of the most popular languages taught at coding bootcamps: Ruby vs Python.