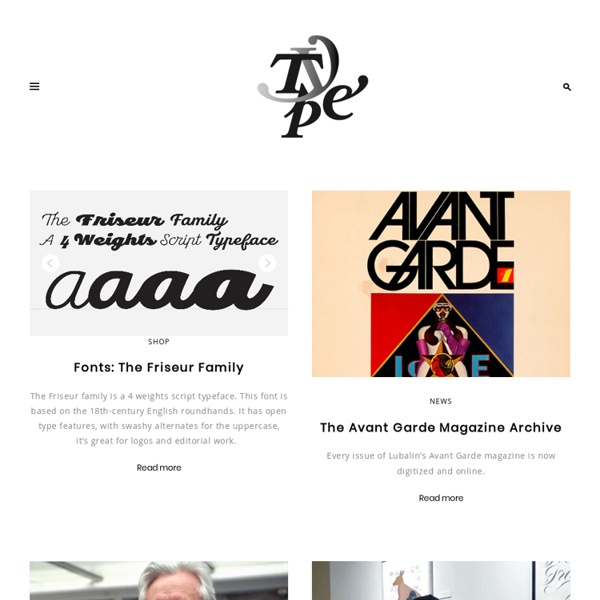 LE BOOK LULU* creates her illustrations through a sophisticated process of combining hand-drawn motives with computer elements, which together make up the formal and technical synthesis defining LULU's widely appreciated illustration style. After her first illustration work for Tyler Brulé at Wink Creative some years ago, she quickly became known as one of Germany's emerging talents in illustration design, working for clients such as Bloomingdale's and Mercedes Benz. In 2005 she was chosen as one of the 20 top visual artists by the American magazine "Print," and she was also shortlisted that same year by American Illustration. LULU* lives and works in Berlin. please visit also and instagram : Alternatives To Your Favorite Serif Typefaces [Updated With Specimens] Hello, my name is Bram, a brand strategist, hacker and typophile. I’ll be guest blogging for Designer Daily during Mirko’s vacation week. Consider this fact: today, we have more typefaces than ever designed, yet most designers chose to stick with their Helveticas, Gills and Caslons. This isn’t bad, per se; after all, going with the familiar guarantees predictable outcome.

40 Remarkable Examples Of Typography Design #5 It’s been a really long time since we did our series of typography inspiration. Believe in or not, it was all the way back in January 2011. Today we are happy to bring it back, to feature some outstanding typography designs. We selected all of the following work based on quality, thus giving you the best of the best.

How to digitize your hand lettering using Illustrator's Image Trace 0:03 Today I'm going to show you how to vectorize your hand lettering from paper to digital using the image trace in Illustrator 0:10 I'm going to use my Tombow Dual Brush Pen to write some letters. 0:37 I've gone ahead and texted myself this photo. I'm going to take it from Messages and drag it into Photoshop. 65 Beautiful Fonts You Can Download For Free Freebie 65 Beautiful Fonts You Can Download For Free by Alex on Aug 9, 2012 • 9:43 am 11 Comments There are so many free fonts all around the web these days and sometimes it makes me think is their any really point purchasing fonts. I’ve decide to collect 65 fonts which are suitable for web, print, etc just overall high fonts which can be used in design projects. Neuton Font Family

The 100 Greatest Free Fonts for 2014 Here we are, once again, with our now-famous selection of the top 100 free fonts for 2014. This year we have only selected fonts published or updated in late 2013 and 2014, giving you one of the most up-to-date lists around. The majority are completely free with licenses for commercial use; the odd few available for personal use only have extended license options at a very reasonable price. The free font list comprises both entire font families and single weight downloads; either way, there is something for everyone and we think you'll love the ones we have picked out for you. Font Selection

Ten Awesome Alternative Free Web Fonts Free web fonts such Museo, League Gothic, Droid and Lobster have been around since the dawn of the @font-face revolution. Whilst these are all fantastic typefaces, they are beginning to suffer from over-use. Services such as Google Web Fonts and FontSquirrel are expanding their free @font-face collections weekly but it can be difficult to pick through masses of naff display fonts to find that perfect typeface. The purpose of this article is to highlight some great fonts that are around that you may not have considered using yet. 10 Awesome Free Web Fonts Franchise Bold Described by its designer Derek Weathersbee as a “stout display face”, Franchise is strong, tall and full of character.

60 Amazing Examples of Typography Posters - Webitect Typographical designs can mean a huge deal to both designers and art appreciators. It’s a great way for designers to express their thoughts, ideas, feelings, and believes. It also helps the appreciators find the inspiration to move forward. Below is a collection of absolutely magnificent typography posters ranging from graphical portraits made entirely from text, big and bold statements that send out positive messages out there, and abstract designs that give you the right amount of inspiration needed to get your work done!

Blog — Plurabelle Calligraphy & Design Studio In April I will be leading two beginner-level workshops in Los Angeles. Each 3-hour class will cover the basics of modern script calligraphy, from holding the pen to writing the complete lowercase alphabet. Absolutely no previous calligraphy experience is required. The workshops are hands-on using all the traditional materials such as pointed nibs, pen holders and ink.

Free simple icons for your next project Follow @iconmonstr Support me ads via Carbon 3 months ago 4 months ago 5 months ago Leica X2 Edition Fedrigoni: The Paper Skin Geometry Global Frankfurt introduces the limited edition Leica X2 Edition Fedrigoni, The Paper Skin. The Leica X2 Edition "Fedrigoni" has been produced as a limited series of 25 cameras. It is the first Leica camera clad in a "paper skin" and wrapped in 15 quality designer papers. The shimmering, pearlescent Fedrigoni paper "Constellation Jade" replaces the traditional leather trim of the camera and becomes a part of the product. This means the paper had to satisfy the incredibly high quality demands that Leica Camera places on its materials: In a 16-stage test process, "Constellation Jade" successfully withstood a barrage of tests, including rapid and slow temperature changes from −40 to +70 °C, exposure to acetone and 400 wear intervals. The paper achieved outstanding test results for wear and acetone resistance, and is every bit equal in this respect to even the best leather varieties:

Using @font-face The @font-face rule allows custom fonts to be loaded on a webpage. Once added to a stylesheet, the rule instructs the browser to download the font from where it is hosted, then display it as specified in the CSS. Without the rule, our designs are limited to the fonts that are already loaded on a user's computer, which vary depending on the system being used. Here's a nice breakdown of existing system fonts.