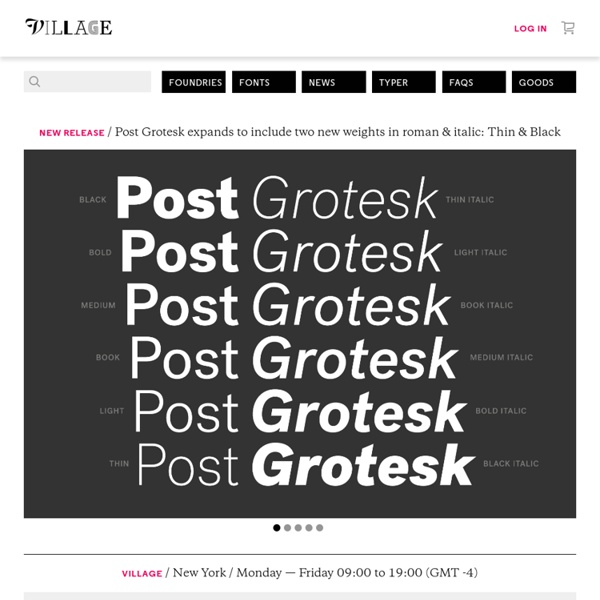 A tutorial for good typography in InDesign - Setting up a baseline grid Good clean typography is a fundemental skill of any designer. Most designers believe they have good typography but in my experience it is something which is developed through time and experience. I think we all begin our design lives with a desire to be outrageously creative, and only as we mature, begin realise that simplicity and structure is just as, if not more important. In this article, I will go through some simple steps to acheive good clean well structured typography in Adobe Indesign. The first step is to choose your typefont. ReTypes Weblog Richard Wolfstrome is an award-winning graphic designer based on Brighton (UK). He has used our Kade family to design a set of very effective posters for “The Dowsing Sound Collective” – a dynamic 120-voice choir and band. You can also take a look to his Behance, it’s full of gorgeous works. April 2, 2014 Bas van Vuurde is a talented graphic designer and typographer who runs a studio in the city on Haarlem. He has recently designed a graphic identity for “De Vrijplaats” (a rehabilitation center).

10 Display Faces that Digital Forgot Because of your enthusiastic response to my last column, I’ve moved up its sequel. In this installment, I’ll be looking at display and decorative faces that were somehow left in the archives when the winds of digital technology swept through the dusty vaults of yesteryear’s metal type foundries. Of all the thousands of typefaces that are created each year, the lion’s share are display and decorative faces. That’s because these are easier to create than text faces (almost anything goes), and changing fashion demands novel looks at dizzying speeds. 14 Articles Showcasing Excellent Typography Typography has always been a fascination of mine. The simple changes that designers are able to make to spice up a font into something totally different is magical. In this post, Designussion showcases several articles that really show off what other designers have been able to achieve.

Klim Type Foundry - Lettering & Logotypes Under direction from Kevin Wilson & Mark Leeds. For Spark. Under direction from Kane McPherson & Shabnam Shiwan at Saatchi & Saatchi. For Z Zegna. 10 Essential Books on Typography by Maria Popova What Arab culture has to do with industrial ideals, midcentury design and Victorian hand-lettering. Whether you’re a professional designer, recreational type-nerd, or casual lover of the fine letterform, typography is one of design’s most delightful frontiers, an odd medley of timeless traditions and timely evolution in the face of technological progress. Today, we turn to 10 essential books on typography, ranging from the practical to the philosophical to the plain pretty.

Typographer's Glossary Serif: Serif's are semi-structural details on the ends of some of the strokes that make up letters and symbols. A typeface that has serifs is called a serif typeface (or seriffed typeface). Some of the main classifications of Serif type are: Blackletter, Venetian, Garalde, Modern, Slab Serif, Transitional, and Informal. Fonts in each classfication share certain similiar characteristics including the shape or appearance of their serifs. LETTERSTREAM INSPIRATION AND IMAGES collected from around the internet. If you know who created an image, or if you’d like to submit something, contact us. Stuart Brown, Hamburger Fonts

How to Speak Typography: Terms You Should Know If you are just beginning as a graphic designer, you should be knee-deep in typography, learning how to use it properly and how to speak about it using proper terminology. This is by no means an exhaustive list of typographic terms, but getting to know these and how to apply them will go a long way toward developing anyone as a typographer and designer. Baseline The invisible line upon which the letters of a typeface rest. Letters with flat bottoms (E) are normally flush with the baseline, while curved characters normally descend below it (and also ascend above the cap height).

Wenting Zhang's 100 days project Typedia In a nutshell, Typedia is a community website to classify typefaces and educate people about them. Think of it like a mix between IMDb and Wikipedia, but just for type. How to Choose the Right Typeface for Your Website – ExpandTheRoom – Medium 3. Solve for your project’s unique challenges. Each typeface has specific features to solve unique design challenges. Some typefaces are better suited for your project than others. Here’s a few bells and whistles to look for before committing to a typeface: superfamilies, optical sizes, a range of widths and weights, language support, and font features.

Has sources of fonts... Not sure it has free ones though... by jordisunshine Jan 28