The Complexity of the Creative Personality 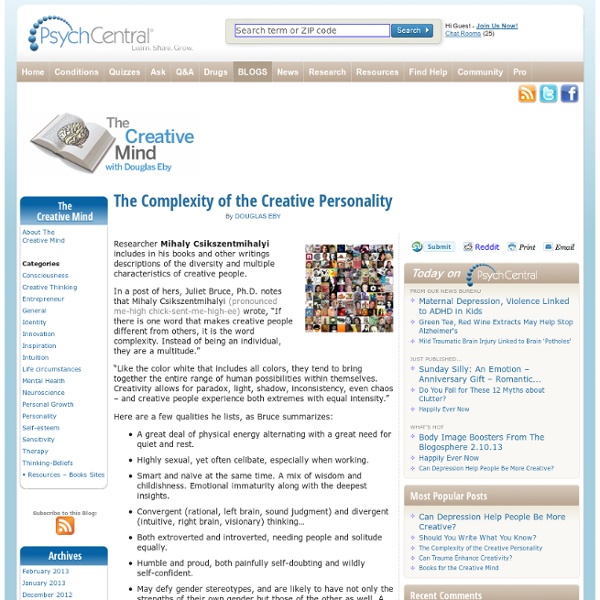 Researcher Mihaly Csikszentmihalyi includes in his books and other writings descriptions of the diversity and multiple characteristics of creative people. In a post of hers, Juliet Bruce, Ph.D. notes that Mihaly Csikszentmihalyi (pronounced me-high chick-sent-me-high-ee) wrote, “If there is one word that makes creative people different from others, it is the word complexity. Instead of being an individual, they are a multitude.” “Like the color white that includes all colors, they tend to bring together the entire range of human possibilities within themselves. Creativity allows for paradox, light, shadow, inconsistency, even chaos – and creative people experience both extremes with equal intensity.” Here are a few qualities he lists, as Bruce summarizes: A great deal of physical energy alternating with a great need for quiet and rest.Highly sexual, yet often celibate, especially when working.Smart and naïve at the same time. Do you relate to any of these qualities?

Top 10 Strange Phenomena of the Mind Humans The mind is a wonderful thing – there is so much about it which remains a mystery to this day. Science is able to describe strange phenomena, but can not account for their origins. While most of us are familiar with one or two on this list, many others are mostly unknown outside of the psychological realm. We have all some experience of a feeling, that comes over us occasionally, of what we are saying and doing having been said and done before, in a remote time – of our having been surrounded, dim ages ago, by the same faces, objects, and circumstances – of our knowing perfectly what will be said next, as if we suddenly remember it! Déjà vu is the experience of being certain that you have experienced or seen a new situation previously – you feel as though the event has already happened or is repeating itself. Déjà vécu (pronounced vay-koo) is what most people are experiencing when they think they are experiencing deja vu. Jamie Frater Jamie is the founder of Listverse.

Ab Exercise STOP! Don’t do another crunch ab exercise. You have alternatives Abs are the most sought after body part. Below are some ab exercises that I love to do. Take your time as you learn each ab exercise. What’s Your Favorite Ab Exercise? Plank Pose Start- Start in an upper push-up position. Go For It- Stay in this position as long as possible. Tips and Techniques- – Remember to breathe! – Pull your belly button into your spine. – If you feel this ab exercise in your lower back, lift your derriere up into the air a bit. – When you cannot hold on for another second, come down to all fours (hands and knees). – Plank Pose and Child’s Pose are two of many yoga poses that I use in my trainings. – This is my favorite ab exercise of all time. Leg Lowering Start- Begin by laying on your back. Go For It- Very slowly begin to lower your legs so that they are almost touching the ground. – Inhale as you lower your legs to the ground. – You should feel this ab exercise in your lower abs. Reverse Crunch Bicycle

Da Vinci's Ghost: How The Vitruvian Man Came To Be by Maria Popova Fifteen centuries of combinatorial creativity, or what Leonardo’s to-do list has to do with ancient Rome. In the first century B.C., at the dawn of the Roman imperial age, the architect and thinker Vitruvius proposed that the human body could fit inside a circle, symbolic of the divine, and a square, associated with the earthly and secular — an idea that later became known as the theory of the microcosm, and came to power European religious, scientific, and artistic ideologies for centuries. Lester observes: At a superficial level, [Vitruvian Man] is simply a study of individual proportions. The story, spanning a wealth of disciplines, cultures, and eras, unfolds through two parallel threads — one tracing Leonardo’s individual journey, and one weaving together the collective narrative of the people and ideas who filled and filtered the fifteen centuries between Vitruvius and Da Vinci. These notes reveal Leonardo in his perpetually ravenous information-gathering mode.

Letters From Strangers: 8/8/10 - StumbleUpon Transcription:"My Dearest Stranger, People wait lifetimes and pay thousands for a chance like this. A chance to pour their heart out to someone without fear of judgement. Everyone has a story. Your loving Stranger." Be a stranger! Questionnaires for Writing Character Profiles - Creative Writing Help Enter your e-mail to get the e-book for FREE. We'll also keep you informed about interesting website news. "I have searched the web and used different worksheets, but none have come close to your worksheets and descriptions of (what to do and what not to do). Both courses I have taken have with Creative Writing Now have been amazing. "As usual - I already love the course on Irresistible Fiction, rewriting a lot and improving greatly even after the first lesson. “Essentials of Fiction proved that I could indeed write and I wrote every day, much to my boyfriend's dismay (waa sniff).” - Jill Gardner "I am loving the course and the peer interaction on the blog is fantastic!!!" "I'm enjoying the weekly email course, Essentials of Poetry Writing. "Thank you for all the material in this course. "I was pleasantly surprised at the quality of the lessons and feel they were very helpful in introducing new ideas and perspectives to my writing. "Thanks very much for this course. "Thank you so much!!

Traveling Lightly Through Life | zen habits ‘A good traveler has no fixed plans, and is not intent on arriving.’ ~Lao Tzu Editor’s note: This is a guest post from Francine Jay of Miss Minimalist. I’m often asked what inspired me to become a minimalist. The answer: I fell in love with traveling lightly. After over-packing on a few trips—and suffering the misery of lugging around a heavy suitcase—I vowed never to check a bag again. The experience was exhilarating! I began to edit the contents of my home with the same fervor as I had my suitcase. Lighten your load Excess possessions are like excess luggage: they can tie us down, get in the way, and drain our sense of energy and adventure. Conversely, the less stuff we have to worry about, the more nimble we become—and the better able to embrace new opportunities and experiences. To regain our freedom, we simply need to lighten our loads. Start with a clean slate. Question every item. Set limits. Use modules. Think versatility. Digitize. Live on the edge. Lighten your step

Systems thinking, Systems being and Love StumbleUpon I met god the other day. I know what you're thinking. How the hell did you know it was god? Well, I'll explain as we go along, but basically he convinced me by having all, and I do mean ALL, the answers. Every question I flung at him he batted back with a plausible and satisfactory answer. In the end, it was easier to accept that he was god than otherwise. Which is odd, because I'm still an atheist and we even agree on that! It all started on the 8.20 back from Paddington. What did he look like? Well not what you might have expected that's for sure. 'Anyone sitting here?' 'Help yourself' I replied. Sits down, relaxes, I ignore and back to the correspondence on genetically modified crops entering the food chain... Train pulls out and a few minutes later he speaks. 'Can I ask you a question?' 'Why don't you believe in god?' The Bastard! I love this kind of conversation and can rabbit on for hours about the nonsense of theist beliefs. But then I thought 'Odd! 'And why should I believe that?' He did.

Chekhov's gun: a useful plot device. By Glen C. Strathy Chekhov's Gun is a plot device whereby you introduce an item in the first part of your novel that doesn't seem important to the story at the time, but takes on greater significance later on. The principle was expressed by the great Russian playwright, Anton Chekhov, who said that if you put a gun on stage in the first act of a play, it should be fired in the second act. According to some sources, he also expressed this in the negative form as: don't put a gun on stage in the first act unless you intend to have it fired in the second. Some writers try to follow this dictate very rigorously and avoid mentioning any object unless it will play a major role in the story, but that is really taking things too far. I believe Chekhov used the example of a gun because a gun isn't just any object. So if you do draw attention to an object, your readers will expect this object to appear again. Here are several ways you can employ Chekhov's Gun: 1. Mrs. 2. 3. Chekhov's Gun vs.

That’s Not OCD, You’re Just a Slacker Of all the random pictures floating about the internet that I’ve run into in the past few weeks, this is the one that really got me: Here’s the text: A 23-year old medical student makes lists of all the tasks that he must accomplish each day. He spends hours studying and refuses to go out with his colleagues even when there are no tests on the immediate horizon, preferring to spend his time looking at specimens in the laboratory. He keeps meticulous notes during all his classes and prefers to attend every lecture, not trusting his colleagues to take notes for him. He is doing well in school and has a girlfriend who is also a medical student. Even I, Mr. The medical student in this essay question doesn’t have obsessive-compulsive disorder, it’s just that in the age of slackerdom and ADD, diligence and focus looks like OCD. If you’d like to read more about how effort trumps talent, take a look at Malcolm Gladwell’s Outliers, K. So bravo, unknown psych student with a blue pen.