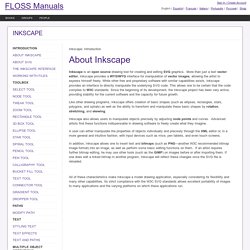 More than just a text vector editor, Inkscape provides a WYSIWYG interface for manipulation of vector images, allowing the artist to express himself freely. While other free and proprietary software with similar capabilities exists, Inkscape provides an interface to directly manipulate the underlying SVG code. This allows one to be certain that the code complies to W3C standards. Since the beginning of its development, the Inkscape project has been very active, providing stability for the current software and the capacity for future growth.

Like other drawing programs, Inkscape offers creation of basic shapes (such as ellipses, rectangles, stars, polygons, and spirals) as well as the ability to transform and manipulate these basic shapes by rotation, stretching, and skewing. Inkscape also allows users to manipulate objects precisely by adjusting node points and curves. Artist Uses Home Sewing Machine To Capture Nature’s Most Delicate Forms With Embroidery. Embroidery art often seeks to mimic nature, but Australian visual artist Meredith Woolnough has a special technique we’ve never seen before. 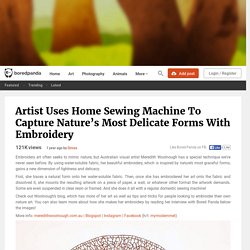 By using water-soluble fabric, her beautiful embroidery, which is inspired by nature’s most graceful forms, gains a new dimension of lightness and delicacy. First, she traces a natural form onto her water-soluble fabric. Then, once she has embroidered her art onto the fabric and dissolved it, she mounts the resulting artwork on a piece of paper, a wall, or whatever other format the artwork demands. Some are even suspended in clear resin or framed. And she does it all with a regular domestic sewing machine! Check out Woolnough’s blog, which has more of her art as well as tips and tricks for people looking to embroider their own nature art. 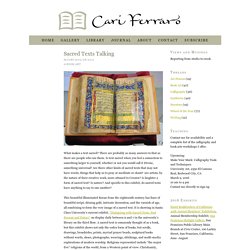 There are probably as many answers to that as there are people who use them. Is text sacred when you feel a connection to something larger to yourself, whether or not you would call it Divine, something universal? Are there other kinds of sacred texts that may not have words, things that help us to pray or meditate or chant? Are artists, by the nature of their creative work, more attuned to Creator?

Is laughter a form of sacred text? This beautiful illuminated Koran from the eighteenth century has lines of beautiful script, shining gold, intricate decoration, and the varnish of age, all combining to form the very image of a sacred text. I am happy to be part of the conversation, with my book The First Writing (seen above in the bottom left corner) contributing a view of the spiritual source of writing by our earliest ancestors.

The third center case is filled with small devotional prayer books, which make a fine counterpoint to the two large volumes. Wendy White And Five Other Artists Deconstruct Text In Paintings. Text phrases, words and letters abound in contemporary art, ranging widely from direct witty phrases to text that has become illegible in its adaptation. 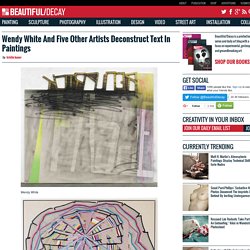 With increased crossover between different fields of art, the craft of editing text in literary arts is a skill and practice that has been incorporated into the visual arts more frequently. Jenny Holzer is an artist who comes to mind in this regard. However, in this article I am examining the other polarity of text in art. As an artist who regularly uses text in my own art work, I am always interested in discovering the ways in which other artists step beyond the all too prevalent witty-one-liner on the wall into an artistic language that is far more expansive and uniquely cultivated. The artists included here demonstrate the beautiful grey area that emerges between abstract painting, graffiti, constructivist painting and the written word, to name a few. The papercut works of artist Annie Vought seem familiar and almost impossible. 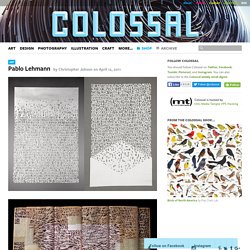 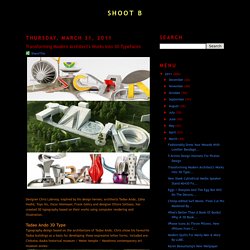