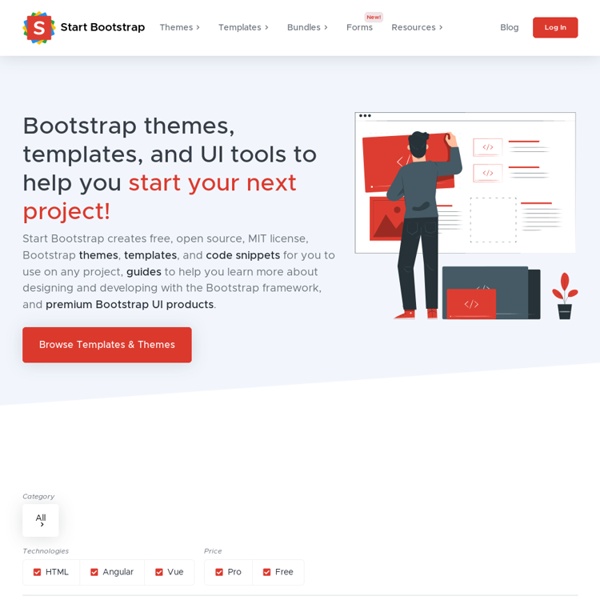 20 Free & Premium Bootstrap Templates Are you looking for top notch HTML templates that would best fit your plans? Converting templates for WordPress or any other CMS platform? Don’t know where to start? We are here to help you creative professionals make your job easier. The best thing is that they are all entirely free, so you can just try and try every single one of them an see what suits your needs best. We all know how hard it is to get that perfect template that express our idea to the world.

The College Admissions Story Every Student Should Read  This post was written by Kevon Manners, a rising junior at Queens College. It was originally published on The Prospect, a college admissions and high school/college lifestyles website. You can follow Kevon on Twitter and The Prospect on Facebook or Twitter. So last week I finished my sophomore year of college. 8 annoying Windows 10 problems and how to fix them Here are some of the biggest Windows 10 problems, and how to get around them. Windows 10 has proven to be a fine upgrade over Windows 8.1 and Windows 7, but despite having been on the market since July there are still some issues that many people are encountering. Some of them are flaws, some are features, but all have had people scratching their heads. So, here are some of the most annoying Windows 10 problems, and how to fix them. 1.

QueryLoader2 – Preload your images with ease Gaya Design is back in business and hitting hard with a redo of the 2009 script QueryLoader. I kept getting e-mails and comments about it and thought I had left it just hanging there for way too long. It had become very outdated. So here it is: version 2 of QueryLoader! A direct link to the zipfile: View the example here: Bootstrap Toolbox - Tools, Utilities, Generators and Templates Ever since it was initially released, Bootstrap has taken the internet by a storm. It keeps growing in popularity with each passing day — and why shouldn’t it be popular? After all, where else do you find a responsive framework with such an extensive library of pre-styled components, and a community that offers many, many extras and addons?

80 Awesome Twitter Bootstrap Templates To Get You Started Twitter Bootstrap is a powerful and easy to use framework enabling front-end developers to craft professional and high quality Bootstrap templates with flexible responsive layouts that look great on tablets, mobiles and desktops. Since its release back in august 2011 the development community has been growing fast, providing developers with the tools and knowledge to create ready-to-use, native Bootstrap html/CSS templates or themes that work on popular publishing platforms like WordPress and Joomla. One of the main reasons why Bootstrap is so popular is the ability to develop web apps and websites fast and its support for responsive design. When compared to other responsive CSS frameworks available it is also one the most mature frameworks with the largest user base at the moment, which certainly will have a positive effect on how mobile friendly websites are build. To help you get started, I have collected a list of my favorite Twitter Bootstrap templates. Article Index

Which Is Right for Me? 22 Responsive CSS Frameworks and Boilerplates Explained CSS frameworks have been around for years now, but the arrival of responsive design practices has rendered many of our old favorites useless. Fortunately, lots of really talented developers have jumped in to fill the gap with the next generation of CSS frameworks and boilerplates. There’s already a ton of these things floating around. XPath Examples Note that indexes are relative to the parent. Consider the following data: The remaining examples refer to the Sample XML file for XPath. To demonstrate the union operation, we use the following XPath expression: x | y/x selects all the <x> elements whose values are green or blue in the following XML file: