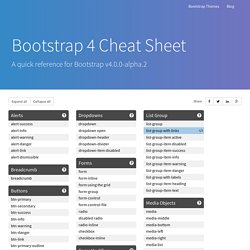 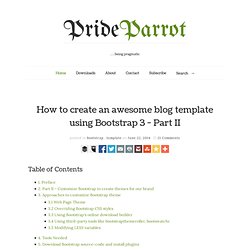 Preface Hi folks, I hope it didn't take too long to publish this second part. I was quite busy with a mobile app that came on the way (still working on it) that delayed things little. Thanks for everyone who showed interest in this tutorial. Do you know, your comments are the food for my "How to" tutorials. 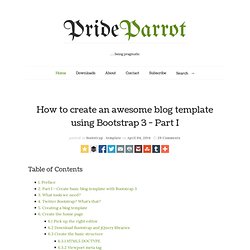 Preface Are you one who doesn't have great design skills but looking for stuff to create nice templates in a short time? Are you one who recently heard about this nice framework called Twitter Bootstrap and don't have much knowledge or experience to customize and create some website that represents your brand? Well folks, this tutorial is for you. Actually, this is not just a tutorial but workshop. "Give a man a fish and you feed him for a day. Due to time constraint and content size, I've divided this workshop into two parts. In the second part, which is going to be more interesting one, where we'll see, how we can download the Bootstrap source code and customize it to create our own theme that matches our imagination. 2. As I already said, in this part, we'll create the basic blog template using Bootstrap 3 that includes all the pages required for a typical blog like home, single-post, contact and about me pages. Rapid web development with Bootstrap.

Browser developers are finally converging in their support for standards such as HTML5, Cascading Style Sheets Level 2 (CSS2), and CSS3. 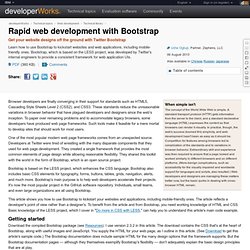 These standards reduce the unreasonable variations in browser behavior that have plagued developers and designers since the web's inception. To paper over remaining problems and to accommodate legacy browsers, some developers have produced web page frameworks. Such tools make it feasible for a mere mortal to develop sites that should work for most users. One of the most popular modern web page frameworks comes from an unexpected source. Developers at Twitter were tired of wrestling with the many disparate components that they used for web page development. Bootstrap is based on the LESS project, which enhances the CSS language. How to Create Form Layouts with Twitter Bootstrap 3 - Tutorial Republic. In this tutorial you will learn how to create elegant forms with Bootstrap. 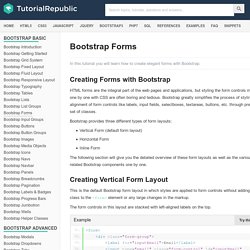 Creating Forms with Bootstrap HTML forms are the integral part of the web pages and applications, but styling the form controls manually one by one with CSS are often boring and tedious. Bootstrap greatly simplifies the process of styling and alignment of form controls like labels, input fields, selectboxes, textareas, buttons, etc. through predefined set of classes. Bootstrap provides three different types of form layouts: Vertical Form (default form layout) Horizontal Form Inline Form The following section will give you the detailed overview of these form layouts as well as the various form related Bootstrap components one by one.

Creating Vertical Form Layout This is the default Bootstrap form layout in which styles are applied to form controls without adding any base class to the <form> element or any large changes in the markup. Bootstrap Form Validation Done Right in AngularJS. Using AngularJS with the Bootstrap CSS framework makes it trivially simple to implement form validation on your site. 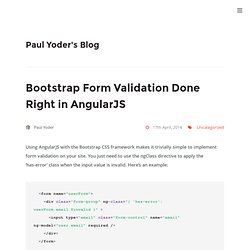 You just need to use the ngClass directive to apply the ‘has-error’ class when the input value is invalid. Here’s an example: What is not trivially simple is to have your form validation actually provide a good user experience (e.g. the input box above is highlighted invalid before the user even has a chance to enter anything). So I want to share the process I went through to create a custom Angular directive that provides a great user experience.

Others have also written about creating better experiences for form validations, but I have still found them lacking. The directive itself is called showErrors, and it can be downloaded through Bower with angular-bootstrap-show-errors. First Attempt As I already mentioned, most people’s first attempt at form validation with AngularJS involves the ngClass directive coupled with the $invalid property on the form control. Getting started. Bootstrap is downloadable in two forms, within which you'll find the following directories and files, logically grouping common resources and providing both compiled and minified variations. jQuery required Please note that all JavaScript plugins require jQuery to be included, as shown in the starter template. Consult our bower.json to see which versions of jQuery are supported.

Precompiled Bootstrap Once downloaded, unzip the compressed folder to see the structure of (the compiled) Bootstrap. Copy.