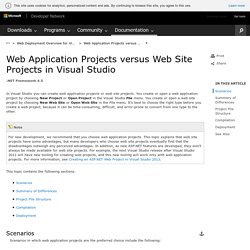 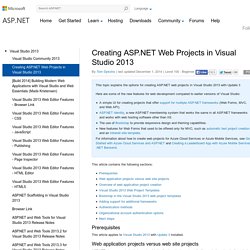 ASP.NET Identity, a new ASP.NET membership system that works the same in all ASP.NET frameworks and works with web hosting software other than IIS. The use of Bootstrap to provide responsive design and theming capabilities. New features for Web Forms that used to be offered only for MVC, such as automatic test project creation and an Intranet site template. Components.

Available glyphs Includes over 250 glyphs in font format from the Glyphicon Halflings set. 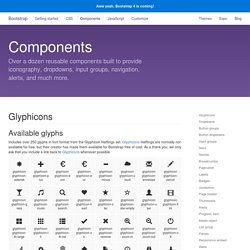 Glyphicons Halflings are normally not available for free, but their creator has made them available for Bootstrap free of cost. As a thank you, we only ask that you include a link back to Glyphicons whenever possible. How to use For performance reasons, all icons require a base class and individual icon class. Don't mix with other components Icon classes cannot be directly combined with other components. Only for use on empty elements Icon classes should only be used on elements that contain no text content and have no child elements. Changing the icon font location Bootstrap assumes icon font files will be located in the .. Change the @icon-font-path and/or @icon-font-name variables in the source Less files. Use whatever option best suits your specific development setup. Accessible icons Modern versions of assistive technologies will announce CSS generated content, as well as specific Unicode characters. 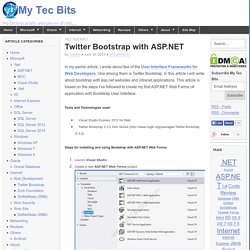 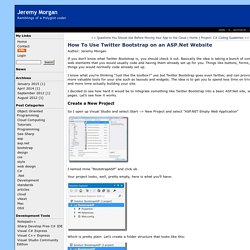 Basically the idea is taking a bunch of commonly used web elements that you would usually code and having them already set up for you. Things like buttons, forms, and other things you would normally code already set up. I know what you’re thinking “Just like the toolbox?” Yes but Twitter Bootstrap goes even farther, and can provide even more valuable tools for your site such as layouts and widgets. I decided to see how hard it would be to integrate something like Twitter Bootstrap into a basic ASP.Net site, with master pages. Create a New Project So I open up Visual Studio and select Start –> New Project and select “ASP.NET Empty Web Application” I named mine “BootstrapASP” and click ok.

Your project looks, well, pretty empty, here is what you’ll have: Create Clean Webpages with Twitter Bootstrap. Introduction Do you need to a lay out a webpage in a clean and straightforward way? 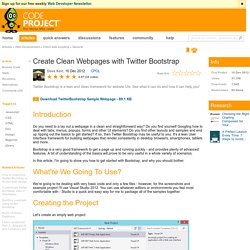 Do you find yourself Googling how to deal with tabs, menus, popups, forms and other UI elements? Do you find other layouts and samples and end up ripping out the basics to get started? If so, then Twitter Bootstrap may be useful to you. It's a lean User Interface framework for building webpages that render consistently in desktop browsers, smartphones, tablets and more.

Bootstrap is a very good framework to get a page up and running quickly - and provides plenty of advanced features. In this article, I'm going to show you how to get started with Bootstrap, and why you should bother. What're We Going To Use? We're going to be dealing with very basic code and only a few files - however, for the screenshots and example project I'll use Visual Studio 2012. Creating the Project Let's create an empty web project: We should have something pretty clean and lean, like so: <! This is the basic project structure. <! <! <! <!