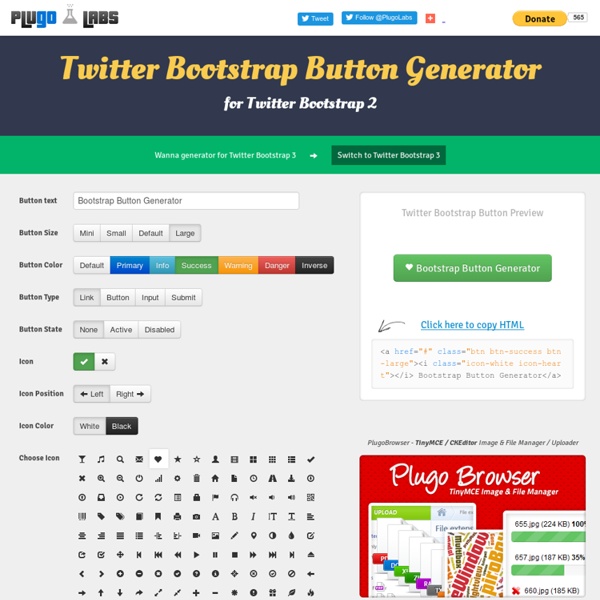 20 Awesome Resources for Twitter Bootstrap Lovers Generators Bootstrap Custom Build Before diving into great third party Bootstrap resources, it’s worth pointing out a great little tool right from Twitter that allows you to completely customize an impressive range of Boostrap features so that you can create a custom build that’s perfect for your project. 15 Great Twitter Bootstrap Resources Twitter Bootstrap is a great front-end framework that lets you quickly prototype new web projects. Here is a list of great resources that gives even more power to the Bootstrap framework. Fuel UX extends Twitter Bootstrap with additional lightweight JavaScript controls.

❍ IcoMoon IcoMoon is striving to build and provide the best iconography and icon management tool for perfectionists. IcoMoon's icon library features only the very best icon sets out there. All of our icons are designed on a precise pixel grid. The IcoMoon app lets you build and use your own icon sets in many different formats including SVG, Polymer, PDF, XAML, CSH, icon font or simple PNG/CSS sprites. IcoMoon was first built and released back in the November of 2011.

Bootstrap Form Builder Rendered source of your form: About Created By Adam Moore (@minikomi) to help take the stress out of writing all that markup to get bootstrap forms together. The original version of this was a big jQuery spaghetti mess, so as of March 2013 it has been rewritten using backbone.js and takes advantage of underscore.js templates. How To Create Animated List View Using CSS3 Only Listing items with some optional list view is a good practice to make user more comfortable on viewing our item list and it will be more nice to add some animation when they change the list view. In this post we are going to create an animated list view using pure CSS3 only. Four List View There will be four list view for the list item : image with text in three column, text only, image with text in one column and image only. The default view is the first one, so our list item will have three column with each column contains image and text parallel. For the controller of our view, we’re using four radio button.

Twitter Bootstrap 3 Tutorial - An Ultimate Guide for Beginners Bootstrap is the most popular and powerful front-end (HTML, CSS, and JS) framework for faster and easier responsive web development. If you're completely new to the Bootstrap we recommend you to start with the section that covers Bootstrap Basics and gradually move forward, by learning a little bit every day. Tip:Since every chapter in this tutorial is somewhat related to each other. So it's a good idea to make sure that you have understood the each topic very clearly before moving on to the next chapter or section.

How to use Twitter Bootstrap to Create a Responsive Website Design "Welcome to the responsive web!" In the last year or so this term has been thrown around everywhere, so often that even a lot of my clients are asking for a responsive design from the get go. This, to me, is really interesting because they never asked for a mobile or tablet version back in the day. One would argue that mobile wasn't so mainstream and everybody was trying to imitate the IOS interface on the web, and I agree, it was bad, but that's not the only reason why clients are asking for responsive!?

Loading Effects for Grid Items with CSS Animations Some inspiration for loading effects of grid items using CSS animations. View demo Download source Today we’d like to share some loading effects for grid items with you. The idea is to show items in a grid with an animation once they are in the viewport. The possibilities are infinite and we’d like to give you some inspiration. Some of the effects are from the awesome CSS3 scroll effects by Hakim El Hattab and the idea is inspired by the tile animation seen in the Google Plus app. 56 Pure CSS Effects Javascript Alternatives Including Demos Cascading Style Sheet (CSS) is a document format which provides a set of style rules which can then be incorporated in an XHTML or HTML document. It is a means to separate web content from formatting and presentation information. Although CSS is generally considered a simple and straightforward language, sometimes it requires creativity, skill and a bit of experimentation. The good news is that designers and developers worldwide often face similar problems and choose to share their insights and workarounds with the wider community.

Getting started Bootstrap is downloadable in two forms, within which you'll find the following directories and files, logically grouping common resources and providing both compiled and minified variations. jQuery required Please note that all JavaScript plugins require jQuery to be included, as shown in the starter template. Consult our bower.json to see which versions of jQuery are supported. Precompiled Bootstrap Once downloaded, unzip the compressed folder to see the structure of (the compiled) Bootstrap. Building Responsive Layouts in Liferay with Twitter Bootstrap - Xtivia Blogs Twitter Bootstrap is a popular, easy-to-use front-end framework that not only allows for rapid prototyping, but also comes with a robust set of features that let you easily implement a responsive design. If you're building a site from scratch, all you have to do is include the Bootstrap CSS and JavaScript, and you're off to the races! When you're working with Liferay, though, it's a bit more complicated than that.