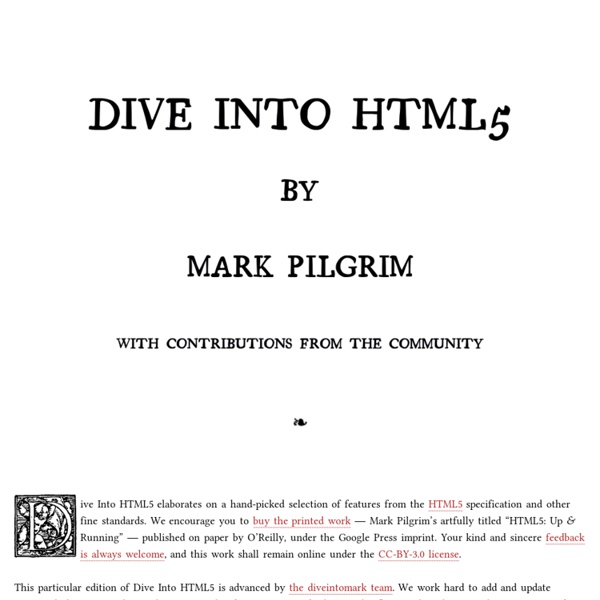 Dive Into HTML5 elaborates on a hand-picked selection of features from the HTML5 specification and other fine standards. We encourage you to buy the printed work — Mark Pilgrim’s artfully titled “HTML5: Up & Running” — published on paper by O’Reilly, under the Google Press imprint. Your kind and sincere feedback is always welcome, and this work shall remain online under the CC-BY-3.0 license. This particular edition of Dive Into HTML5 is advanced by the diveintomark team. We work hard to add and update content, links, APIs, and actively maintain this fine resource; refreshing and reflecting the relevant and current state of HTML5, just as Mark Pilgrim did during his tenure. We attribute this work in the manner specified by Mark, and we make modifications to the site's content.

Prototype v1.7.1 API documentation Event.observe(element, eventName, handler) → Element element (Element | String) – The DOM element to observe, or its ID. eventName (String) – The name of the event, in all lower case, without the "on" prefix — e.g., "click" (not "onclick"). handler (Function) – The function to call when the event occurs. Registers an event handler on a DOM element.

A Handful Of CSS Trends And How To Use Them There are a handful of CSS and CSS3 trends that are making their way across the web. Find out how to use them on your site… As I make my daily web travels, I’m constantly keeping an eye out for any trends or cool effects that other blogs are taking advantage of. Slider with Sliding Backgrounds Among the many super nice design features of the Yahoo! Weather app for iOS is the transition between city screens. The background image doesn't just move away as the screen moves from one screen to the next, the background image itself slides. It appears to be hiding some of the "old" screen and revealing more of the "new" screen those closer you have it to being in full view.

HTML5 Presentation In March 1936, an unusual confluence of forces occurred in Santa Clara County. A long cold winter delayed the blossoming of the millions of cherry, apricot, peach, and prune plum trees covering hundreds of square miles of the Valley floor. Then, unlike many years, the rains that followed were light and too early to knock the blossoms from their branches. Instead, by the billions, they all burst open at once. Seemingly overnight, the ocean of green that was the Valley turned into a low, soft, dizzyingly perfumed cloud of pink and white.

HTML5 Presentation In March 1936, an unusual confluence of forces occurred in Santa Clara County. A long cold winter delayed the blossoming of the millions of cherry, apricot, peach, and prune plum trees covering hundreds of square miles of the Valley floor. Then, unlike many years, the rains that followed were light and too early to knock the blossoms from their branches. Instead, by the billions, they all burst open at once. Seemingly overnight, the ocean of green that was the Valley turned into a low, soft, dizzyingly perfumed cloud of pink and white.

C# Tutorials (C#) The C# tutorials provide an overview of the basics of the language and identify important language features. Each tutorial includes one or more sample programs. The tutorials discuss the sample code plus provide additional background information. They also link to the corresponding sample abstract topics, where you can download and run the sample programs. See Also Learn CSS Positioning in Ten Steps: position static relative absolute float 1. position:static The default positioning for all elements is position:static, which means the element is not positioned and occurs where it normally would in the document. Normally you wouldn't specify this unless you needed to override a positioning that had been previously set. Build an Infinite Scrolling Photo Banner With HTML and CSS Today we’re going to embark on the challenge of creating an animated banner of photos that automatically scrolls horizontally through an infinite loop. The best part: we’re going to do it without a single line of JavaScript. To make this banner truly useful, our goal will be to use individual photos dropped into our HTML, not simply one long CSS background that repeats. This is pretty tricky but we’ll walk you through exactly how it works.

10 Myths About Public Education I want to state ahead of time that I am a libertarian. I believe in limited government. I believe in the rights of the individuals. However, unlike this woman, I do not see the corporate buying of public schools as an element of libertarianism or even capitalism. Government-sponsored capitalism is actually closer to a fascist economic philosophy than anything else. Note to fellow self-proclaimed libertarians: read the Founding Fathers. Stitches - An HTML5 sprite sheet generator Drag & drop image files onto the space below, or use the “Open” link to load images using the file browser. Then, click “Generate” to create a sprite sheet and stylesheet. This demo uses a couple of HTML5 APIs, and it is only compatible with modern browsers.

Learn HTML5 - Game Development Course Online When does the course begin? This class is self paced. You can begin whenever you like and then follow your own pace. It’s a good idea to set goals for yourself to make sure you stick with the course. Designing Websites for All Screen Resolutions Tutorial on Designing for 800 x 600, 1024 x 768, 1280 x 1024 and higher Designing web sites to fit all resolutions is a very important web design principle. Try out the Entheos site in all resolutions higher than 800 x 600 and you will find that it is designed to fit the page exactly. Therefore, visitors who have higher resolution can see more content in one page which reduces scrolling. Most web sites are designed for only one resolution.

How to Create an Awesome Scrolling Navigation using jQuery - thebeebs I was looking over the .net award nominees this week and stumbled across the flipboard.com website. I loved the scrolling navigation so much I just had to open up visual studio and try and recreate it myself. DemoView Demo The main thing flipboard do differently is to have the logo and logo background elements move at different animation speeds from each other and the main content.