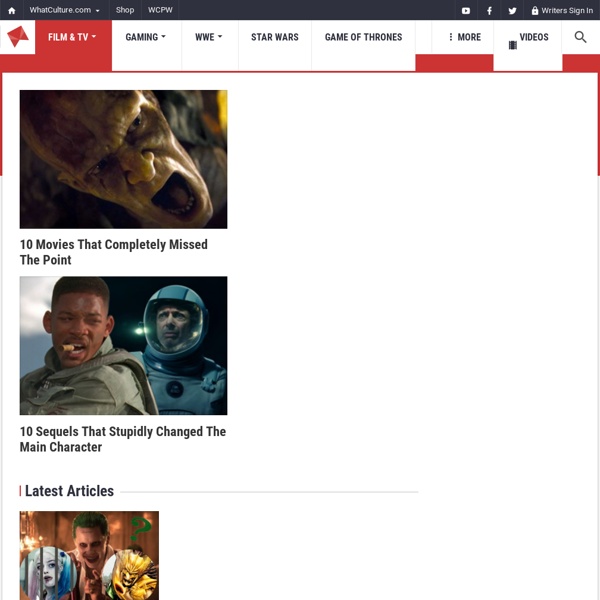 20 Stupidest Wrestling Questions Fans Ever Asked "Did The Undertaker really kill his parents in a fire?" 10 TV Shows That Made Death Meaningless Shuffling off the mortal coil is just a mere inconvenience to some. WWE: 10 Best Ladder Matches Ever Yes, Shawn Michaels features a lot...

Spin-off.fr : Actualités, audiences, critiques, notes et calendrier de vos séries TV ! In Contention — Film Awards – Film Festivals – Interviews – Film Reviews – Movie News There is no press release planned for this news but I wanted to pass it along to our readership in any case. After seven years of owning and operating In Contention, first as a blogspot thingamajig, then guiding the .com forward as (I think) one of the preeminent awards season outlets in the space, I’m happy to announce that our little company has been formally acquired by HitFix. The final signatures were committed to paper just after Telluride, which is serendipitous as at last year’s fest, just before the premiere of “Albert Nobbs,” Greg Ellwood first bent my ear and told me his ideas. Then, three swift weeks later — a year ago today, in fact — we officially hitched our wagon to HitFix. These last 12 months have been kind of a trial run, if you will.

Doctor Who In 1989, something terrible happened: they stopped making Doctor Who. For the next sixteen years, except for a truly agonizing Eastenders crossover and 75 minutes with Paul McGann, the TARDIS disappeared from our screens. Luckily, for those of us who were of a mind to care about such things, WH Allen, the west London publishing form that had been novelising the TV show, won the rights to publish original novels, and continued the story of the seventh Doctor and Ace after the end of the TV show. With an audience composed more of adult fans than children, the New Adventures were more adult/adolescent (delete to taste) than the TV show that had spawned them, featuring, in no particular order, sex, swears, steampunk, space marines and rather a lot of existential angst. This series, and the various others that followed, not only gave the fans something to fill the long interregnum.

Zoomacom First Pics Of André 3000 As Jimi Hendrix - Films It was just a few weeks back when news broke that André 3000 was going to play rock legend Jimi Hendrix in a new biopic. It seems as if the project is moving rather swiftly as pictures have just emerged of the Outkast frontman on set in almost-full costume. The film, called All Is By My Side, focuses on the late sixties when Hendrix was originally discovered and his ensuing time in London. It's currently being shot in Dublin. Whether or not the film will include any actual Hendrix music is still unsure following various legal difficulties with his estate. They're going to need to sort that out...

Jon Crispin's Notebook Willard Suitcases / Anna H / Talk in Albany After a bit of a break, we were back to shooting more of the suitcases yesterday. It was a productive day, and after the intensity of the Kickstarter appeal, it was nice to be back to doing what is the most important part of the project. Brain Pickings FirstShowing.net Cultural Criticism from the World of Pop. Reviews, Essays, and Ideas in Culture, Music, Film TV, Books, Games, Comics Web Design Ledger - Web Design Blog Reviews, News, Humor, Top 10 Lists a geography project about architectural enthusiasm