How to make chrome faster rendering in zenfone 2-Fan Chat. Hi all,at the moment,chrome blacklisted certain hardware aceleration in powervr rogue due to report of problem displaying image n words. upon inspecting,i realise its due to old graphic driver for powervr g6430 which using 1.3 version driver and opengl 3.0. while our powervr g6430 already updated to driver 1.4 version and support opengl 3.1. i did try out the websites that have problem when hardware accelerated enable previously,only can appear correctly if using software acceleration n software rasterization. but with newer driver version 1.4,the image n words appear correctly under hardware acceleration. intel try to rework with adding zero copy rasterization when using software acceleration(intel cpu) cuz it also effect intel hd gpu in baytrail n etc. 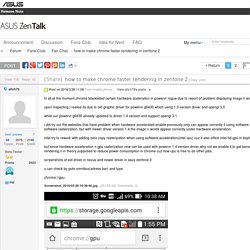 Untitled. My laptop overheated a few times recently due to high gpu temperature. 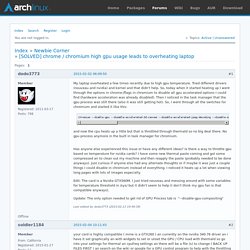 Tried different drivers (nouveau and nvidia) and kernel and that didn't help. So, today when it started heating up I went through the options in chrome:/flags in chromium to disable all gpu accelerated options I could find (hardware acceleration was already disabled). Then I noticed in the task manager that the gpu process was still there (also it was still getting hot). So, I went through all the switches for chromium and started it like this: A new compression algorithm for the internet. Google's new algorithm will make Chrome run much faster. Chrome is about to load web pages a lot faster than you've experienced up until now. 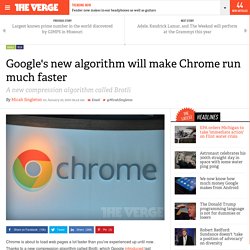 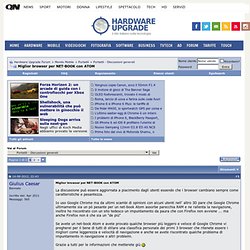 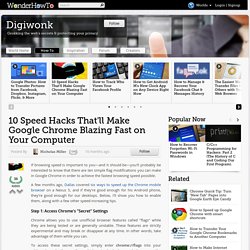 A few months ago, Dallas covered six ways to speed up the Chrome mobile browser on a Nexus 5, and if they're good enough for his Android phone, they're good enough for our desktops. Below, I'll show you how to enable them, along with a few other speed-increasing tips. How To Speed Up Internet Browsing On Google Chrome for Android. Browser for Android got replaced by Chrome, and it is heavier than browser and it can be vary slow and unresponsive while loading a webpage or scrolling. 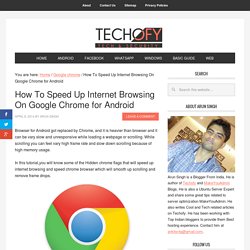 While scrolling you can feel vary high frame rate and slow down scrolling because of high memory usage. 10+ Killer Tips to Make Google Chrome Super Fast on Desktop. If you have been using Google Chrome as your default web browser intentionally, you are already aware that Chrome performs better (most of the times) than other browsers in terms of rendering speed. 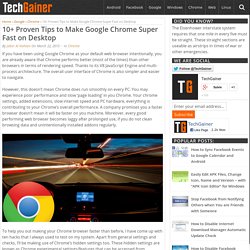 Thanks to its V8 JavaScript Engine and multi-process architecture. The overall user interface of Chrome is also simpler and easier to navigate. However, this doesn’t mean Chrome does run smoothly on every PC. Google Chrome Includes 5 Browser Plug-ins, and Here’s What They Do. Google wants to get rid of browser plug-ins, but they’re bundling quite a few with Chrome itself. 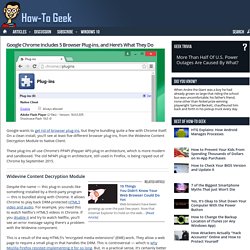 On a clean install, you’ll see at least five different browser plug-ins, from the Widevine Content Decryption Module to Native Client. These plug-ins all use Chrome’s PPAPI (Pepper API) plug-in architecture, which is more modern and sandboxed. The old NPAPI plug-in architecture, still used in Firefox, is being ripped out of Chrome by September 2015. Widevine Content Decryption Module Despite the name — this plug-in sounds like something installed by a third-party program — this is bundled along with Chrome. This is a result of the way HTML5’s “encrypted media extensions” (EME) work.

This plug-in is only activated when you access a DRM-protected media stream that requires it — like Netflix, for example. Native Client Native Client is a Google-created technology that allows developers to take C or C++ code and compile it to run in a web browser. Adobe Flash Player. Improving Chrome Flash Performance / Clearing Cache discussion on Kongregate. Improving Performance – Google Chrome There’s a few options hidden in google chrome you can tweak to enhance performance of the browsers handling of flash. 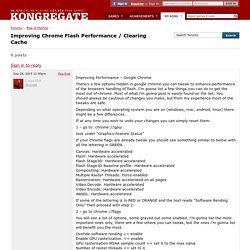 I’m gonna list a few things you can do to get the most out of chrome. Most of what i’m gonna post is easily found on the net. You should always be cautious of changes you make, but from my experience most of the tweaks are safe. Depending on what operating system you are on (windows, mac, andriod, linux) there might be a few differences. Chrome - Chrome Performance Tweaks and Text Enhancements. Chrome and Chromium Performance Tweaks Chrome has always been one of the fastest browsers around, mainly because Google is constantly working on improvements to HTTP 1.0. 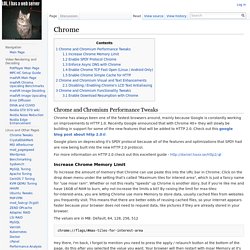 Recently Google announced that with Chrome 40+ they will slowly be building in support for some of the new features that will be added to HTTP 2.0. Check out this google blog post about http 2.0. Google plans on deprecating it's SPDY protocol because all of the features and optimizations that SPDY had are now being built into the new HTTP 2.0 protocol. For more information on HTTP 2.0 check out this excellent guide - How do I reduce/avoid the heavy CPU usage of Google Chrome in Ubuntu? - Quora. Wrong way, not relevant. Rasterization. After upgrading to Google Chrome 41 there are annoying rendering tiles at the bottom (or top) of the page during scrolling.

The following image depicts the problem (I mean the checkered area inside the yellow box): To fix that issue, copy this link into a new tab and change the Enable GPU rasterization setting from Default to Force-enabled for all layers. After that you have to click the Relaunch now button at the very bottom of the page. If you also want a smoother scrolling experience, you can Enable the zero-copy rasterizer and set the Number of raster threads to the highest value in the dropdown list (e.g. 4) That’s all, happy scrolling!