Learn How to Sell. Why does Google Chrome keep crashing in Windows? When Google Chrome chronically crashes it may tempt you to consider that degenerate browser known as Internet Explorer. 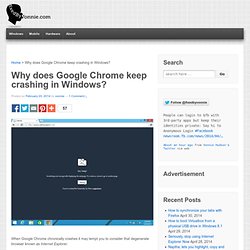 Yikes. If reading the phrase “Internet Explorer” wasn’t enough to bristle the hair on body then someone should check your pulse because you’re dead. Internet Explorer categorically sucks. Oka, wait – that was mean - let me qualify my vilifying remarks by saying that Internet Explorer 10 and older sucks. IE11 is an improvement to the beleaguered league of Microsoft browsers; however, it still hasn’t usurped the browser gold from Chrome yet. Nonetheless, when Chrome starts uttering weird things like “Aw, Snap!” First check out the official list of Chrome’s crashes and errors. The most common reason for Chrome crashes are: Corrupt profilesConflicting modulesBad ExtensionsOutdated softwareDamaged files Let’s run through each: 1.

Google Chrome is chock full of hidden features and profiles is just another one of them. Click Start and enter this: %LOCALAPPDATA%\Google\Chrome\User Data\ Apache OpenOffice Draw. The powerful graphics package Draw - from a quick sketch to a complex plan, Draw gives you the tools to communicate with graphics and diagrams. 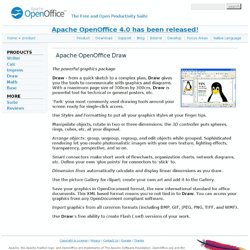 With a maximum page size of 300cm by 300cm, Draw is powerful tool for technical or general posters, etc. 'Park' your most commonly used drawing tools around your screen ready for single-click access. Use Styles and Formatting to put all your graphics styles at your finger tips. Manipulate objects, rotate in two or three dimensions; the 3D controller puts spheres, rings, cubes, etc. at your disposal. Arrange objects : group, ungroup, regroup, and edit objects while grouped. Smart connectors make short work of flowcharts, organization charts, network diagrams, etc.

Dimension lines automatically calculate and display linear dimensions as you draw. Use the picture Gallery for clipart; create your own art and add it to the Gallery. Save your graphics in OpenDocument format, the new international standard for office documents. 5 Ways to Change Background Color and Image of All Pages in Google Chrome. Google Chrome browser has been one of the most popular internet browsers in a short period, meanwhile, widescreen monitors are used by most of those who are using desktop computer as the device for internet surfing, most monitors have a resolution higher than 1280×1024 pixels, some of us are using 1920×1200, 1920×1080, 1680×1050. 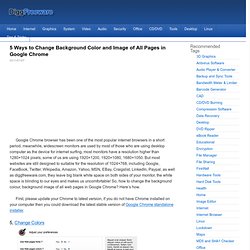 Simple Chrome black background dark theme extension - How to build one in 5 minutes. There are times when a white background is best replaced with a black one. 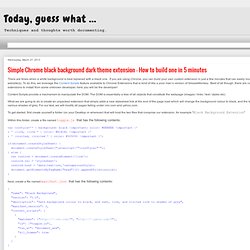 If you are using Chrome, you can build your own custom extension in just a few minutes that can easily modify colours of your favourite website(s). To do this, we leverage the Content Scripts feature available to Chrome Extensions that is kind of like a poor man’s version of GreaseMonkey. Best of all though, there are no closed custom 3rd party Chrome extensions to install from some unknown developer, here you will be the developer!

Content Scripts provide a mechanism to manipulate the DOM. The DOM is essentially a tree of all objects that constitute the webpage (images / links / text / styles etc). What we are going to do is create an unpacked extension that simply adds a new stylesheet link at the end of the page load which will change the background colour to black, and the text/link/visited-link colours to various shades of grey. Next, create a file named manifest.json that has the following contents: How to Create Custom Chrome Web App Shortcuts For Your Favorite Websites. Google is now pushing Chrome packaged apps, but many Chrome apps are still shortcuts to websites. 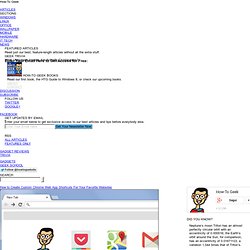 You can make your own custom web apps that function as shortcuts if the website you want isn’t available in the Chrome Web Store. These Chrome web apps will also appear in the Chrome app launcher on Windows, Mac, Linux, and Chrome OS. You’ll be able to open them from the launcher and set them to always open as a window or pinned tab — you can’t do that with standard bookmarks.